TOKYO (CNS) — “Golden is thy fame, indeed,” the University of Notre Dame in Indiana tweeted July 25 after Lee Kiefer, class of 2017, won the gold medal in women’s foil fencing at the Tokyo Games. She beat defending champion Inna Deriglazova of Russia 15-13. Kiefer, 27, is the first American, male or female, to win an individual Olympic medal in foil fencing. “It’s such an incredible feeling that I share with my coach, I share with my husband, with my family, just everyone that’s been a part of this,” Kiefer was quoted as saying in an Indianapolis Star story. “I wish I could chop it (the medal) up in little pieces and distributed it to everyone I love.” Now a medical student at the University of Kentucky College of Medicine, Kiefer was the fifth-ranked foilist in the world going into the Olympics. Tokyo was her third trip to the Summer Games; she competed in London in 2012 and Rio de Janeiro in 2016; she placed fifth in foil in 2012 and 10th in 2016. Eight of the members of the USA Fencing team have a Notre Dame connection, including Mariel Zagunis, class of 2008, who was the first American to win a gold medal in Olympic fencing, in Athens in 2004.

German bishop: Floods’ damage to souls might be worse than property issues

TRIER, Germany (CNS) — Dealing with the aftermath of the recent floods in parts of Germany will be a long-haul effort for people, said Bishop Stephan Ackermann of Trier, whose diocese was one of the worst-hit regions. The German Catholic news agency KNA reported that in a July 30 letter to Christians in the diocese, Bishop Ackermann said it would take a long time to clear up the damage and rebuild the local infrastructure. But patience will be needed “perhaps even more for the internal injuries and burdens which the disaster inflicted on souls and which perhaps are not yet externally visible,” he added. Bishop Ackermann stressed that in addition to providing direct help, the task for the Church was to “create spaces and opportunities that give room to what was experienced and suffered, so that it can be put into words of grief and lament, of questions and gratitude,” KNA reported. Germany’s churches plan to hold an ecumenical service in Aachen cathedral Aug. 28 to commemorate the at least 160 victims of the flooding in the country, announced the German bishops’ conference and the Protestant Church in Germany. Bishop Georg Bätzing, president of the German bishops’ conference, and Bishop Heinrich Bedford-Strohm, head of the Protestant council, will lead the service. Representatives of other religions, relatives of the victims, helpers, emergency pastoral workers and political leaders, along with representatives from neighboring countries hit by the flooding are expected to attend.

Ledecky gives shout out to her grandparents after winning Olympic gold

WASHINGTON (CNS) — U.S. swimmer Katie Ledecky won the Olympic gold medal July 28 for the women’s 1,500-meter freestyle, a new event, on the heels of coming in fifth place in the 200-meter freestyle. The 24-year-old swimmer, who went to a Catholic elementary school and high school in Maryland, told reporters at the Tokyo Olympics after her comeback that the most pressure she feels is the pressure she puts on herself. “People maybe feel bad for me not winning everything, but I want people to be more concerned about other things going on in the world,” she said. The win — completed in 15 minute and 37 seconds — was Ledecky’s sixth Olympic gold. Erica Sullivan of the U.S. won silver and Sarah Kohler of Germany won the bronze. In the hour between the two races when she swam in the warm-down pool, she said she focused on her grandparents. This emphasis coincidentally was just days after the Catholic Church celebrated its first World Day for Grandparents and the Elderly. In his homily for the July 25 celebration, Pope Francis wrote that grandparents are a “precious source of nourishment.”

VATICAN CITY (CNS) — When Father Anthony Li Hui was ordained a bishop July 28 in the cathedral of the Diocese of Pingliang, China, he became the fifth Chinese bishop appointed under the terms of a Vatican-China agreement signed in 2018 and renewed in 2020, the Vatican press office said. Bishop Li was appointed coadjutor bishop of Pingliang by Pope Francis Jan. 11, 2021, said Matteo Bruni, director of the Vatican press office. He eventually will succeed Bishop Nicholas Han Jide, who is 81 years old and has led the diocese since 1999. Bishop Han was one of the concelebrants of Bishop Li’s ordination. Bishop Li was born in 1972 in Mei County, Shaanxi province, and, after completing his studies at the diocesan seminary in Pingliang and at the national seminary, he was ordained to the priesthood in 1996. The Vatican-China provisional agreement outlines procedures for ensuring that Catholic bishops are elected by the Catholic community in China and approved by the pope before their ordinations and installations. Vatican officials have said that giving up full control over the choice of bishops would not be what the Vatican hoped for, but that the agreement was a good first step toward ensuring greater freedom and security for the Catholic community in China.

YANGON, Myanmar (CNS) — The Catholic Church is lending a hand to people affected by the coronavirus in Myanmar as the country’s health system struggles to cope with a record wave of COVID-19 infections. Ucanews.com reported that St. Joseph’s Catholic Major Seminary in Yangon has been converted into a care center and currently accommodates 50 people in serious condition, needing oxygen support. More beds are being arranged to accommodate 70 people in the seminary because more than 50 people have been on the waiting list, Church officials said. Another 50 people have been admitted in the Epiphany Church compound in Yangon, while a seminary in Thanlyin, a port city near Yangon, is being converted into a care center. More care centers are being opened in Catholic dioceses such as Myitkyina, Lashio and Taungngu, ucanews.com reported.

Faith helps guide cyclist on the road to her Olympic dream

INDIANAPOLIS (CNS) — The road ahead is a busy and joyful one for 28-year-old Coryn Rivera, starting with the dream that she has been racing toward since she was 10: representing the United States as an Olympic athlete in cycling, the sport she loves. Rivera lived that dream July 25 when she competed in the road race at the Summer Olympics in Tokyo, speeding along a 140-kilometer course — about 87 miles. Although she finished seventh and out of the running for a medal, Rivera in an interview ahead of her event called it “a huge honor” to be competing in the Tokyo Games. “I’m proud of my country. I’m proud of where I grew up,” said Rivera, a 2015 graduate of Marian University in Indianapolis. She lives in Tustin, California, where she and her family have been longtime members of St. Thomas More Parish. Besides cycling, her Catholic faith has had a big impact on her life. “I grew up in a Catholic family, and I’m still practicing,” said Rivera, the daughter of two immigrants from the Philippines who met in the United States. “It’s the backbone of my family. It’s given me guidance. It’s given me hope and faith in what we’re going through. God has always led our family. It’s kept us really strong.” 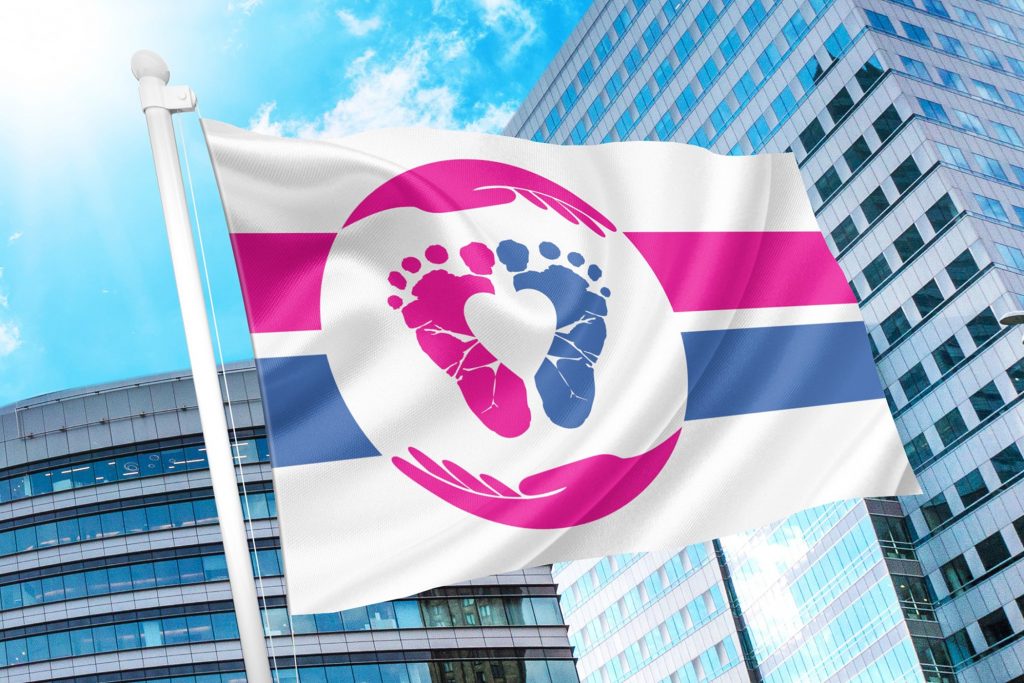 Nanda Gasperini, a pro-life graphic artist in São Paulo, Brazil, designed this pro-life flag, seen in this undated photo. It was selected in an online vote in mid-July 2021 as the international symbol of the pro-life movement. (CNS photo/courtesy Pro-Life Flag Project)