VATICAN CITY (CNS) – At a pre-trial hearing in Hong Kong, a judge set a five-day trial for Cardinal Joseph Zen Ze-kiun and four other defendants who face charges of failing to properly register a now-defunct fund to help anti-government protesters. According to an Aug. 9 report by the Hong Kong Free Press news agency, Magistrate Ada Yim announced that the trial will take place on Sept. 19-23 after asking prosecutors and the defendants’ lawyers if five days would be sufficient for the court to hear the case. Both sides agreed. The 90-year-old cardinal was detained on May 11 under China’s national security law. However, he and the four others were charged with failing to properly register the 612 Humanitarian Relief Fund, set up to offer financial assistance to those involved in anti-government protests in 2019. It was disbanded last year after coming under scrutiny by authorities. Lawyers for both sides will argue whether the 612 Humanitarian Relief Fund fell under Hong Kong’s Societies Ordinance, which regulates registered and exempted associations. The Hong Kong Free Press reported that prosecutors and defense lawyers also will argue whether the defendants held any positions of authority within the relief fund.

ALEXANDRIA, Va. (CNS) – Yogi Berra, Gil Hodges, Derek Jeter, Babe Ruth, Whitey Ford, and Connie Mack were among the first-place winners Catholic voters chose in online balloting for an all-time Catholic baseball all-star team. Nearly 2,000 Catholic baseball fans across the country cast their votes in a ballot hosted by Catholic Athletes for Christ. The Alexandria-based nonprofit organization hosted the online voting platform during June and July, and 1,969 fans selected their top choice at each baseball position, including three selections for outfielder and pitcher, as well as for manager, general manager, and broadcaster. Winners were announced on July 19. The platform included links to background information on all 92 candidates on the ballot; it also identified players as members of the Baseball Hall of Fame and noted if they were members of the Knights of Columbus. “The all-time Catholic baseball all-star team campaign created a buzz on social media and highlighted just how many great players were practicing Catholics,” Ray McKenna, President and Founder of Catholic Athletes for Christ, said in a statement. “The winners in each category represent the very best players in baseball history and Catholic gentlemen both on and off the baseball diamond,” he said.

CHICAGO (CNS) – Liberty Counsel, a Christian legal group, announced that a settlement it called historic has been reached with an Illinois hospital system over denying its employees a religious exemption to the COVID-19 vaccine mandate. The NorthShore University HealthSystem has agreed to pay out more than $10.3 million in a “historic, first-of-its-kind class-action settlement” against a private employer, the group said. The settlement was filed on July 29 in the U.S. District Court for the Northern District of Illinois’ eastern division. The Evanston-based health care system, which recently merged with Edward-Elmhurst Health, is the third-largest health care delivery system in the state. It has nine hospitals and more than 300 local offices offering various clinical services; the merged system now stretches across six northeast Illinois counties. The court must approve the settlement, the Chicago-based Liberty Counsel said in a statement. “Employees of NorthShore who were denied religious exemptions will receive notice of the settlement,” it said, “and will have an opportunity to comment, object, request to opt out, or submit a claim form for payment out of the settlement fund, all in accordance with deadlines that will be set by the court.”

WASHINGTON, D.C. (CNS) – Each year at back-to-school-time, many parents are in sticker shock about school-supply costs. This year, with inflation, is no exception as parents pay more for everything from notebooks to backpacks and calculators. Never mind shoes and clothes, and for some, laptops. The National Retail Federation reported in June that school-supply prices were expected to increase by 40 percent and one loan company said 37 percent of parents with school-age children said they are unable to afford back-to-school shopping. Last year, many families had help with these purchases through the government’s monthly payments with its child tax credit. This year, not only are families feeling the pinch, but service agencies are seeing a decrease in donations. Catholic Charities agencies around the country are helping with annual school-supply drives to get backpacks and notebooks in the hands of as many students as possible. “Unfortunately, the decrease in donations makes it harder to serve those that are in need the most,” said Amy Lambert, community resources coordinator for Catholic Charities in the Diocese of Joliet, Illinois.

LAGOS, Nigeria (CNS) – Nigerian officials identified six suspects arrested in connection with the June 5 attack that killed 40 people at St. Francis Catholic Church in Owo. Maj. Gen. Jimmy Akpor, Defense Department Spokesman, said all were linked to the Islamic State West Africa Province group. He said the arrests were made through a joint effort of military and defense officials. Akpor said a preliminary investigation showed that “Idris Abdulmalik Omeiza was the mastermind of the terror attack on the Catholic Church in Owo as well as the attack on a police station” in Kogi state on June 23. In the second attack, a police officer was killed and weapons were stolen. Omeiza is sometimes known as Bin Malik. Police also arrested Momoh Otohu Abubakar, Aliyu Yusuf Itopa, and Auwal Ishaq Onimisi for the Owo attack, in which attackers sneaked into a Pentecost Mass with explosives. Akpor confirmed on Aug. 10 that the four were arrested on Aug. 1. On Aug. 11, Akpor said officials had arrested two more suspects: Al-Qasim Idris and Abdulhaleem Idris. Officials did not release a motive for the attack.

Amid Grief and Loss, Long-Term Recovery is on Horizon for Eastern Kentucky

LEXINGTON, KY. (CNS) – Mother of Good Counsel Church in Hazard, Kentucky, tolled its bell as Mass ended on Aug. 7, while parishioners named a litany of communities devastated by deadly flooding at the end of July. The Mass began with a candle lighting in memory of the 37 confirmed deaths when floodwaters swept away whole communities in eastern Kentucky. The paschal candle burned in memory of those still missing. “You could see it was emotional for those who were affected,” said Lori Helfrich, the Parish Life Director. During the litany, “people named the places as they came (to mind) and the community said, ‘We remember.’ Everyone can tell you about someone who has lost their house and nearly everyone can tell you about someone who has died or is missing or unaccounted for,” she said, noting that three parish families had to abandon their homes. “It’s important to do that ritual piece because it helps us process it and it says we’re not forgetting this.” Helfrich hopes everyone continues to remember eastern Kentucky for at least the next year, as people and their communities recover. “It will be a long haul,” she said. “There truly is a lot of destruction. It looks like the remnants of a tornado or a hurricane.” Donations to recovery efforts can be made at catholiccharitieslexington.org. Designate contributions for disasters.

VATICAN CITY (CNS) – Pope Francis called on the international community to help the people of Somalia who are at risk of famine due to severe drought. “The populations of this region, who already live in very precarious conditions, now find themselves in mortal danger due to drought,” the pope said on Aug. 14 during his Sunday Angelus address. “I hope that international solidarity can respond effectively to this emergency,” he said. “Unfortunately, war diverts attention and resources, but these are the objectives that demand the utmost commitment: the fight against hunger; health; and education.” According to an Aug. 5 report by the U.N. Food and Agriculture Organization, the rise in food insecurity brought on by the drought has caused “more than 900,000 people to flee their homes in search of humanitarian assistance since January last year.” As conditions worsen, “people living in eight areas of the country could be experiencing famine by September,” the organization said. “We cannot wait for famine to be declared; we must act now to safeguard livelihoods and lives,” Rein Paulsen, director of the FAO, said in a statement. “We are deeply concerned about the drought situation and how vulnerable households are being affected.” In an interview with Vatican News published on Aug. 12, Bishop Giorgio Bertin, apostolic administrator of Mogadishu, Somalia, said the drought is “one of the worst in the last 40 years.” 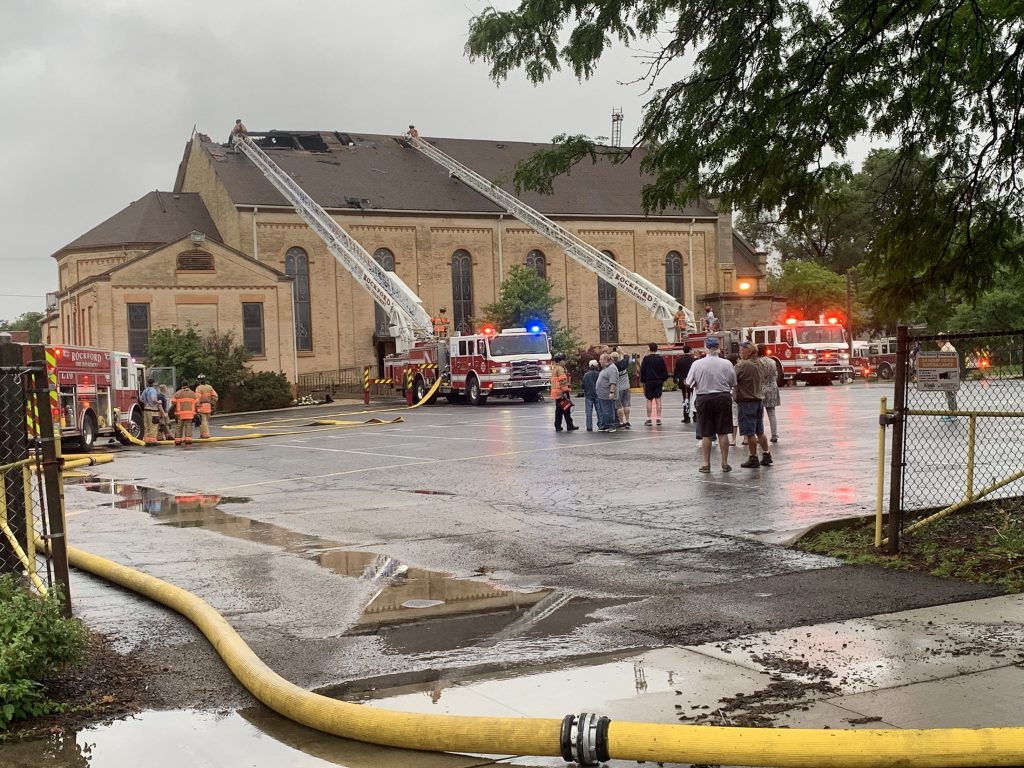 Looking for more hotspots, firefighters cut away sections of the roof at St. James Church in Rockford, Ill. Aug. 8, 2022. Lightning is thought to have caused the three-alarm fire at the 155-year-old Catholic church, the oldest in the city of Rockford.(CNS photo/Penny Wiegert, Diocese of Rockford)