BALTIMORE (CNS) — In an opening address Aug. 7 at the 136th annual Knights of Columbus Supreme Convention, the organizations’ CEO, Carl Anderson, spoke of the charitable works of the Knights, their ongoing pro-life commitment and pledge to support persecuted Christians in Iraq and Syria. Anderson pointed out that the Aug. 7-9 convention in Baltimore was in the birthplace of the Catholic Church in the United States. “It was colonial America’s first diocese and the home of our first American bishop, John Carroll, whose family lived at the intersection of faith and liberty in the new nation. The Catholicism first nourished here in Baltimore contributed to the American experience through other commitments as well — commitments that could be summarized in this simple, but powerful Gospel insight: The person in need that we encounter is not a stranger but a brother or a sister,” he said. The Knights today hold the same view in their charitable giving and volunteering. Anderson said it’s “safe to say that we’ve never had a fraternal year quite like this one.” He said the Knights gave more than $185 million dollars to charity last year, an $8 million increase from the previous year and one of the largest yearly increases in the organization’s history. The Knights also donated more than 75.6 million volunteer hours.

NUBA MOUNTAINS, Sudan (CNS) — A U.S. physician who has won accolades for his service in a war-torn corner of Sudan said he has just done what any missionary is called to do. “I’m a lay missionary. We’re supposed to show the face of Christ to people, but how can you do that if you take off when the going gets tough?” asked Dr. Tom Catena, a 54-year old physician from Amsterdam, New York, sent by the Catholic Medical Mission Board to run the Mother of Mercy Hospital in Gidel, a village in the isolated Nuba Mountains. In 2011, fighting between rebel Nuba forces and the central government in Khartoum grew particularly fierce. The area around the Church-run hospital began to experience intense bombing by the Sudanese Armed Forces. Bishop Macram Max Gassis, then the bishop of El Obeid, which includes the Nuba region, ordered all foreign Church workers, including Catena, to leave. Catena was among a handful who said no. As an American working in the area he has received much attention, something he finds disconcerting because, he said, staff from throughout African and Sudan are working to deliver care just as diligently. “If I can be the one to get the message out,” he said, “to show another face of the Church and the good it’s doing in the world, then let me give it a shot.”

Social justice is built into the Catholic school curriculum

WASHINGTON (CNS) — At many Catholic schools, social justice might not be an assigned class, but it is part of the fabric of what they do throughout the school year from helping those in need to speaking up on social issues. And in the past few years during various protests around the country, Catholic school students have raised their voices or called attention to issues of racism, gun violence, care for refugees or the unborn. This past year was no exception. After the school shooting Feb. 14 at Marjory Stoneman Douglas High School in Parkland, Florida, several Catholic schools across the country sponsored awareness programs for students or provided time for prayer, reflection and action to curb gun violence during the nationwide student-sponsored event called National School Walkout. And weeks after that, Catholic school students also participated in the March for Our Lives events protesting gun violence in Washington and other locations. Mercy High School in San Francisco observed 17 minutes of silence a month after the Florida school shooting and the student body president, Mogan Hildula, said she was confident her generation could make a difference to stop the violence.

WASHINGTON (CNS) — About 30 people from various Catholic organizations came together outside the White House for a prayer service of repentance Aug. 9 for the use of nuclear weapons on Hiroshima and Nagasaki, Japan. At the rally, which lasted about an hour, they called for the United States to apologize and repent of its use of nuclear weapons in the Second World War and for total nuclear disarmament. The atomic bomb was dropped on Nagasaki Aug. 9, 1945, and three days before that Hiroshima was bombed. The peace activists held a similar prayer service of repentance at the Pentagon Aug. 6 in a protest area designated by police. The Aug. 9 event opened with a speech explaining that those there stood with other anti-nuclear movements around the world, including the Kings Bay Plowshares group, which trespassed at a naval submarine base to protest nuclear weapons. The rally featured several pictures of the damage caused by nuclear weapons, both to people and to the buildings in Hiroshima and Nagasaki. People present were members of the Dorothy Day Catholic Worker, Pax Christi Metro-DC, Pax Christi USA, the Columban Center for Advocacy and Outreach, Maryknoll Office for Global Concerns, the Sisters of Mercy-Institute Justice Team, Jonah House, the Assisi Community and the Franciscan Action Network.

TALLAHASSEE, Fla. (CNS) — The Catholic bishops of Florida urged to Gov. Rick Scott to commute the death sentence of Jose Antonio Jimenez to a life sentence without parole. Jimenez is scheduled to be executed Aug. 14 at 6 p.m. local time for the 1992 murder of Phyllis Minas. “Both victims of crime and offenders are children of God and members of the same human family,” said an Aug. 10 letter to Scott on behalf of the bishops by Michael B. Sheedy, executive director of the Florida Conference of Catholic Bishops in Tallahassee. “We appreciate your difficult task as governor and still must ask you to commute this death sentence, and all death sentences, to life without the possibility of parole,” he said. Sheedy cited Pope Francis’ announcement Aug. 2 that he had ordered a change in the Catechism of the Catholic Church declaring that the death penalty is inadmissible in all cases. “This reflects the growing awareness that the dignity of the person is not lost even after the commission of great crimes and that more effective forms of detention have been developed to ensure the due protection of citizens without definitively depriving the guilty of the possibility of redemption,” said Sheedy.

VATICAN CITY (CNS) — On the 40th anniversary of the death of Blessed Paul VI, Pope Francis went into the grotto under St. Peter’s Basilica to pray at his predecessor’s simple tomb. The pope who oversaw the last sessions of the Second Vatican Council and began implementing its teachings died Aug. 6, 1978, at Castel Gandolfo, the papal summer residence outside of Rome. He was buried six days later in the basilica’s grotto. Unlike most of popes buried there, his tomb is in the earth — rather than elevated — and is covered with a simple travertine marble slab. Reciting the Angelus prayer Aug. 5 with visitors in St. Peter’s Square, Pope Francis reminded them of the anniversary and of the fact that he plans to canonize his predecessor Oct. 14. “From heaven may he intercede for the Church he loved so much and for peace in the world,” Pope Francis said. He called asked the people in the square to join him in a round of applause for “this great pope of modernity.” 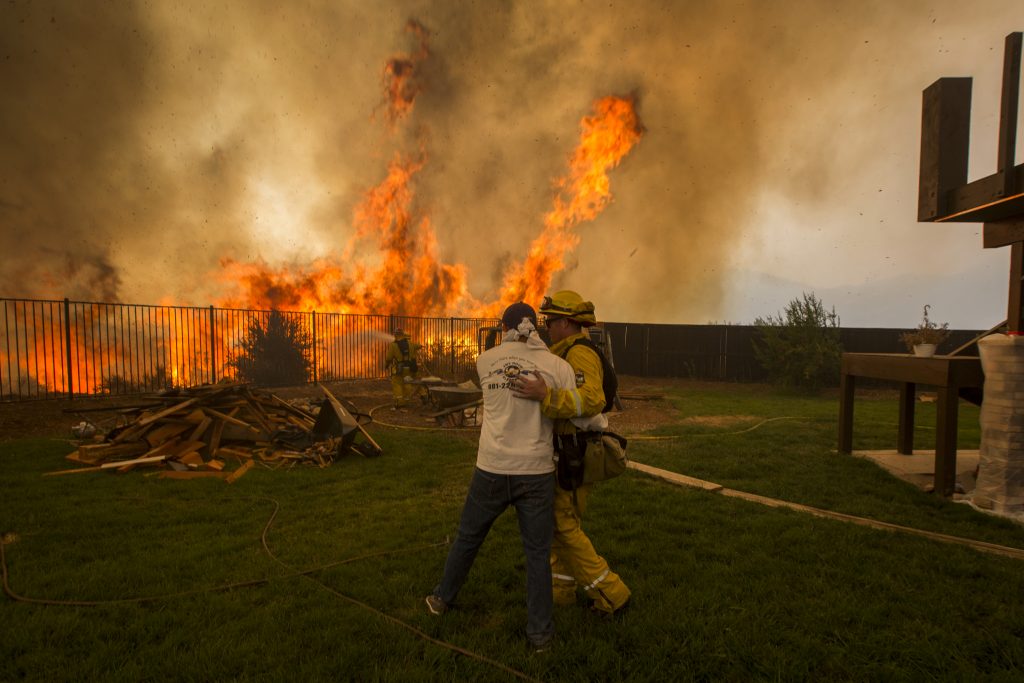 A firefighter consoles a man who is worried that his sister’s house will burn during the Holy Fire Aug. 9 in Lake Elsinore, Calif. The wildfire has ravaged more than 10,000 acres, destroyed at least 12 structures and forced more than 21,000 people to evacuate their homes. (CNS photo/David McNew, EPA)