WASHINGTON (CNS) — Iraqi Christians face “extinction” unless Islam recognizes the fundamental equality of all people and takes steps to overcome violent factions that seek to force religious minorities from the country, said Chaldean Archbishop Bashar Warda of Irbil. “The truth is that there is a foundational crisis within Islam itself, and if this crisis is not acknowledged, addressed and fixed, then there can be no future for civil society in the Middle East or indeed anywhere Islam brings itself to bear upon a host nation,” Archbishop Warda told Aid to the Church in Need. The archbishop voiced his concerns in an interview, the transcript of which was released by the organization Aug. 6, the fifth anniversary of the Islamic State group overrunning Christian communities on the Ninevah Plain in northern Iraq. The Islamic State group’s violence “shocked the conscience of the world” as well as Islamic majority nations, Archbishop Warda said. “The question now,” he said, “is whether or not Islam will continue on a political trajectory, in which sharia is the basis for civil law and nearly every aspect of life is circumscribed by religion, or whether a more tolerant movement will develop.” The archbishop also expressed concern that while the Islamic State group has been defeated in Iraq, the “idea of the re-establishment of the Caliphate” has not subsided.

JAMAICA, N.Y. (CNS) — As the Catholic chaplain at John F. Kennedy International Airport ambled through Terminal 4 on a hot summer afternoon, security personnel, airport employees and flight crews shouted a cheery hello or stopped for a quiet word. “That’s my priest,” one uniformed woman told her companion with a confident nod. The bearded man in a black polo shirt, black trousers and scuffed black Crocs smiled back at them. “There’s no average day here. Most of my ministry happens on the go,” Father Chris Piasta said. He is a priest of the Diocese of Brooklyn, pastor of St. Joseph Parish in Jamaica in the New York borough of Queens and is now in his 10th year as the face of the Catholic Church at the nation’s busiest airport. “It’s a ministry of presence,” Father Piasta said. “At its core is being an open and friendly human being to someone else, being open to the humanity of others and simply embracing their needs at a particular time.” Sometimes that entails giving arriving passengers directions to connecting flights or answering what he says is the most common question, “Where is the nearest restroom?” Sixty million people pass through JFK each year. Most often, the chaplain is ministering to the spiritual needs of some of the airport’s 40,000 employees. Five days a week, Father Piasta celebrates Mass at the small well-lit chapel of Our Lady of the Skies.

EL PASO, Texas (CNS) — Greg Zanis, a carpenter by trade from Aurora, Illinois, has traveled around the country for more than 20 years to place white wooden crosses in memory of shooting victims, and after the mass shootings Aug. 3 and Aug. 4 in El Paso and in Dayton, Ohio, his signature crosses are now in those cities. Zanis, 68, told ABC News the message he wants to send with the crosses is this: “Today it’s the first day they (the victims) get to go to heaven. … they’re not suffering anymore. We’re going to see them again.” To date Zanis, who retired in 2016, has delivered free of charge more than 26,000 of these wooden memorials to the sites of mass murders and other tragedies across the U.S. According to his website, https://zaniscrossesforlosses.org, he made his first memorial cross in 1996, after finding the body of his father-in-law, who was murdered. Zanis was a master carpenter by then and worked on house renovations, but finding his father-in-law dead was “the game changer” for him. “Now all that mattered did not matter anymore. That same year, there were car crashes, murders in Aurora, Illinois, and Greg made the first memorial cross,” the site says. “We know what it means for someone to extend a hand of love. We love to give you a cross,” says his website. “The crosses are intended to provide comfort.”

Teen who died saving classmates in school shooting made a Knight

MINNEAPOLIS (CNS) — As residents of El Paso, Texas, and Dayton, Ohio, mourned the loss of 31 people in mass shootings Aug. 3 and Aug. 4, the Knights of Columbus honored a teen who died in May trying to save the lives of his classmates during a shooting at his suburban Denver high school. Kendrick Castillo, the 18-year-old hero who charged a shooter at STEM School Highlands Ranch in Colorado, posthumously named a Knight of Columbus Aug. 6 at the organization’s Supreme Convention in Minneapolis. Castillo’s parents, John and Maria, also accepted the Caritas Medal on his behalf. It is second-highest honor of the Knights of Columbus. Their son is just the fourth recipient of the award, created in 2013 to recognize extraordinary acts of charity and service. “Kendrick wanted to be a Knight of Columbus because he wanted to help not only people, but his community. And in his last moments, Kendrick Castillo did both,” Supreme Knight Carl A. Anderson said in an address to more than 2,000 convention attendees. Castillo had taken part in 2,600 hours of service with the Knights, along with his father, who belongs to the Knights’ Southwest Denver Council 4844.

Circle of Protection members, others see much to like in budget deal

WASHINGTON (CNS) — There is a lot to like in the two-year budget worked out in Congress and signed by President Donald Trump, according to faith-based institutions that are members of the Circle of Protection. “This is a big deal for the Circle of Protection, a fulfillment of the prayer and promise that the Circle of Protection had prayed for Congress to end sequestration and for Congress to come together for low-income people so that their needs are met,” said Jane Adams, a senior policy adviser with Bread for the World. “It took 10 years, but we’re here.” The U.S. Conference of Catholic Bishops and Catholic Charities USA are members of the Circle of Protection, as is Bread for the World and about 140 other Christian organizations. The budget deal will increase funding across the board for defense and non-defense programs by $320 billion over the next two years. The Circle of Protection had, in March, urged Congress to pass a bipartisan budget agreement. “We believe budgets are moral documents; they reveal our values and show our priorities. Budgets show who and what we view as important,” the letter said. Without a deal, it added, “discretionary funding levels will return to austere levels required by the 2011 Budget Control Act, putting non-defense discretionary programs at risk of deep cuts.” Negotiations are ongoing over what the allocations will be for each of a dozen separate appropriations bills. 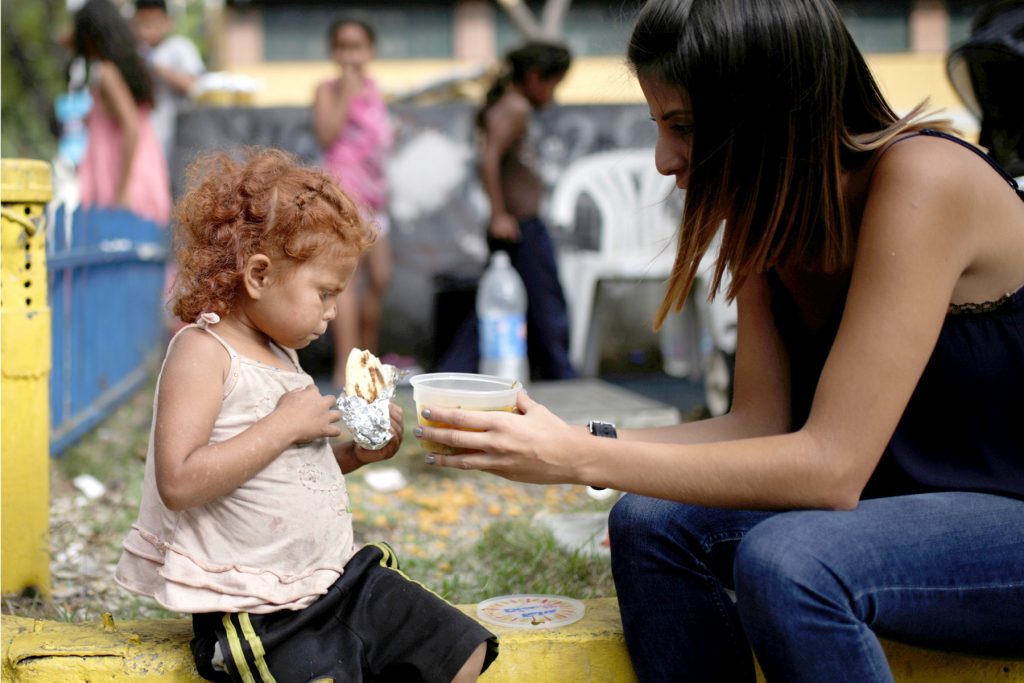 A volunteer with “Make the Difference” charity initiative gives a cup of soup and an “arepa” to a homeless child along a street in Caracas, Venezuela, March 5, 2017. Caracas in recent years has seen tear gas attacks, physical assaults on citizens by government forces, and hungry and malnourished crowds asking for help in streets that once boasted some of the most well-off people in all of Latin America. — CNS photo/Marco Bello, Reuters