NAIROBI, Kenya (CNS) — More than 2 million people in Mozambique, Zimbabwe and Malawi have been affected by a cyclone that has killed more than 700 people, with hundreds still missing in Mozambique and Zimbabwe. The scale of devastation is enormous, said Father Agbonkhianmeghe Orobator, president of the Jesuit Conference of Africa and Madagascar, noting that the “real devastation is the lives that have been lost.” The cyclone, called Idai, lashed Beira, Mozambique with winds of up to 105 miles per hour March 14, then tore inland through Zimbabwe and Malawi. The floods it caused “have wiped out entire villages” and roads; hospitals and schools have been destroyed, Father Orobator said on the website of the Jesuits in the Zimbabwe-Mozambique province. Also on the March 25 website newsletter, Raul Chacuamba, a young Catholic in Beira, Mozambique’s second-largest city that was almost entirely destroyed, said many people “are still with no food and water and it’s dangerous.”

MANCHESTER, England (CNS) — The professional body for doctors in the U.K. dropped its traditional opposition to assisted suicide, despite a poll that found a majority of its members remain opposed to the practice. The Royal College of Physicians declared it has adopted a policy of neutrality, although a majority of doctors said they were against assisted suicide. In a March 21 statement published on the college’s website, Andrew Goddard, college president, said: “Adopting a neutral position will mean that we can reflect the differing opinions among our membership. Neutral means the RCP neither supports nor opposes a change in the law.” A poll of members conducted between Feb. 5 and March 1 found that 31.6 percent were in favor of the college adopting a pro-assisted suicide policy, while 43.4 percent were opposed and 25 percent were neutral. A question asking doctors if they would also like to see British law changed to allow assisted suicide was answered affirmatively by 40.5 percent, while 49.1 percent opposed a law change and 10.4 percent were undecided.

WASHINGTON (CNS) — The nation’s early feminists who fought for women’s suffrage and other rights totally rejected abortion, Serrin Foster, president of Feminists for Life of America, told the Cardinals for Life student group at The Catholic University of America. So the notion today that true feminists support abortion is simply wrong, said Foster, who has led the Virginia-based Feminists for Life since 1994 and is the creator of the “Women Deserve Better” campaign. An audience of about 30 students — young women and men — listened to her speak the evening of March 20 on “The Feminist Case Against Abortion,” a landmark address she has delivered over the last 20 years. Susan D. Anthony, Elizabeth Cady Stanton, Lucretia Mott, Victoria Woodhull, Alice Paul and many others advocated for women’s right to vote and for equality in the law so they could be “self-sustaining and self-reliant” at a time when women weren’t allowed to own property, control their own money or even sit on a jury. They also pushed for an end to slavery. But to a woman, they condemned abortion “in no uncertain terms,” said Foster. Modern feminists such as Betty Friedan, she explained, did not support abortion in their own fight for women’s equality — until the male founders of what became the National Abortion Rights Action League, known today as NARAL Pro-Choice America, persuaded them to include “abortion rights” in their platform.

WASHINGTON (CNS) — Waves of eager chatter filled the Basilica of the National Shrine of the Immaculate Conception in Washington. Then, a triumphant organ chord pierced the air and the procession began. Knights of Columbus in neat sashes, priests and bishops in pristine white vestments, and three American cardinals paced prayerfully down the aisle and slowly ascended to the shrine’s magnificent sanctuary in the Great Upper Church. In their midst were Bishops-designate William J. Muhm and Joseph L. Coffey — two men who would walk out of the church the same day with brand new miters and crosiers, and new responsibilities to their flock that is the U.S. Archdiocese for the Military Services. Army and Navy families, as well as kin of the two to be ordained bishops, packed the middle of the national shrine and waved excitedly as their beloved priests walked by. And so began the afternoon Mass March 25 celebrating the episcopal ordinations of the two men who would soon be officially auxiliary bishops. Their ordination fills the spaces left by former Auxiliary Bishop Robert J. Coyle, who was transferred to the Diocese of Rockville Centre in New York, and Auxiliary Bishop Richard B. Higgins, who is retiring.

COLUMBUS, Ohio (CNS) — Paying tribute to his family history of faith, Bishop Robert J. Brennan of Columbus urged the people of the diocese to appreciate their own faith heritage and pass it on to future generations through everyday sacrifice and concern for others during his installation Mass. “My grandfathers handed on a priceless legacy of faith, hope and love that was passed on to us by my parents,” Bishop Brennan said during his homily at St. Joseph Cathedral March 29. “These are the great treasures, aren’t they? Here for us in the Diocese of Columbus, we too are the heirs … to a wonderful legacy of faith. We stand on the shoulders of the people who built this up for us. And now it’s our turn, It’s our turn as the new generation. The faith they handed on to us — faith, hope and love — these aren’t museum pieces to be admired and watched, but a living encounter with the risen Jesus Christ.” About 800 people, including 35 other bishops, filled the cathedral for the nearly two-hour ceremony, at which Archbishop Christophe Pierre, apostolic nuncio to the United States, read Pope Francis’ Jan. 31 letter appointing Bishop Brennan as the diocese’s 12th bishop. Bishop Brennan had been auxiliary bishop of the Diocese of Rockville Centre, New York, for nearly seven years. He has lived on Long Island his entire life.

VATICAN CITY (CNS) — Iraqis and Syrians returning to their homelands and refugees living abroad need the help of all Catholics and people of goodwill, said the Congregation for Eastern Churches. “Greater cooperation and a generous commitment by Christians all over the world to their brothers and sisters of the Holy Land and the Middle East is needed,” it said in its annual appeal, which the Vatican press office published March 28. In a letter sent to bishops around the world, Cardinal Leonardo Sandri, congregation prefect, asked for continued support for the traditional Good Friday collection for the Holy Land. The collection, taken up at the request of the pope, is administered by the Franciscan Custody of the Holy Land — an administratively autonomous province of the Franciscan order — and the Congregation for Eastern Churches. The congregation monitors how all funds are used and supports projects in the Holy Land, Cyprus, Syria, Lebanon, Egypt, Ethiopia, Eritrea, Turkey, Iran and Iraq.

The Franciscan Custody is responsible for most of the shrines connected with the life of Jesus as well as for providing pastoral care to the region’s Catholics, running schools, operating charitable institutions and training future priests and religious. 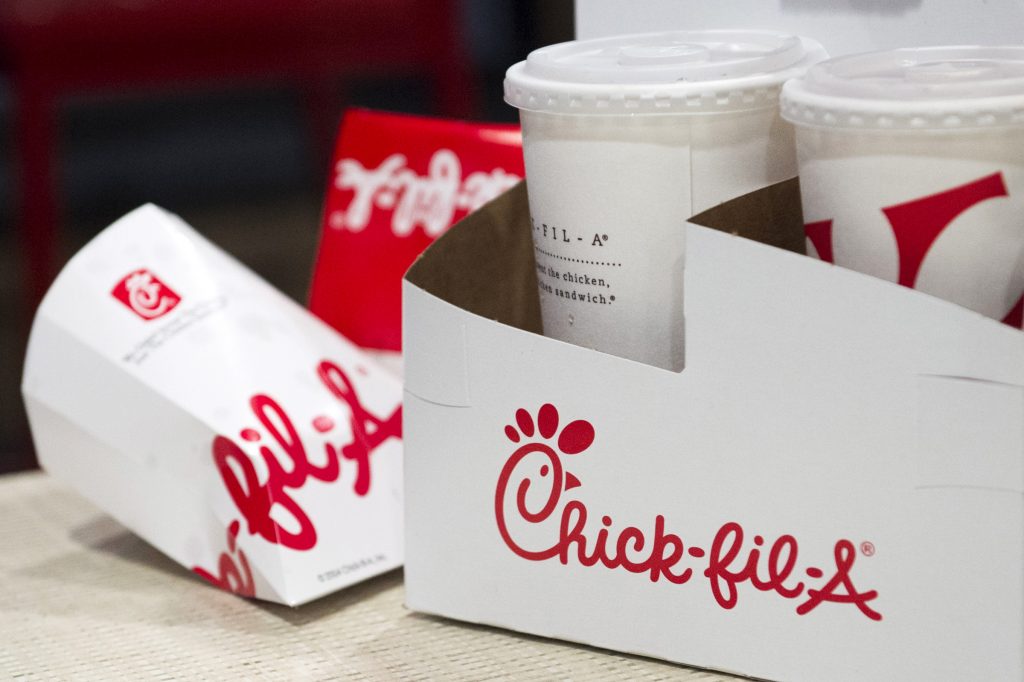 Drink and sandwich containers are seen on a customer’s table at a New York City Chick-fil-A restaurant Oct. 3, 2015. The archbishop of San Antonio has said to “let the marketplace decide,” following his city’s decision to ban a Chick-fil-A outlet at San Antonio’s airport over its stand on traditional marriage. (CNS photo/Rashid Umar, Reuters)