BONN, Germany (CNS) — She had become nearly forgotten. Little is known about the young woman who was killed for her Christian faith, presumably in the second century A.D. But now, a pandemic is shedding light on her: St. Corona. The German Catholic news agency KNA reports the church’s martyr records put the year of her death at A.D. 177. It is not certain where she lived. A Greek account put it in Syria, while a Latin one said it was Marseilles, France, and Sicily. What is proven is that she began to be honored starting in the sixth century in northern and central Italy. All the rest is the stuff of legend — propagated above all by monks in the Alpine region. “This has nothing to do with the real history of Corona, but instead with stories aimed at deepening the faith,” said Manfred Becker-Huberti, a German theologian known in the Rhineland as an expert on folklore and customs. The St. Corona legends are bloody. One account is that, as a 16-year-old, she was forced to watch her husband, St. Victor, being murdered because of his faith. She died in a gruesome manner: Her persecutors tied her between two palm trees that had been bent to the ground. Her body was then torn apart when the trees were set loose to snap back into standing position. She is above all revered in Germany’s southern state of Bavaria and in Austria, KNA reports. A chapel is dedicated to her in Sauerlach, near Munich. In the Bavarian Diocese of Passau, two churches recall her name, while in the province of Lower Austria and outside of Vienna there are two towns named “Sankt Corona.” In the cathedral of Munster in northwestern Germany, there is a St. Corona statue, currently decorated with flowers placed at its base. Some relics of the martyr were taken to the Prague cathedral in the 14th century.

VATICAN CITY (CNS) — With public gatherings, including Masses, banned in Italy to prevent the spread of the coronavirus, the Vatican published an updated version of Pope Francis’ schedule for Holy Week and Easter. In a March 27 statement, the Vatican said that all Holy Week celebrations will be celebrated at the Altar of the Chair in St. Peter’s Basilica “without the participation of the people.” The Vatican also said the release of the updated schedule takes into account the provisions made by the Congregation for Divine Worship and the Sacraments. Cardinal Robert Sarah, prefect of the congregation, said in a decree dated March 20 that because the chrism Mass is not formally part of the Triduum, a bishop can decide to postpone its celebration. For the first time, the pope’s schedule for Holy Week does not include the chrism Mass, which is usually celebrated the morning of Holy Thursday. During the liturgy, priests renew their promises and the oils used for the sacraments are blessed. This year also will be the first time Pope Francis will celebrate the evening Mass of the Lord’s Supper in the Vatican instead of at a prison, hospital or other institution. The Congregation for Divine Worship said that “the washing of feet, which is already optional, is to be omitted” when there are no faithful present.

NEW ORLEANS (CNS) — With the global spread of COVID-19 financially impacting the ministry of the U.S. Catholic Church, the bishop-led board of the annual 24-hour #iGiveCatholic online giving platform activated its national website March 26. It has begun accepting donations from individuals and businesses in support of parishes, schools and ministries of 39 dioceses across the country. Cory Howat, executive director of the Catholic Community Foundation of the Archdiocese of New Orleans, which launched the 24-hour online giving campaign in 2015, said the website — igivecatholic.org — would be activated indefinitely to address “the looming financial crisis to our parishes, dioceses and other Catholic institutions.” The campaign will be branded as #iGiveCatholicTogether. Howat said about 25 “mission” dioceses represented by Catholic Extension would benefit from the online funding, and he projected “another 25 dioceses would come aboard” once word of the expanded giving platform was disseminated more broadly. Catholic Extension is a Chicago-based mission organization that supports the nation’s mission dioceses.

WASHINGTON (CNS) — The website of the U.S. Conference of Catholic Bishops has created a special link on its website to a page offering various resources for the nation’s Catholics as they weather the ongoing coronavirus pandemic. Under the heading “Together in Christ: Responding to Coronavirus,” the usccb.org/coronavirus page also has a link to for all Catholics and other Christians to participate in Pope Francis’ special “urbi et orbi” (to the city and the world) blessing in response to the ongoing coronavirus pandemic. It takes place at 6 p.m. Rome time March 27. Among the many resources on the USCCB page are lists of websites for Mass being livestreamed by various outlets, such as Catholic TV and EWTN, and on various internet platforms; links to prayers for an end to COVID-19, including from the pope and Los Angeles Archbishop Jose H. Gomez, USCCB president; and daily reflections “to help us all during this trying time.” There are Eastern Catholic Church resources and several Catholic publishers have made their resources available. Lists on the page will be updated as more resources become available.

WEST PALM BEACH, Fla. (CNS) — A tightening of some hospital visitor restrictions on religious ministers and patient family members has begun as the coronavirus pandemic ramps up around the U.S. “It has been about two weeks — it started out with a limit on the times ministers or family members could come in, then a week later they completely stopped it,” said Maria Arvonio, a night-shift nursing supervisor for a large community hospital near Mount Laurel, New Jersey, and the lower Northeastern regional director of the Chicago-based National Association of Catholic Nurses. Catholic nurses, Arvonio noted, are now often the only spiritual connection for those in their care. “The patients can make phone calls, but eucharistic ministers, volunteers and family are not allowed to visit at this time, so Catholic nurses are the only Catholic lifeline to their spirituality,” Arvonio said, adding that historically the Church has encouraged strong collegial associations of Catholic nurses. The Joint Commission, an organization that accredits and certifies over 22,000 health care organizations in the U.S., likewise acknowledges that offering spiritual care to patients is vital toward supporting their health. “In my opinion, we are the hands and feet of Christ ministering God’s love and healing to our patients, especially now more than ever since patients are unable to receive the Eucharist and spiritual care” offered by extraordinary ministers of holy Communion, Arvonio said, adding the patient disconnect with family members can lead to anxiety and fear of the virus. 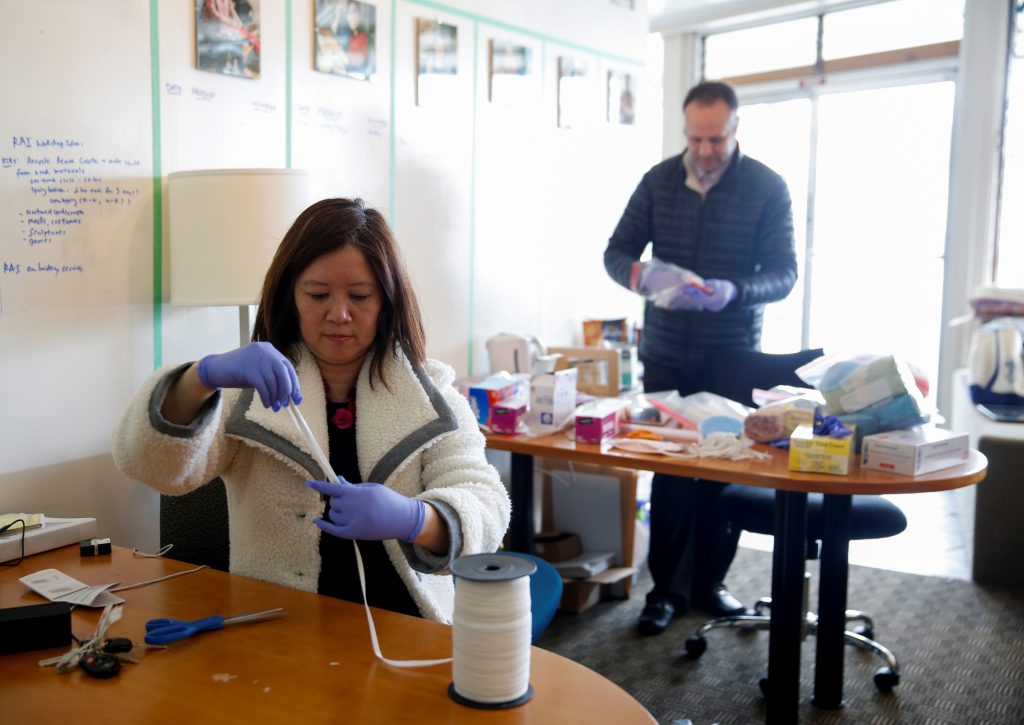