WASHINGTON (CNS) — Miami Archbishop Thomas G. Wenski was on Capitol Hill in early April with a delegation of four high-ranking Salvadoran prelates in tow, including the first cardinal in the country’s history. They spoke with U.S. lawmakers, as Archbishop Wenski emphatically put it, “with the same voice,” to convince politicians on both sides of the aisle to restore protections that would allow two groups of Salvadoran immigrants to continue to stay and work in the country legally. Since the time of the bloody civil war in El Salvador in the 1980s, bishops in the United States have sought counsel from the bishops in El Salvador about what to do and say on their behalf at the highest levels of power in Washington — from Congress to the president of the United States. During the April visit by the Salvadoran prelates, a group of Salvadoran parishioners and their U.S. supporters advocated for a different set of challenges: voicing their support for TPS and DACA recipients and supporting the voice of the bishops, who said a mass return of the beneficiaries of the immigration programs would pull the country into an even bigger crisis.

Don’t be ‘couch potatoes,’ get up and evangelize, pope says

VATICAN CITY (CNS) — Christians must be willing to move where the Spirit leads them and not be benchwarmers on the sidelines of efforts to evangelize, Pope Francis said. Evangelization “isn’t a well-thought-out plan of proselytism” but rather an occasion in which the Holy Spirit “tells you how you should go to bring the word of God, to carry Jesus’ name,” the pope said in his homily April 19 during morning Mass at the Domus Sanctae Marthae. “A ‘couch potato’ evangelization doesn’t exist. Get up and go! Be always on the move. Go to the place where you must speak the word (of God),” he said. The pope reflected on the day’s first reading from the Acts of the Apostles in which the apostle Philip, after being commanded by an angel, preaches the Gospel to an Ethiopian eunuch and baptizes him. Comparing the event to a wind that carries seedlings and plants them, Pope Francis said it was a beautiful account of how God works in evangelization.

VATICAN CITY (CNS) — Pope Francis asked the world’s Benedictines to continue to offer oases of peace and silence to a busy and distracted world. So many people today “do not have enough time to listen to God’s voice,” he told about 400 members of the Benedictine Confederation on April 19 at the Vatican. In this hectic world, Benedictine monasteries and abbeys “become like oases where men and women of all ages, origins, cultures and religions can discover the beauty of silence” and regain their bearings so they can be “in harmony with creation, letting God re-establish a proper order in their lives,” he said. St. Benedict, their order’s sixth-century founder, acted as a guiding light during an age that was marked by “a deep crisis of values and institutions,” Pope Francis said. “He knew how to discern between the essential and the secondary in spiritual life, firmly placing the Lord in the forefront. May you, too, his children in this time of ours, practice discernment to recognize what comes from the Holy Spirit and what comes from the spirit of the world or the spirit of the devil,” he said.

VATICAN CITY (CNS) — The Church needs courageous men and women like Italian Bishop Antonio Bello of Molfetta, who imitated Jesus’ closeness to the poor and the downtrodden, Pope Francis said. Visiting the birthplace of the beloved bishop affectionately known as “Don Tonino,” the pope said Bishop Bello’s life and ministry “remind us to not theorize closeness to the poor, but to be close to them as Jesus did. Don Tonino did not do this because it was convenient or because he was seeking approval, but because he was moved by the Lord’s example. Out of love for Him, we find the strength to rid ourselves of the garments that get in the way so that we can dress ourselves in service, to be ‘the church of the apron, which is the only priestly vestment recorded in the Gospel,’” he said April 20. Pope Francis arrived in the morning by helicopter in the town of Alessano, located in the southern Italian province of Lecce, where Bishop Bello was born and buried.

VATICAN CITY (CNS) — Pope Francis appointed three women as consultors to the Congregation for the Doctrine of the Faith. It marks the first time women and laypersons were named as active contributors — not support staff. The Vatican newspaper, L’Osservatore Romano, called the decision to appointment the women “historic.” The Vatican announced the appointments April 21. Linda Ghisoni, born in Italy in 1965, is one of two women Pope Francis named to be undersecretaries of the Dicastery for Laity, the Family and Life in 2017; Michelina Tenace, born in Italy in 1954, is a professor and head of the department of fundamental theology at Rome’s Pontifical Gregorian University; Laetitia Calmeyn, born in Belgium in 1975, is a consecrated virgin and teaches theology at the College des Bernardins in Paris. She is a nurse specializing in palliative care and received her doctorate from the John Paul II Pontifical Theological Institute.

VATICAN CITY (CNS) — The Italian government has granted citizenship to Alfie Evans, a seriously ill British toddler, in a last-minute effort to prevent doctors in England from withdrawing life-support. The Italian foreign ministry, in a brief note April 23, said Angelino Alfano, the foreign minister, and Marco Minniti, the interior minister, “granted Italian citizenship to little Alfie. The Italian government hopes that being an Italian citizen would allow the immediate transfer of the baby to Italy,” the foreign ministry said. The baby’s parents, Tom Evans and Kate James, lost their latest legal battle April 23 to prevent doctors from removing Alfie’s life support when the European Court of Human Rights refused to intervene. Doctors in the U.K. have not been able to make a definitive diagnosis of the 23-month-old child’s degenerative neurological condition, but they have said keeping him on life support would be “futile.” A high court judge backed a lower court’s ruling that the hospital can go against the wishes of the family and withdraw life support.

HONG KONG (CNS) — Catholics in China’s Henan province have been warned that venues will be closed if they do not adhere to the revised regulations on religious affairs. Ucanews.com reported that a clampdown on religious freedom has intensified in the province in recent months, with crosses removed from churches, minors banned from entering churches, Church-run kindergartens closed and children expelled from Mass. Now Henan Chinese Patriotic Catholic Association and Henan Catholic Administration Commission have jointly issued a circular, warning worshippers to take the new rules seriously. It warned people to follow “the principle of religion and education separation” and the revised regulations on religious affairs. It said no religious venue should hold training sessions and no children should be brought to church by parents. “It was only propaganda and education previously, but now there is a red line, a high-pressure line, so take it seriously,” the circular said. 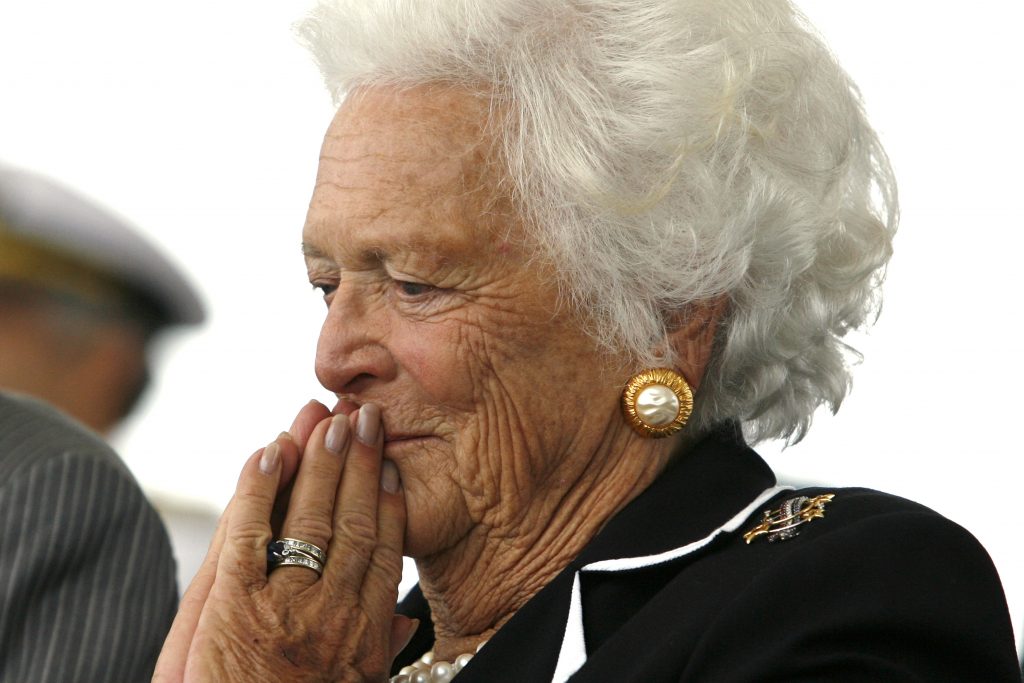 Former first lady Barbara Bush, the wife of one U.S. president and the mother of another, died April 17 at age 92 at her home in Houston. She is pictured in a 2006 photo. (CNS photo/Kevin Lamarque, Reuters)