After violent storms, states facing recovery while coping with pandemic

BIRMINGHAM, Ala. (CNS) — The Diocese of Birmingham “may have been spared greater disaster” because of Mary’s intercession when numerous tornadoes and widespread damaging winds ripped through Alabama and much of the South April 12 to April 13, said Bishop Robert J. Baker, apostolic administrator of the diocese. “Because the Diocese of Birmingham falls in the trajectory of what is referred to as ‘Dixie Tornado Alley,’ we have a special prayer that we promote when storms come our way,” Bishop Baker said in an April 15 statement. “As the storms came our way Easter Sunday evening, I went to Facebook and shared that prayer to Our Lady of Joyful Hope.” Bishop Baker said that while there was no loss of life in Alabama, serious damage was done to homes in northern Alabama, which is the area covered by the diocese. “Our Catholic Social Services offices in those areas will reach out to people in distress,” he added. The storms hit central Texas early April 12 with what was described as “gigantic” hail, leaving damage behind as the storms went east through Louisiana, Arkansas, Mississippi, Tennessee, Alabama, Georgia and the Carolinas. News reports said the severe weather left at least 33 dead and left over 1 million people without power early in the morning of April 13.

VATICAN CITY (CNS) — Retired Pope Benedict XVI “is well,” although the coronavirus pandemic restrictions mean he received no visitors April 16, his 93rd birthday. “Thank God, all of us in the Mater Ecclesiae Monastery are well,” Archbishop Georg Ganswein, the retired pope’s personal secretary, told Avvenire, the Italian Catholic newspaper. The retired pope, the archbishop and a group of consecrated women live in the former monastery in the Vatican Gardens. Usually for his birthday, Pope Benedict is joined by his older brother, Msgr. Georg Ratzinger, who turned 96 in January, but Archbishop Ganswein told Vatican News that, this year, the two spoke on the phone. Msgr. Ratzinger’s call was just one of many birthday calls the retired pope had received. Despite the lockdown, Archbishop Ganswein told Avvenire April 16, the day would be “more festive” than usual in the monastery. And, he told Vatican News, it would feature the singing of Bavarian folk songs. The day began, as usual, with Mass in the monastery chapel. The retired pope, the archbishop said, prays each day for the sick and for those suffering because of the COVID-19 pandemic.

WASHINGTON (CNS) — Some U.S. bishops joined an effort by national organizations and other groups in Latin America calling on global leaders to provide better protections for migrants and refugees during the coronavirus pandemic, while also voicing worries about the spread of the virus to other countries via deportations. One of the organizations that joined the statement, released by the Washington-based Faith in Action and the Hope Border Institute of El Paso, Texas, raised an alarm about Mexican authorities busing migrants to shelters near the Guatemala border and encouraging migrants to cross south into the country. “They’re not providing any medical care or taking precautions to protect against the spread of COVID-19. The situation is very chaotic and it’s exposing migrants and our staff to a great risk of contracting the virus,” said Ramon Marquez Vega, who directs La 72, a migrant shelter in southern Mexico near the Guatemala border. He made the comments in the statement provided by Faith in Action and the Hope Border Institute. Guatemalan authorities recently said the U.S. sent a plane of deportees to the country with the majority of them carrying the coronavirus, which causes COVID-19. The April 15 statement backed by El Paso Bishop Mark J. Seitz, along with Cardinal Joseph W. Tobin of Newark, New Jersey, and Cardinal Alvaro Ramazzini of Huehuetenango, Guatemala, called for an immediate release “of as many migrants and asylum-seekers from detention as possible.”

WASHINGTON (CNS) — U.S.-based aid groups are devoting extra resources to refugees and migrant people globally who are vulnerable to the new coronavirus. Efforts by Catholic Relief Services, Malteser International, Jesuit Refugee Service and AVSI-USA are focusing on basic education about the virus, sanitation and hygiene and boosting staff capacity to ensure an effective response to COVID-19, the illness caused by the virus. The message being shared is the same as that in the developed world: maintain social distancing, wash hands, and cover sneezes and coughs. The lack of clean water and soap in many poor communities has made the work more difficult to carry out, however, agency officials said. At the same time, Aid to the Church in Need announced it will provide $5.5 million in emergency funding to priests and nuns who care for the most vulnerable communities around the world but who have lost their own basic means of subsistence because of the pandemic. Sean Callahan, CEO and president of CRS, said in a statement the agency, which is the U.S. bishops’ overseas relief and development agency, is utilizing its relationships with partners around the world to respond as quickly as possible to the pandemic. Particular emphasis is being placed on addressing the needs of older adults and vulnerable children, refugees and migrants, people with compromised immune systems and their caregivers, as well as other high-risk groups. “Our COVID-19 response will draw upon our experience in acute health emergencies,” Callahan said, citing his agency’s work to respond to the Ebola outbreak in West Africa and the HIV crisis. “Our work will be informed by the local context and focus on some of the most vulnerable communities.

Pope pens editorial on joy in the time of
coronavirus

VATICAN CITY (CNS) — Like the women at the tomb whose sorrow turned to joy after the Resurrection, Christians also are called to be joyful witnesses to Christ’s victory over death amid the coronavirus pandemic, Pope Francis said. In an editorial published April 17 by the Spanish magazine, Vida Nueva, the pope said that those who take part in “the Lord’s passion, the passion of our brothers and sisters, even living our own passion, our ears will hear the newness of the Resurrection: we are not alone, the Lord precedes us on our journey by removing the stones that paralyze us.” “If there’s one thing we’ve been able to learn in all this time, it’s that no one is saved alone,” he wrote. “Borders are falling, walls are crumbling and all fundamentalist discourses are dissolving before an almost imperceptible presence that shows the fragility of which we are made.” In his editorial, titled “Un plan para resucitar” (“A plan to resurrect”), the pope also acknowledged that an invitation to be joyful “may seem like a provocation or a bad joke in front of the grave consequences we are suffering due to COVID-19. Like the first women disciples who went to the tomb, we live surrounded by an atmosphere of sorrow and uncertainty that makes us ask, ‘Who will roll back the stone from the entrance to the tomb for us?’ How will we deal with this situation that has completely overtaken us?” he asked.

NEW YORK (CNS) — The Christopher Awards, generally presented each spring, are being delayed until October. The Christophers, though, did announce April 15 the winners in the book category of the awards, which recognize outstanding storytelling that lifts the spirit and shows how every individual has worth and can make a difference. “Each of these special books can provide a welcome break from today’s troubling headlines while transporting you to a different place or time, to see the world from another perspective that can offer insight, hope and solace,” said an April 15 statement by Tony Rossi, director of communications for The Christophers, founded in 1945 by Maryknoll Father James Keller. Five books for adults and six books for children in varying age groups were chosen as winners. Among the winning books for adults is “Grace Will Lead Us Home,” by Pulitzer Prize-winning journalist Jennifer Berry Hawes, which explores the difficult road to healing and forgiveness by family members and the community at large after the racist murders of nine members at Emanuel AME Church in Charleston, South Carolina. Among winners of children’s books is “Gittel’s Journey” (Age 6 and up) by Leslea Newman, illustrated by Amy June Bates, shows the promise of liberty for a Jewish mother and daughter fleeing persecution in their homeland in the early 20th century. The Christophers website is www.christophers.org. 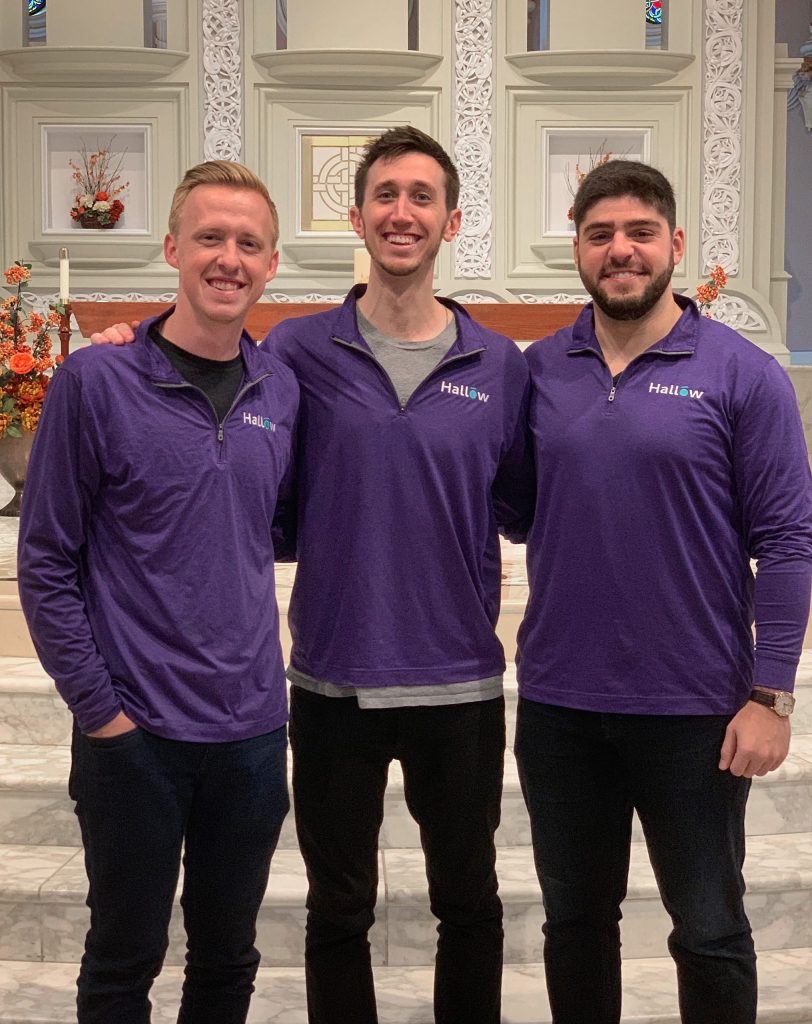 Alex Jones, Erich Kerekes and Alessandro DiSanto of Chicago pose for a photo April 3, 2020. They are the founders of a popular Catholic app called Hallow centered on meditation and prayer. They recently added special features to help people cope during the coronavirus pandemic. (CNS photo/handout via Archdiocese of Chicago)