DUBLIN (CNS) — The head of the Irish bishops’ conference said the government’s move to criminalize attendance at Mass as part of COVID-19 regulations was a “potential infringement of religious freedom and of constitutional rights. The precise provisions are unclear and at first reading appear to be draconian, going further than the restrictions we have been cooperating with throughout the pandemic to date,” said Archbishop Eamon Martin of Armagh, Northern Ireland. “We shall be seeking legal counsel to advise on several questions concerning the extent of the statutory instrument.” He also said the bishops were seeking “an immediate meeting” with the government “and we request the suspension of this harsh and unclear statutory instrument.” Churches in the Irish Republic have been closed for public worship since Dec. 26, but the government has claimed that this was just a matter of regulation rather than law. However, on April 16, Health Minister Stephen Donnelly signed a new law — known as a statutory instrument — making it a criminal offense. “We consider the publication of this statutory instrument, together with associated penal provisions, to be provocative and formally enacting a potential infringement of religious freedom and of constitutional rights,” Archbishop Martin said.

KNOXVILLE, Tenn. (CNS) — Bishop Richard F. Stika of Knoxville offered prayers for a teenager who was killed and an injured police officer involved in a school shooting. The bishop also expressed concern in a statement April 12 following the incident for “the series of tragic events” that have resulted in the deaths of four other teens since Jan. 27 who were former or current students at the Knoxville public school as well as concern for mass shootings in several cities nationwide in recent weeks. Such incidents, he said, “demonstrate that violence in our society remains a serious, almost daily occurrence and that it claims victims in many different ways. As a nation, we must commit ourselves to work to turn away from violence and find real solutions that lead us to love, compassion and decency,” Bishop Stika said in a statement released following the death of an Austin-East Magnet High School student. Bishop Stika also pledged to “do what I can to help. Prayers are important, but communities must come together to find positive solutions to this ongoing problem in our country,” he said. Knoxville Police Officer Adam Willson, who was serving as a school resource officer at the school, was recovering from surgery after being shot, officials reported April 13.

St. Teresa of Avila’s life of prayer made her ‘exceptional,’ pope says

VATICAN CITY (CNS) — While St. Teresa of Avila was outstanding in many ways, her union with Christ through prayer made her an “exceptional woman,” Pope Francis said. In a video message April 15 marking the 50th anniversary of the proclamation of St. Teresa of Avila as a doctor of the church, the pope said the Spanish saint’s “audacity, creativity and excellence as a reformer are the fruit of the interior presence of the Lord. We are dealing with a person who was outstanding in many ways,” he said. “However, it should not be forgotten that her recognized relevance in these dimensions is nothing more than the consequence of what was important to her: her encounter with the Lord, her ‘determined determination,’ as she says, to persevere in union with him through prayer.” The pope’s video message was played during a conference titled “Exceptional Woman,” held at the Catholic University of St. Teresa of Avila in Spain. In his message, the pope said holiness is not a virtue reserved to “specialists of the divine” but is the “vocation of all believers.” Saints, like St. Teresa, “stimulate and motivate us, but they are not for us to literally try to copy them,” he said. “Holiness cannot be copied because even that could lead us away from the unique and different path that the Lord has for each one of us.”

ST. PAUL, Minn. (CNS) — After a night of protests and vandalism April 11 in Brooklyn Center, Minnesota, following the police shooting of Daunte Wright, Archbishop Bernard A. Hebda of St. Paul and Minneapolis urged prayers for justice and peace. “I hope that as a community, we might be able to pause and pray, particularly during this time of already heightened tension due to the Chauvin trial,” the archbishop said in an April 12 statement referring to the current trial in Minneapolis of former Police Officer Derek Chauvin over the May 25, 2020, death of George Floyd while he was in police custody. “I am encouraged and inspired by the pleas for peace that have continued to come from the family of George Floyd” over the Wright shooting, he added. At a news conference April 12, Brooklyn Center Police Chief Tim Gannon, who later resigned, said it appeared from police body camera video the officer accidentally fired her gun while intending to use her Taser. The officer was later identified as Kim Potter, a 26-year veteran of the Brooklyn Center Police Department. Wright, a 20-year-old Black man, was hit by a single bullet after officers stopped him for a traffic violation because the car he was driving had expired registration tags but officers then discovered that he had an outstanding warrant. According to news reports, a struggle ensued as an officer on the driver side of the vehicle began to handcuff Wright, who jumped back into the driver’s seat and was shot. The local medical examiner said Wright “died of a gunshot wound of the chest.”

WASHINGTON (CNS) — The decision by the U.S. Food and Drug Administration’s acting commissioner to suspend enforcement of the agency’s in-person prescribing requirement for the abortion drug endangers women’s health and possibly their lives, pro-life leaders said. On April 12, Dr. Janet Woodcock said the FDA will “exercise enforcement discretion” regarding its own requirement for mifepristone as long as President Joe Biden’s declaration of a public health emergency for COVID-19 remains in place. The brand name for mifepristone is Mifeprex. Also called RU-486, it is used to end pregnancies during the first 10 weeks. Archbishop Joseph F. Naumann of Kansas City, Kansas, chairman of the U.S. bishops’ Committee on Pro-Life Activities, said April 16 it was difficult to see the FDA’s decision “as anything other than callous capitulation to the requests of abortion activists without regard for the health and safety of the women involved. With this decision, not only are women being sold the lie that abortion will solve their problems, but also that chemical abortion is a safe and easy way to go about it,” he said in a statement. Women and their unborn children “deserves so much more,” he added.

Apostolic nuncio to Mexican bishops: ‘Look reality in the eye’

MEXICO CITY (CNS) — The apostolic nuncio to Mexico urged the country’s bishops to “look reality in the eye” as the country’s non-Catholic population increases and Mexicans increasingly identify as nonreligious. Speaking April 12 at the opening of the Mexican bishops’ conference biannual gathering, Archbishop Franco Coppola also told the virtual audience to rethink their pastoral approaches as fewer people participate in parish life and don’t get married in the Church. “The decline in the Catholic population in this land of Guadalupe is extremely worrying,” Archbishop Coppola said. “We’re seeing now with ever more clarity just how much in recent decades the formation of the faith has not been able — as we thought or would have wanted — to permeate those who are baptized. We have to recognize that, if the Gospel and our Lord Jesus Christ will always continue to be attractive, it’s evident our ‘traditional’ methods today don’t work, nor can they work in any of the areas of evangelization.” Mexico’s most recent census, in 2020, showed the Catholic population declining by 5 percentage points to 77.7% of the population. Observers see the decline as part of a trend of people falling away from the Church throughout Latin America, although in some northern and western states such as Zacatecas and Guanajuato, more than 90% of the population still professes Catholicism. That figure falls to just 54% in the largely Indigenous state of Chiapas, where evangelical congregations have gained ground.

CINCINNATI (CNS) — A federal appeals court April 13 upheld a 2017 Ohio law that prohibits doctors from knowingly participating performing an abortion because of a prenatal diagnosis of Down syndrome. In a 9-7 decision, the U.S. Court of Appeals for the 6th Circuit, based in Cincinnati, overturned an injunction against the state’s Down Syndrome Non-Discrimination Act, saying ruled the law “does not create a substantial obstacle to a woman’s ability to choose or obtain an abortion,” as its opponents contend. Ohio “has legitimate interests in enacting such a law,” it said. The 6th Circuit said these interests are threefold: “protecting the Down syndrome community from the stigma it suffers from the practice of Down syndrome-selective abortions; protecting women whose fetuses have Down syndrome from coercion by doctors who espouse and advocate the abortion of all such fetuses; and protecting the integrity and ethics of the medical profession by preventing doctors from enabling such targeted abortions.” It noted the lower court found “a likelihood that is an impermissible infringement on women’s ‘unfettered right to choose whether to terminate, or continue, a pregnancy previability’ and therefore enjoined the defendants from implementing or enforcing” the law, also known as H.B. 214. 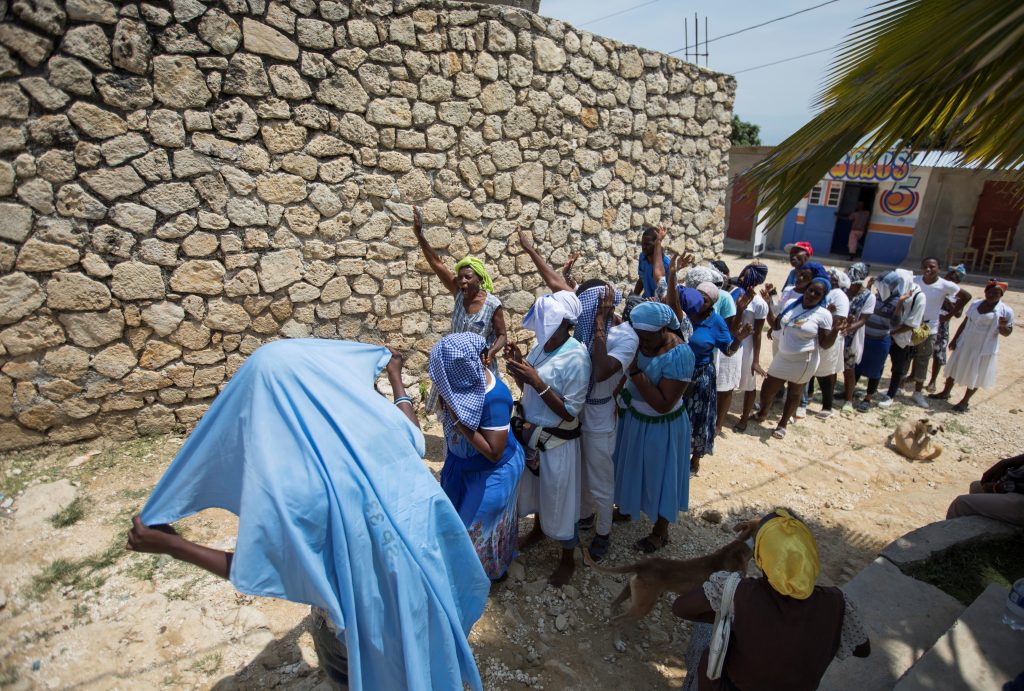 People pray near the Church of St. Roch in Port-au-Prince, Haiti, April 12, 2021. A French priest, two nuns and three laypeople who were abducted together on their way to the parish April 11. (CNS photo/Valerie Baeriswyl, Reuters)