Ukrainian Marine to pope: Mariupol ‘what hell on earth looks like’

VATICAN CITY (CNS) – A Ukrainian Marine commander pleaded with Pope Francis to do everything to save the city of Mariupol, which is close to being captured by Russian forces. “I am turning to you for help because the time has come when prayers are not enough,” Maj. Serhiy Volyna, commander of the 36th Separate Marine Brigade, wrote in a letter published on April 18 by the Ukrainian online newspaper Pravda. The commander’s letter to the pope was also shared on Twitter by Andrii Yurash, Ukraine’s ambassador to the Holy See. Russian forces have focused their attacks on eastern Ukraine, particularly Mariupol. If captured, the port city would connect the Donbas region with Crimea, which was annexed by Russia in 2014. In his letter, Volyna said he had not read about the pope’s appeals to the world on Ukraine’s behalf because he had “been fighting for more than 50 days, completely surrounded, and all I have time for is a fierce battle for every meter of this city that is surrounded by the enemy.”

Praying for victims, police, bishop says shooting shook all ‘to our core’

BROOKLYN, N.Y. (CNS) – In his homily at the evening chrism Mass on April 12, Brooklyn Bishop Robert J. Brennan spoke of the subway shooting that occurred early in the day, saying: “We were shaken to our core this morning, right here in the borough of Brooklyn, when violence hit us at home. Tonight, we pray very earnestly for those who were injured, passengers on the train and the police who went in. We pray for their healing and restoration of their health. We pray for all of those out there every day watching over, protecting us, in so many ways,” he said, echoing a statement he issued shortly after reports that a shooting spree took place at the Sunset Park subway station. Reuters, CNN and other news outlets reported that during the morning rush hour, a man wearing a gas mask released a canister of smoke and opened fire into the crowd on a train and on the station platform at a subway stop in the Brooklyn borough of New York. A massive manhunt began immediately for the suspected shooter, later identified as Frank R. James, 62, and initially described as a person of interest. Later police said he was the only suspect. He was arrested on April 13 in the early afternoon, according to a tweet posted shortly before 2 p.m. EDT by WNBC-TV reporter Myles Miller. At least 23 people were injured. Ten of them were hit by gunfire; most were treated and released from the hospital.

NASHVILLE, Tenn. (CNS) – Leaders of the Knights of Columbus see the Catholic men’s fraternal organization as a powerful engine for evangelization, and to start that engine, they are developing a program to train members on how to evangelize. “We think it’s desperately needed in the church,” said Damien O’Connor, Vice President of Evangelization and Faith Formation for the Knights’ Supreme Council, which has its headquarters in New Haven, Connecticut. “We’re all called to evangelize,” but few Catholics are comfortable with that mission, O’Connor told the Tennessee Register, newspaper of the Diocese of Nashville. “We take it for granted that everybody knows how to share the faith.” So the Knights are developing a prototype of a training program – the Sons of McGivney Evangelization and Discipleship Training – that was unveiled during a weekend training retreat from March 17-20 at the Catholic Pastoral Center in Nashville. “McGivney” in the title refers to Blessed Michael McGivney, who founded the Knights of Columbus in 1882. About 30 Knights from across Tennessee and 10 members of the staff at the Supreme Council participated in the training retreat, led by Sean Pott, Director of Evangelization and Education for the Knights.

Bishop says diocese is present for Haitians forgotten by
government

JÉRÉMIE, Haiti (CNS) – The third bishop of Haiti’s Jérémie Diocese must be the only Catholic bishop in the world whose cathedral roof has collapsed twice in earthquakes and was ripped off once by a Category 4 hurricane. “We are alive,” Bishop Joseph Gontrand Decoste told the Jérémie radio station JCOM in an April 14 video interview. “Depi tet ou pa koupe gen espwa mete chapo,” the 64-year-old bishop said with a smile, peppering the interview with Creole proverbs. “As long as your head’s still on your shoulders, you can hope to put a hat on it.” Many locals will be preparing their finest hats for the mid-April diocesan golden jubilee, which also honors Bishop Carl-Édouard Peters, the first bishop, whose heart failed in 1975 as he cheered on Jérémie’s winning soccer team. The St. Louis Cathedral, whose roof collapsed for a third time in the August 2021 earthquake, has been temporarily patched up for the occasion. “We cannot fail to celebrate,” said Bishop Decoste, as he waits for a recommendation by engineers engaged by PROCHE, Partnership for the Reconstruction of the Church in Haiti. The 1901 cathedral, considered a national heritage, has always been an emblem of the remote coastal outpost of Jérémie. At one time, the city was connected to the rest of the country only by boat or a rocky, mountainous winding dirt track prone to flooding. A new road connecting Jérémie to Les Cayes, 60 miles to the southeast, was completed in 2015. Today, the region is cut off from capital city, Port-au-Prince, by armed gangs who control Martissant, a poor suburb on the only road leading to Haiti’s southwestern peninsula.

SAN SALVADOR, El Salvador (CNS) – The statue of Jesus, blindfolded and cuffed, ubiquitous during Holy Week processions here, hit close to home for Gabriela Rivas. Like many women in El Salvador, Rivas spent Holy Week looking for help for her husband, detained without cause by government authorities on April 10, Palm Sunday, she said. “We don’t know what condition he’s in, we have access to nothing, there’s no communication, no visits,” and no way to get him out, said Rivas, a Catholic mother of two, in an April 15 interview with Catholic News Service. Rivas’ husband is one of more than 12,000 Salvadorans the government has detained since March 27, the day legislators approved an emergency law that made detentions in the Central American country easier. Government authorities said the move was necessary to battle gang violence following a weekend that set a record number of homicides in late March. “More than 12,000 terrorists captured in just 21 days,” Salvadoran President Nayib Bukele tweeted on April 15. But Rivas said her husband was not a terrorist or a gang member. He was a bus driver trying to provide for his family when the government unjustly detained him using the emergency law. The measure suspends for 30 days constitutional freedoms, such as the right to assemble, due process and privacy in communications, and it threatens to detain suspected gang “collaborators.”

MANILA, Philippines (CNS) – Tropical Storm Megi continues to inflict damage in the Visayas and Mindanao regions of the Philippines after making landfall on April 10. By April 14, the death toll surpassed 120, with dozens remaining missing. Landslides and street flooding forced 140,000 people to seek refuge at evacuation sites in Northern Mindanao and Eastern Samar provinces, reported ucanews.com. On April 13, the Vatican sent a telegram expressing Pope Francis’ condolences as well his prayers for the dead, injured, displaced, and emergency personnel involved in recovery efforts. The Philippine army has joined the rescue efforts but is facing difficulties in the movement of its personnel, reported ucanews.com. “We are racing against time to rescue those who are hit by landslides but cannot advance in some areas because the ground is still moving … it is dangerous,” Col. Noel Vestuir told the media on April 12. “Our rescue teams are having difficulty in locating missing persons due to the mud deposits in flooded areas. We need to act fast, as many could die due to suffocation,” Gary Escaler, a member of a rescue team, told ucanews.com. 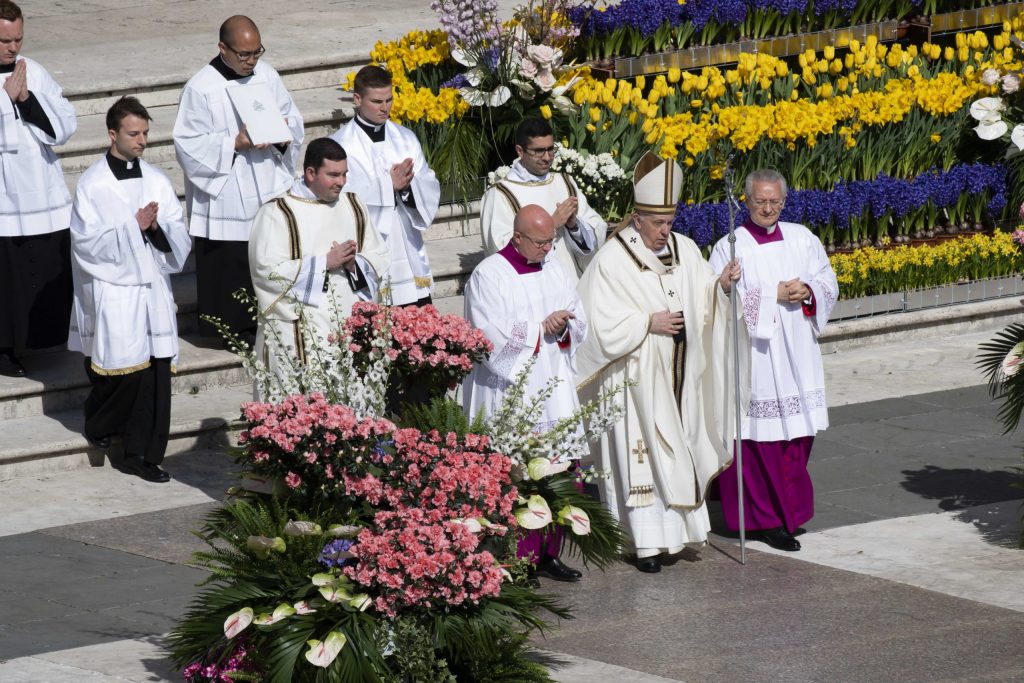