VATICAN CITY (CNS) — In a letter to the bishops of Chile, Pope Francis apologized for underestimating the seriousness of the sexual abuse crisis in the country following a recent investigation into allegations concerning Bishop Juan Barros of Osorno. The pope said he made “serious mistakes in the assessment and perception of the situation, especially due to a lack of truthful and balanced information. I ask forgiveness of all those I have offended and I hope to be able to do it personally in the coming weeks,” the pope said in the letter, which was released by the Vatican April 11. Several survivors apparently have been invited to the Vatican to meet the pope. Abuse victims alleged that Bishop Barros — then a priest — had witnessed their abuse by his mentor, Father Fernando Karadima. In 2011, Father Karadima was sentenced to a life of prayer and penance by the Vatican after he was found guilty of sexually abusing boys. Father Karadima denied the charges; he was not prosecuted civilly because the statute of limitations had run out. Protesters and victims said Bishop Barros is guilty of protecting Father Karadima and was physically present while some of the abuse was going on. During his visit to Chile in January, Pope Francis asked forgiveness for the sexual abuses committed by some priests in Chile. “I feel bound to express my pain and shame at the irreparable damage caused to children by some of the ministers of the Church,” he said.

NEW HAVEN, Conn. (CNS) — A nine-part online video series from the Knights of Columbus is featuring members who are making a difference in their communities. The “Everyday Heroes” series debuted April 3 and new videos were to appear on a special Knights’ website each Tuesday through May 29. They can be viewed at kofceverydayheroes.org. “This film series offers a glimpse into the many ‘ordinary’ ways in which the Knights serve those around them,” Carl Anderson, Knights of Columbus CEO, said in a statement. “’Everyday Heroes’ are your brothers, friends and co-workers who quietly serve, often over many years.” Joe Reali, a young Knight who was devoted to the Catholic Church as much as he was to football, is featured in the first video. When a family member became ill, he gave up football to care for her, but he died suddenly of an enlarged heart in 2015. The video features friends and family discussing Joe’s inspiring life and the establishment of a new Knights of Columbus council named in his honor in Woodbury, New York.

ARU, Congo (CNS) — A Catholic priest was shot dead in Congo shortly after celebrating Mass. U.N. radio in Congo reported April 9 that Father Etienne Nsengiunva, a priest in Kitchanga, was shot at point-blank range April 8. Father Emmanuel Kapitula, vicar of the parish in Kitchanga, said an armed man entered the room where Father Nsengiunva was eating with parishioners. “An armed man entered his house, pointed a gun at him and shot several times, killing him instantly. Those who were sharing the meal … could not believe it,” said Father Kapitula. Father Kapitula has asked the government to protect the people. “We demand that investigations be done, that culprits be punished,” he added. The murder occurred three days after Father Celestin Ngango of St. Paul Karambi Parish, abducted on Easter, was found, unharmed, by villagers.

WASHINGTON (CNS) — When a house is on fire, you don’t lock the doors to the outside to help save the people trapped inside, but that’s what U.S. policy is doing when it brings to an end two immigration programs that have helped more than 200,000 Salvadorans live, study and work in the U.S., said a U.S. archbishop April 13. Miami Archbishop Thomas G. Wenski made the comments as as he joined Salvadoran bishops in Washington on a panel about the roots causes of poverty, violence and migration. Archbishop Wenski accompanied Archbishop Jose Luis Escobar Alas of San Salvador, Cardinal Gregorio Rosa Chavez and two other Salvadoran bishops on the last day of a historic visit by the prelates to plead with U.S. lawmakers to protect through legislation Salvadorans who benefit from Temporary Protected Status and the Deferred Action for Childhood Arrivals programs. Returning the combined 215,000 Salvadorans who benefit from those programs to the country’s unrelenting violence and economic instability would mean devastating the nation further, breaking up families in the process and taking away the only income some families have, they said. TPS and DACA provide work permits and other protections to immigrants who meet certain criteria. The Trump administration announced these programs were ending. The future of DACA is temporarily tied up in the courts and also is pending action from Congress, which has expressed willingness to provide protection for the beneficiaries in some form. TPS recipients from El Salvador, however, have been told to get their affairs in order by the time the program expires in September 2019. “We’re here this week to support the Church in El Salvador because we speak with one voice and because the end of TPS represents a real crisis, not only for those who are here … but also for the people in El Salvador,” said Archbishop Wenski. “The end of TPS presents a real crisis.

VATICAN CITY (CNS) — The Gospel requires Christians to “denounce personal and social sins committed against God and neighbor in the name of the god money and of power for its own sake,” Pope Francis wrote. Finance and the economy effect every person and every society, playing a large part in “determining the quality of life and even death” and the degree to which a person’s life is worthy of his or her God-given dignity, the pope said in the introduction to the book “Potere e Denaro” (“Power and Money”). The book was released April 12. Written by Michele Zanzucchi, editor of Citta Nuova, the magazine of the Focolare Movement, the volume examines what Pope Francis has said and written about the economy and business, social justice, poverty and care for creation. In line with his predecessors and with the social teaching of the Catholic Church, Pope Francis wrote in the introduction, he knows that the Gospel message applies to social and economic questions as well as to questions of personal spirituality and Church life because “God does not abandon his creatures to the clutches of evil.”

VATICAN CITY (CNS) — Christian freedom is being free from worldly ambition, fashion and passion and being open to God’s will, Pope Francis said. The world today “is a bit schizoid, schizophrenic, right? It shouts, ‘Freedom, freedom, freedom!’ but it is more slave, slave, slave,” he said in his homily April 13 at morning Mass in the Domus Sanctae Marthae. People need to think about what kind of freedom they seek in the world, he said. Is it Christian, he asked, or “am I slave to my passions, my ambitions, to many things, to wealth, to fashion. It seems like a joke, but so many people are slaves to fashion!” 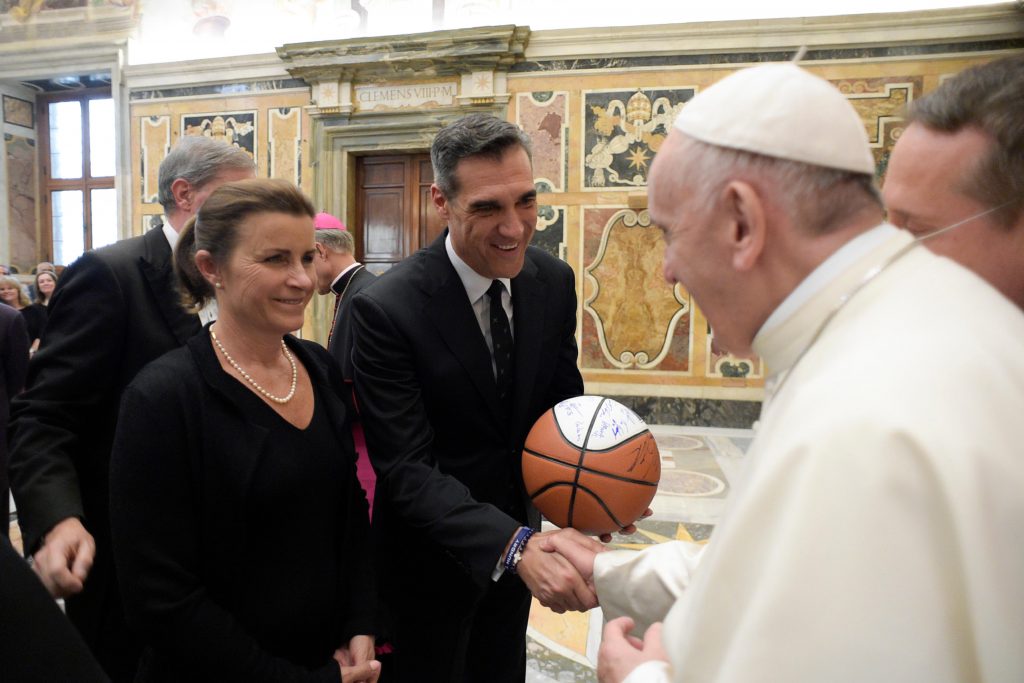