VATICAN CITY (CNS) – Russia’s war on Ukraine frighteningly raises the possibility of the use of nuclear weapons, the unleashing of radioactive material from nuclear power plants and a new push to develop or acquire nuclear weapons, including by terrorists, said members of the Pontifical Academy of Sciences. The international community has an obligation “to take all practical measures that reduce the possibility of nuclear war by accident, miscalculation or irrational action,” said a statement released on April 8 after an international conference on the risk of nuclear war. Russian President Vladimir Putin’s veiled threats to use nuclear weapons, his order to put Russia’s nuclear forces on high alert and the lack of care his troops took when they controlled the former Chernobyl nuclear power plant raise alarms that must be taken seriously, said members of the council of the pontifical academy. They warned about: the “intentional or unintentional destruction of nuclear power plants with grave consequences for large populations”; the “uncontrolled leakage of nuclear waste that can be used for so-called dirty bombs”; the potential use of so-called tactical nuclear weapons in battlefields, for instance in the Ukraine”; keeping nuclear weapons on high alert, potentially increasing the likelihood of a nuclear weapons launch accidentally or as a result of cyber manipulation”; and the use of powerful nuclear weapons and other weapons internationally beyond Ukraine when war further escalates.”

WASHINGTON, D.C. (CNS) – Two members of a group called Progressive Anti-Abortion Uprising said on April 5 that five fetuses taken by the police a week earlier from the Capitol Hill residence of one of the activists were “proof of illegal abortions” being performed at a Washington, D.C. abortion clinic. Activists Lauren Handy, 28, and Terrisa Bukovinac, 41, made the comments at a news conference, where they were joined by Randall Terry, founder of Operation Rescue. The same day, a group of 23 congressional Republicans wrote a letter to Mayor Muriel Bowser and Police Chief Robert J. Contee III asking for a thorough investigation of the remains “of five preborn children” and urging they not assume – “without conducting any medical evaluations” – that “each child died as the result of a legal abortion.” Handy and Bukovinac said the fetuses are from a box of medical waste they got from the driver of a medical waste truck at an abortion clinic, and they claimed the fetuses looked like they were from late-stage abortions. The box also contained more than 100 fetuses that appeared to be from early stage abortions, they said. According to a Washington Post story and other news accounts, the two women described walking up to a Curtis Bay Medical Waste Services truck outside the Washington Surgi-Clinic, one of a few U.S. abortion clinics that does late-term abortions. They said they asked the driver if he had picked up anything from the clinic. The driver told them yes, they said, so they asked for a box. “The driver asked what they would do with the remains inside,” The Washington Post reported. “After they told him they would give the (fetal) remains a funeral and bury them … the driver gave them a box.”

Bishop in Tigray sends out an SOS for his people

NAIROBI, Kenya (CNS) – Bishop Tesfaselassie Medhin of Adigrat, Ethiopia, has sent out an SOS call for swift humanitarian aid in Tigray to save millions of people facing death due to a “merciless man-made famine” in the war-torn region. While condemning the war atrocities, the bishop acknowledged individuals, institutions, governments and partners working tirelessly to bring hope to the region’s people. He warned of mass deaths unless relief aid urgently reached the area soon. “This is a dire call once again for a swift action by all concerned and competent international communities to save the lives of the millions of people at the verge of death from a merciless man-made famine in Tigray,” he said. “The current pace to deliver the promises (of aid) on the ground is not bringing any meaningful change on the lives of the people … who have been under siege of (and) total blockade for more than 500 days from all basic services and rights,” Bishop Medhin said in a statement on April 6. “In this critical moment, we desperately call upon the international community to take a quick action to save millions of people in Tigray from perishing, before it reaches (an) irreversible level,” he said.

Nigerian bishops: Government must do more to stop terrorist attacks

LAGOS, Nigeria (CNS) – The Nigerian bishops said lack of arrests in widespread attacks gives credibility to the idea that the government is either complacent or compromised. “Nigerians are sick of flimsy excuses and bogus promises from the government to deal with terrorists,” wrote Archbishop Lucius Iwejuru Ugorji of Owerri, newly elected president of the Nigerian bishops’ conference, on behalf of the bishops. “Considering the billions of naira appropriated for security and the fight against terrorism in recent times, it is difficult to imagine that a large number of terrorists, who unleashed terror on unarmed and law-abiding citizens, can disappear in broad daylight without a trace. It is indeed very hard to believe that our security apparatus lacks intelligence or the ability to fight and defeat terrorists in our nation,” the archbishop said. His April 4 statement came as the country was still dealing with a March 28 attack on a commuter train. Gunmen detonated a bomb on the tracks and opened fire on the train; when Archbishop Ugorji issued his statement, more than 150 people were still missing.

Vatican looking at implications of possible papal visit to Kyiv

VATICAN CITY (CNS) – Cardinal Pietro Parolin, the Vatican secretary of state, said it appeared Ukraine could keep Pope Francis safe if he made a wartime trip to Kyiv, but the pope’s safety was not the Vatican’s only concern. During his trip to Malta from April 2-3, Pope Francis had told reporters that a proposal for him to visit Kyiv was “on the table.” “A trip is not impossible; it can be done. It’s a matter of seeing what consequences this trip would have and assessing whether it would really contribute to ending the war,” Cardinal Parolin told reporters on April 7. However, “the pope would not go to take a position either in favor of one side or the other,” maintaining his practice of condemning the horrors of the war without specifically denouncing Russia, Cardinal Parolin said, according to Vatican News. And, he said, the Vatican’s “delicate” relationship with the Moscow Patriarchate of the Russian Orthodox Church, which supports Russia’s invasion of Ukraine, “also will have to be taken into account in the overall consideration of the possibility of making the trip or not.” The Ukrainian government has “given ample assurances that there would be no danger” to the pope in visiting Kyiv, Cardinal Parolin said, pointing out that “other leaders have made and are still making” such visits. The prime ministers of Poland, the Czech Republic and Slovenia visited in mid-March and Roberta Metsola, president of the European Parliament, went on April 1.

DENVER, CO (CNS) – A day after Colorado’s Democratic Gov. Jared Polis signed into law one of the nation’s most permissive abortion measures, a state away, the Republican-led Oklahoma House passed a near-total ban on abortion on April 5. The new Colorado law permits abortion up to the moment of birth. Oklahoma’s Life at Conception Act allows exceptions in cases where the pregnant woman’s life is endangered. According to the Kaiser Family Foundation, Colorado already was one of the most permissive states when it comes to a woman’s access to abortion. It joins 15 other states and the District of Columbia that have codified abortion into law in anticipation of the Supreme Court’s decision in a Mississippi case. In June or early July, the court will issue a ruling in Dobbs v. Jackson Women’s Health Organization, which involves Mississippi’s law banning most abortions after 15 weeks. It is expected the court will uphold the law and in doing so overturn Roe, returning the abortion issue to the states. The Oklahoma measure passed the state Senate last year and now it goes to Republican Gov. Kevin Stitt, who has vowed to sign all pro-life measures into law. It would make performing an abortion a felony, punishable by up to 10 years in prison or fines of up to $100,000. Several other states have put abortion restrictions in place, including Idaho, Florida, Georgia and Kentucky. 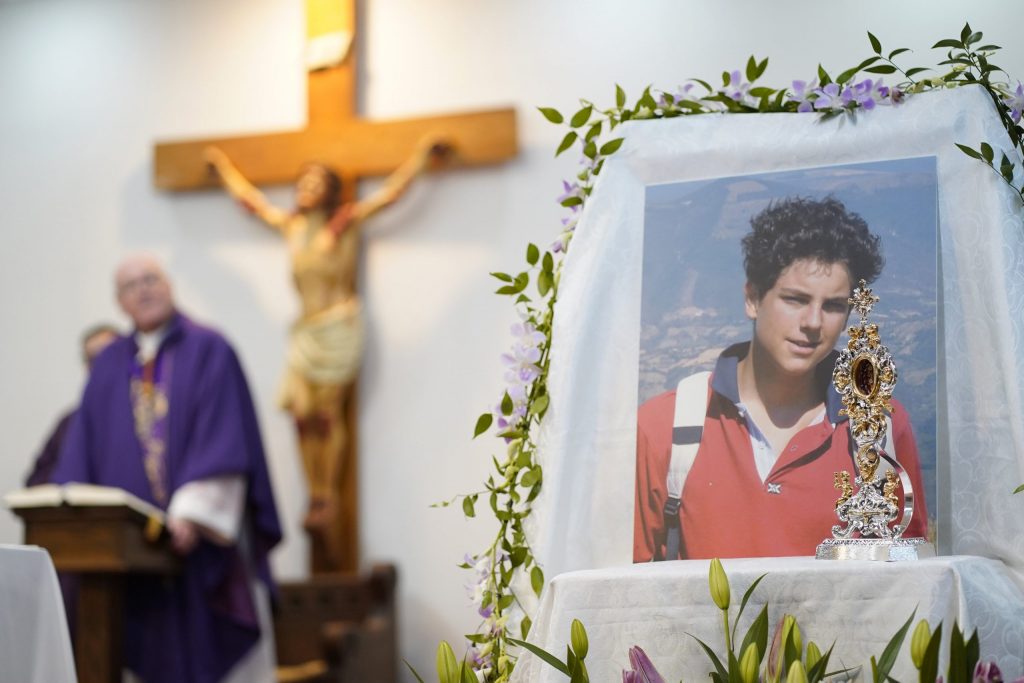 A reliquary containing a relic of Blessed Carlo Acutis is displayed during Mass at St. Rita of Cascia Church in the South Bronx, N.Y., April 7, 2022. At the conclusion of the liturgy, Archbishop Domenico Sorrentino of Assisi-Nocera Umbra-Gualdo Tadino, Italy, presented the reliquary to New York Cardinal Timothy M. Dolan, who accepted it on behalf of the U.S. bishops’ Committee on Evangelization and Catechesis. The committee is spearheading a three-year eucharistic revival for the U.S. church, and Catholics will have opportunities to venerate the relic as part of the revival. (CNS photo/Gregory A. Shemitz)