WASHINGTON (CNS) — The U.S. Supreme Court April 1 decided against hearing an appeal by pro-life activist David Daleiden, founder of the Center for Medical Progress, of a lower court’s decision not to dismiss a Planned Parenthood civil suit against him over undercover videos filmed in 2015. Planned Parenthood sued Daleiden in 2016, claiming among other things fraud, invasion of privacy and trespassing. The videos by Daleiden and his colleague Sandra Merritt showed Planned Parenthood officials discussing fees related to fetal tissue. The two posed as representatives of a mythical fetal tissue procurement firm. Planned Parenthood said monies it received were standard reimbursement fees charged to researchers and that any allegations it “profits in any way from tissue donation is not true.” But in the fall of 2015, Cecile Richards, then the CEO of Planned Parenthood, announced the organization would no longer accept the reimbursements. In January 2016, Daleiden and Merritt were indicted in Texas for filming medical providers without their consent, but all charges were dropped seven months later.

Minnesota sister, 92, honored for lifetime of fighting for human rights

ST. PAUL, Minn. (CNS) — Sister Alice Zachmann thinks of herself as being more of a peacemaker than a history maker. She is both, according to the National Women’s History Alliance, an organization based in Santa Rosa, California, that promotes greater understanding of women’s contributions to American society. The alliance selected Sister Zachmann as a 2019 honoree, and the 92-year-old sister planned to attend the March 30 awards luncheon in Washington. Sister Zachmann, a Minnesota native and Mankato resident, is among 11 honorees named this year; six are living, and five are deceased. She is being acknowledged for her life commitment in support of peace and human rights — issues that she began publicly advocating for in the 1960s and ‘70s while working as a teacher at various parish schools within the Archdiocese of St. Paul and Minneapolis.

MIDDLESEX, N.J. (CNS) — Father Carlos Martins preaches that for Catholics to reach heaven, they must possess forgiving hearts, participate in the sacraments and live their Christian identities to the fullest. The priest, a member of the Companions of the Cross community, travels around the United States and beyond speaking about the faith, and — perhaps more importantly — providing people with tangible evidence to pursue their devotion in the exposition and veneration of sacred relics. On a Saturday afternoon in March, Father Martins visited Our Lady of Mount Virgin Church in Middlesex to speak and host a special exposition, “Treasures of the Church.” With more than 150 relics in an A-Z list — from St. Agnes to St. Zelle Guerin, the mother of St. Thérese of Lisieux — the unique collection also included relics of well-known saints such as St. Maria Goretti, St. Francis of Assisi and St. Thomas Aquinas. As Father Martins’ presentation made clear, the experience was unlike anything that most attendees had witnessed. While non-Catholics might find the veneration of relics unusual or even strange, it is solidly rooted in Scripture and an important tradition of the Catholic Church, the priest explained during a 60-minute presentation before the exposition. Saints and their relics are not worshipped, but honored in a manner that acknowledges God’s work in their lives, he said.

VATICAN CITY (CNS) — Critics of an agreement signed between the Vatican and the Chinese government must be patient and not quick to judge a deal that is meant to protect religious freedom, the Vatican secretary of state said. After addressing a symposium on religious freedom April 3, Cardinal Pietro Parolin told journalists that the agreement was signed “to advance religious freedom in the sense of finding (some) normalization for the Catholic community” as well as other religious minorities. “Our hope is that it will help, not limit, religious freedom. But we should be patient,” he said, “I know that people want things immediately. History was not built in one day; history is a long process. And I think we have to put ourselves in this perspective.” Cardinal Parolin was among several guest speakers at the “Stand Together to Defend International Religious Freedom” symposium hosted by the U.S. Embassy to the Holy See. Also present was Callista Gingrich, U.S. ambassador to the Holy See.

HYATTSVILLE, Md. (CNS) — Archbishop Wilton D. Gregory, set to become the new head of the Archdiocese of Washington, promised to serve with truth, love and tenderness in a region where he acknowledged “unrest and anger,” after the downfall of former Washington Cardinal Theodore E. McCarrick and the Church’s current sex abuse scandal. “I want to offer you hope. I will rebuild your trust,” Archbishop Gregory said during an April 4 news conference. “I cannot undo the past, but I sincerely believe that together we will not merely address the moments we’ve fallen short or failed outright, but we will model for all the life and teaching of our Lord Jesus Christ and we will reclaim the future for our families, for those who will follow us. That is my greatest, indeed, it is my only aspiration.” Archbishop Gregory was introduced to media gathered for the announcement at the Archdiocese of Washington’s pastoral center in Hyattsville by Cardinal Donald W. Wuerl. Pope Francis accepted Cardinal Wuerl’s resignation as Washington’s archbishop in October and named him apostolic administrator. The cardinal, now 78, had submitted his resignation, as is mandatory, to the pope when he turned 75, but it had not been accepted until last fall. Cardinal Wuerl had faced pressure to resign following an Aug. 14 grand jury report detailing past sexual abuse claims in six Pennsylvania dioceses, which showed a mixed record of how he handled some of the cases when he was bishop in Pittsburgh from 1988 until 2006.

CHICAGO (CNS) — Chicago-based Catholic Extension has launched a crowdfunding campaign to raise $25,000 for a new emergency migrant shelter at the U.S.-Mexico border in Laredo, Texas. The national Catholic organization, which raises money on behalf of poor Catholic churches in the United States, started an emergency fundraiser for San Francisco Javier Church April 1. The shelter opened its doors to migrants in late March as an urgent response to an influx of asylum-seekers in the area. The first $10,000 has been sent to the church from funds raised from Catholic Extension in the first two days of the campaign. The Diocese of Laredo, which includes San Francisco Javier Church, is urging people to continue to donate to the campaign during this time of crisis. “I am very grateful for any assistance you can provide for the Diocese of Laredo’s migrant outreach,” Laredo Bishop James A. Tamayo said in an appeal to donors. “Your support will go directly to helping these vulnerable families seeking protection from violence, a warm meal, and the compassion of a welcoming church.” More information about the campaign and how to donate can be found at https://www.catholicextension.org/laredo. 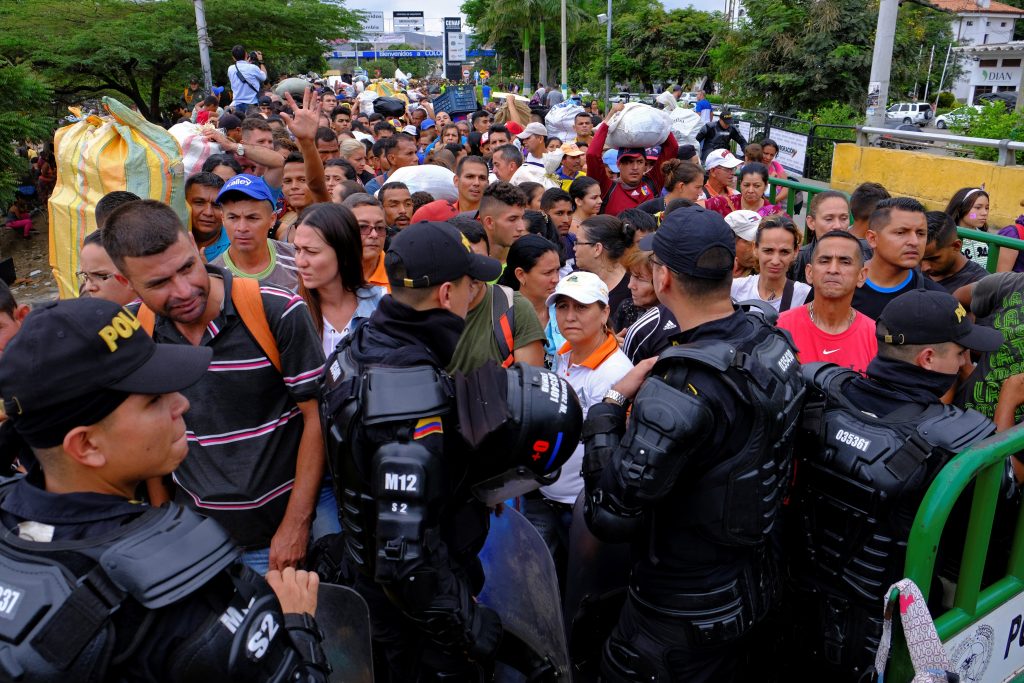 Colombian riot police block the way to the Colombian side in the Colombian-Venezuelan border in Cucuta April 2, 2019. Bishop Joe S. Vasquez of Austin, Texas, chairman of the U.S. bishops’ Committee on Migration, and Sean Callahan, President and CEO of Catholic Relief Services, have asked the U.S. government to designate Temporary Protected Status for Venezuela. (CNS photo/Ferley Ospina, Reuters)