Priest who died from virus called ‘great
missionary among us’

BROOKLYN, N.Y. (CNS) — Bishop Nicholas DiMarzio of Brooklyn March 28 announced the death of Father Jorge Ortiz-Garay, 49, who died the evening before from COVID-19. He was pastor of St. Brigid’s Church in the Wyckoff Heights area of the New York borough of Brooklyn and he also was diocesan coordinator of the ministry to Mexican immigrants. He died at Wyckoff Hospital Medical Center in Brooklyn from complications related to the coronavirus and is believed to be the first Catholic priest in the United States to die as a result of COVID-19. “This is a sad day and a tremendous loss for the Diocese of Brooklyn. Father Jorge was a great priest, beloved by the Mexican people and a tireless worker for all of the faithful in Brooklyn and Queens,” said Bishop DiMarzio, who issued a video statement in English and Spanish. He said Father Jorge, as he was called, had “underlying complications” which made him more vulnerable to the coronavirus. The bishop called the late priest “a great missionary among us,” especially in establishing the diocese’s Mexican apostolate. Father Jorge was born Oct. 16, 1970, in Mexico City. He was ordained to the priesthood in the Archdiocese of Newark, New Jersey, as a member of the Neocatechumenal Way May 29, 2004. He began his began ministry in the Brooklyn diocese in 2009. He was incardinated into the diocese Dec, 10, 2019, and had recently become a naturalized citizen.

WASHINGTON (CNS) — Saints can get a bad rap because sometimes people assume they lived in deep piety removed from the burdens of everyday life. But a quick look at the saints known for their ministry to the poor and outcast, the sick and dying, particularly during times of plagues, casts these men and women in a different light. The Catholic Church has numerous saints that fall under this category and a few particularly stand out now during this time of the COVID-19 global pandemic. Topping most lists as a patron saint of plagues is St. Roch, who lived during the Black Death in the 14th century. He was said to have cured plague victims he visited in Italy with his prayers and by marking the sick with the sign of the cross. Eventually, he too was sickened by the plague and is said to have withdrawn to a hut in the forest until he recovered. Legend has it a dog brought him food, which is why statues of St. Roch often include a dog at his side. Although the saint might seem far-removed from modern life, his care for plague victims certainly resonates today. In the U.S., there are several parishes named after him. One, in Oxford, Massachusetts, includes a prayer to the saint on its website asking the saint for “healing during this current health crisis during Lent and throughout the pandemic” and urging him to “intercede for the whole world.”

MEXICO CITY (CNS) — The Latin American bishops’ council announced plans to perform an act of consecration of Latin America and the Caribbean to Our Lady of Guadalupe on Easter, “asking her for health and an end to the pandemic.” The consecration will take place at noon April 12 behind closed doors at the Basilica of Our Lady of Guadalupe, but it will be transmitted digitally. Cathedrals and parishes throughout the region will participate by ringing their bells 12 times as a call to prayer. CELAM, as the Latin American and Caribbean bishops’ conference is known, said a Mass would be followed by the rosary and act of consecration for an end to COVID-19. The ceremony will include a presentation of a floral wreath in the same place where, in 2016, Pope Francis prayed silently to Our Lady of Guadalupe for the whole world.

As pandemic grows, a family wishes its essential worker could stay home

WASHINGTON (CNS) — Before Juan Vasquez says goodbye to wife Tanya Granillo de Vasquez and 1-year-old son Robert as he goes off to work each morning, the three gather and then the husband and wife pray. “Faith is what’s important at this moment,” said wife Tanya. “We give thanks and then we ask for protection … I ask that he (Juan) be returned to us as he left, to come home to a family that waits for him.” In the age of the coronavirus, grocery store workers, like Juan Vasquez of Uniondale, New York, have become unlikely heroes around the globe, the only lifeline to the outside world for many, and the ones who keep quick access to food and products essential to daily survival — a role that, like agricultural workers, was never celebrated, until a virus brought the world to a halt. It was a role that never seemed dangerous — until the new coronavirus arrived. “They’re not just exposing their lives to help other people, but they’re also doing their best to not expose (their families),” said Tanya Vasquez in a March 28 WhatsApp audio interview with Catholic News Service. Because both Vasquezes are Catholic and have a special devotion to Mary, they ask for her intercession, not just to keep the head of the household free of COVID-19, the disease the virus causes, but for the protection of the whole family. Prayer and faith are the only weapons to survive the painful and anxiety-driven day that has become part of their daily routine, Tanya Vasquez said. “Believe me, I feel as if I’m discriminating (against) him,” Tanya Vasquez said. “But it has to be done.”

WASHINGTON (CNS) — Pope Francis has accepted the resignation of Bishop Edward K. Braxton of Belleville, Illinois, and has appointed Father Michael G. McGovern, a pastor in the Archdiocese of Chicago, as his successor. Bishop Braxton, who has headed the Belleville Diocese since 2005, turned 75 last June, the age at which bishops are required to turn in their resignation to the pope. Bishop-designate McGovern, who was ordained to the priesthood May 21, 1994, by Chicago Cardinal Joseph L. Bernardin, is currently pastor of St. Raphael the Archangel Church in Old Mill Creek, Illinois. The appointment was announced April 3 in Washington by Archbishop Christophe Pierre, apostolic nuncio to the United States. Bishop Braxton, one of the nation’s 10 African American Catholic bishops, welcomed his successor in the name of the faithful of the diocese and in his own name, “assuring him of our fervent prayer.” “I pray the Holy Spirit will empower him with the grace and gifts he will need” to spread the Gospel in the small mostly rural diocese with limited pastoral resources diocese. Due to the coronavirus, a date has not yet been set for Bishop-designate McGovern’s episcopal ordination and installation as Belleville’s ninth bishop.

Archdiocese to livestream display Shroud of Turin on Holy Saturday

VATICAN CITY (CNS) — With people forced to stay home, even during Holy Week, because of the coronavirus pandemic, the archbishop of Turin has announced a special online exposition of the Shroud of Turin, which many believe is the burial cloth of Jesus. On Holy Saturday, April 11, as Christians contemplate Jesus lying in the tomb, Archbishop Cesare Nosiglia will lead a liturgy of prayer and contemplation before the shroud at 5 p.m. local time (11 a.m. EDT). The prayer service will be live-streamed along with live images of the 14-foot-by-4-foot shroud, which has a full-length photonegative image of a man, front and back, bearing signs of wounds that correspond to the Gospel accounts of the torture Jesus endured in his passion and death. As of April 5, the Archdiocese of Turin said it was finalizing the plans and would publish a list of participating television stations and links to the livestream later in the week. 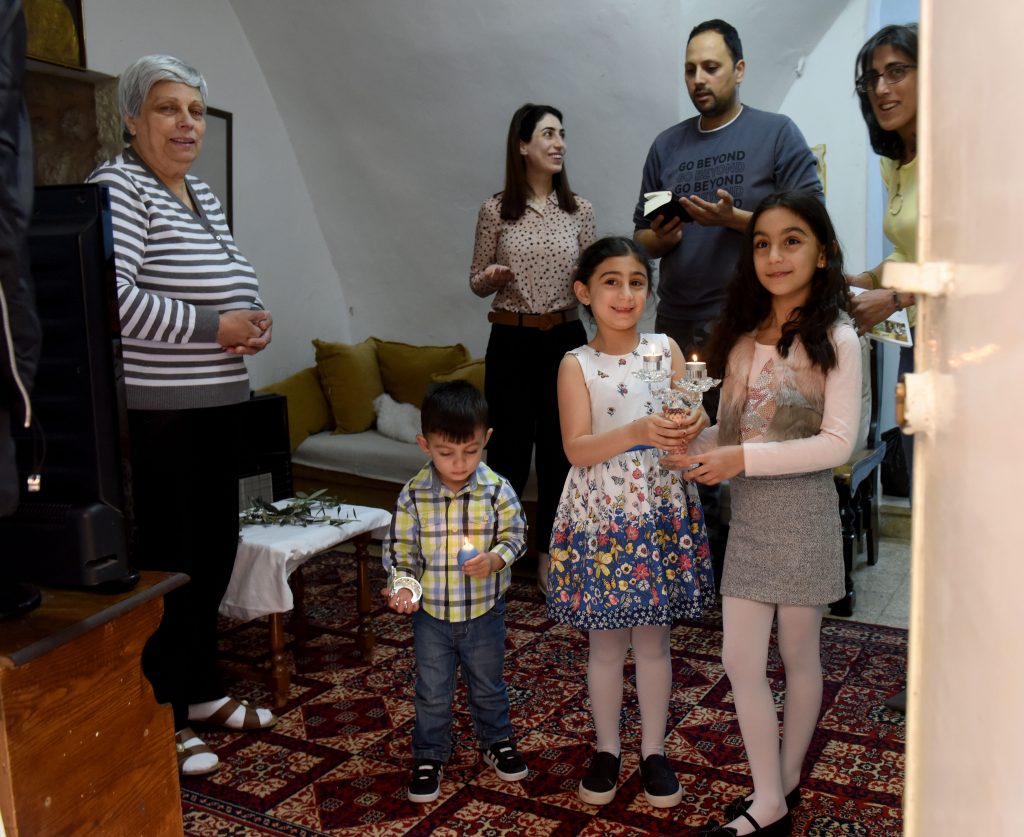 A Palestinian Catholic family holds candles in their home in Jerusalem’s Old City on Palm Sunday, April 5, 2020. The traditional Palm Sunday procession from the Mount of Olives to the Old City was canceled because of the coronavirus pandemic. (CNS photo/Debbie Hill)