LAGOS, Nigeria (CNS) — While Catholic and Muslim leaders welcomed the release of 104 schoolgirls captured by Boko Haram, they urged the government to work for the release of the remaining girl, a Christian who reportedly refused to denounce her faith. The schoolgirls, kidnapped Feb. 19, were released March 21. Five of them were killed during captivity. But a March 22 statement from Muslim Rights Concern, a nongovernmental organization, quoted one of the freed girls as saying that the lone remaining captive, Leah Sharibu, was not released because she is a Christian and she refused to put on hijab or convert. “We reiterate for the umpteenth time that Boko Haram’s doctrine is heretical, and its methods stand in contradistinction to those of pristine Islam,” Muslim Rights Concern said of the extremist group. “Once again, we reject Boko Haram as an Islamic group. We urge the leadership and members of the group to re-examine its ideological base.” Bishop Emmanuel Badejo of Oyo praised the government for ensuring the release of 104 of the girls from a science and technical school in Dapchi, but said the litmus test would he the release of Sharibu. He described the death of five of the girls in captivity as evoking “more than a touch of lament and sadness.”

HONG KONG (CNS) — China’s ruling Communist Party has further stepped up control over all religions, dissolving its long-standing State Administration for Religious Affairs bureau and handing its functions to the party’s United Front Work Department. Ucanews.com reported the move was announced on the closing day of the annual “two meetings” in Beijing and comes as part of a comprehensive bureaucratic overhaul of the entire Chinese bureaucracy and only seven weeks after stricter new rules on religion were introduced on Feb. 1. The official line from the state-run Xinhua News Agency ran like this: “The CPC (Communist Party of China) exercises overall leadership over all areas of endeavor in the country, and the reform is meant to strengthen the party’s leadership in all areas and improve the structure of the party organization, according to the plan. The plan says that some state institutions previously under the leadership of the State Council have been dissolved or integrated into a new agency under the leadership of the CPC Central Committee, such as the State Administration for Religious Affairs, Overseas Chinese Affairs Office of the State Council, and Ministry of Supervision and National Bureau of Corruption Prevention.”

LIMA, Peru (CNS) — Less than two months after Pope Francis spoke out about environmental destruction in the Amazon basin during a visit to Peru, bishops from Latin America and the Caribbean have issued a pastoral letter calling the region’s Catholics to an “integral ecological conversion.” The letter, published in early March, reflects on environmental issues in Latin America in light of “Laudato Si’,’ on Care for Our Common Home,” Pope Francis’ 2015 encyclical. The Latin American bishops’ council, CELAM, spent seven years drafting the pastoral letter, which will serve as input for the commission planning the Synod of Bishops for the Amazon, to be held at the Vatican in 2019. The letter highlights “the serious consequences of the unbridled exploitation of natural resources and awareness that we must care for our common home,” said Archbishop Pedro Barreto Jimeno of Huancayo, Peru, who oversaw much of its drafting. The economies of many Latin American countries depend largely on exports of raw materials, especially minerals, the bishops note. Those countries experienced an economic boom over the past decade and a half because of high prices for oil, minerals and other commodities.

WASHINGTON (CNS) — The chairmen of the U.S. bishops’ pro-life and religious freedom committees said it was “deeply disappointing” that Congress omitted the Conscience Protection Act from the congressional funding bill for fiscal year 2018. “We call on Congress not to give up until this critical legislation is enacted,” said a March 22 joint statement from Cardinal Timothy M. Dolan of New York, chairman of the bishops’ Committee on Pro-Life Activities, and Archbishop Joseph E. Kurtz of Louisville, Kentucky, chair of the Committee for Religious Liberty. The church leaders said the legislation is “an extraordinarily modest bill that proposes almost no change to existing conscience protection laws on abortion laws that receive wide public and bipartisan support.” They also said it aims to “provide victims of discrimination with the ability to defend their rights in court to help ensure that no one is forced to participate in abortion.” The statement added that those “inside and outside of Congress who worked to defeat” this legislation “have aplaced themselves squarely into the category of extremists who insist that all Americans must be forced to participate in the violent act of abortion.”

At global forums, church leaders advocate for safe water for all

BRASILIA, Brazil (CNS) — Erileid Domingues said most of her indigenous village has, at one time or another, fallen ill due to contaminated water. Domingues said her village in the state of Mato Grosso do Sul is surrounded by large soybean and corn plantations that use agro-toxins in their crops, which eventually seep into the soil and make their way into the waterbeds, contaminating rivers and wells used by her Guarani-Kaiowa tribe. “Our fish have become contaminated; we can’t grow a vegetable garden because the water is also bad,” she told Catholic News Service. “Days after small planes spray the plantations, water from our wells turns milky white and remains that way for several weeks. Many of us suffer from chronic stomach pains and allergies.” To tackle the question of global access to clean water, hundreds of experts, policymakers, nongovernmental groups and members of civil society came together for two water forums held in mid-March in Brazil’s capital, Brasilia. Access to clean water is a fundamental right must be a global priority, said Catholic leaders present at the 8th World Water Forum and the Alternative World Water Forum. Catholic representatives spoke about the need to find ways to create a sustainable supply of fresh drinking water for all, especially the poorer populations around the world.

MANCHESTER, England (CNS) — An English bishop is urging people living on an island in the English Channel to resist an attempt to allow assisted suicide. Bishop Philip Egan of Portsmouth criticized proposals to decriminalize assisted suicide on the island of Guernsey, part of his diocese. In a letter due to be read out loud in Guernsey parishes March 25, Bishop Egan said he wished to appeal to all people of goodwill “to overturn this grim proposal. Let there be no death clinics in Guernsey,” Bishop Egan said. “I appeal to Catholics to mobilize. Speak out against this proposal. It is never permissible to do good by an evil means.” The bill scheduled to be considered by legislators in May is “fundamentally subversive, horrific and dangerous, however well-intentioned,” he said in his letter, which he emailed to Catholic News Service March 23.

MANILA, Philippines (CNS) — There will be no Holy Week observance this year in Marawi almost a year after extremist gunmen occupied the southern Philippine city. The Catholic cathedral remains closed. It was desecrated and burned at the height of the five-month conflict that ended in October. It was to be the first time that Holy Week has not been celebrated in the predominantly Muslim city, where more than 300,000 people remain in temporary shelters, ucanews.com reported. Priests from nearby dioceses have volunteered to celebrate Masses on a university campus in the city. Bishop Edwin de la Pena of Marawi assured Catholics in the region that other parishes not affected by the fighting will continue their ministries. St. Mary’s Cathedral in Marawi was destroyed when Islamic State-inspired gunmen entered in May. Even the vicar-general of the Marawi prelature will not be returning to the city soon. Father Teresito Soganub said he was still in “the healing stage” after his abduction by gunmen. “I won’t be able to go back to my regular ministry yet,” he said. 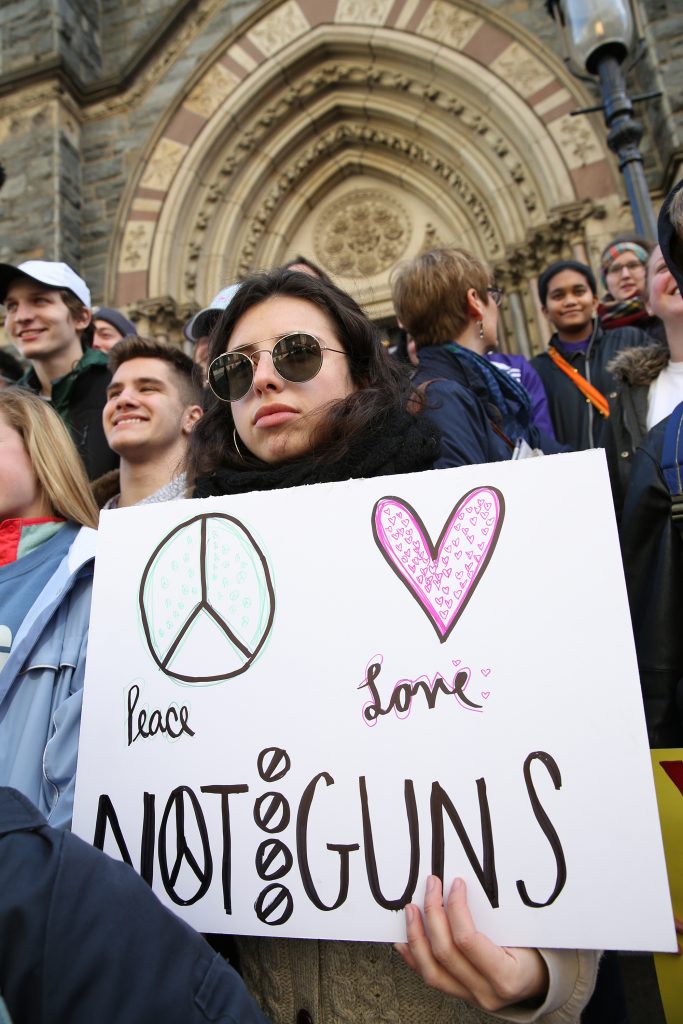 Francesca Kern, a senior at Mercyhurst Preparatory School in Erie, Pa., holds a sign following a March 24 Mass at St. Patrick Catholic Church in Washington. The Mass, sponsored by Catholic Charities of the Archdiocese of Washington, was celebrated to give students an opportunity to pray before participating in the March for Our Lives. (CNS photo/Jaclyn Lippelmann, Catholic Standard)