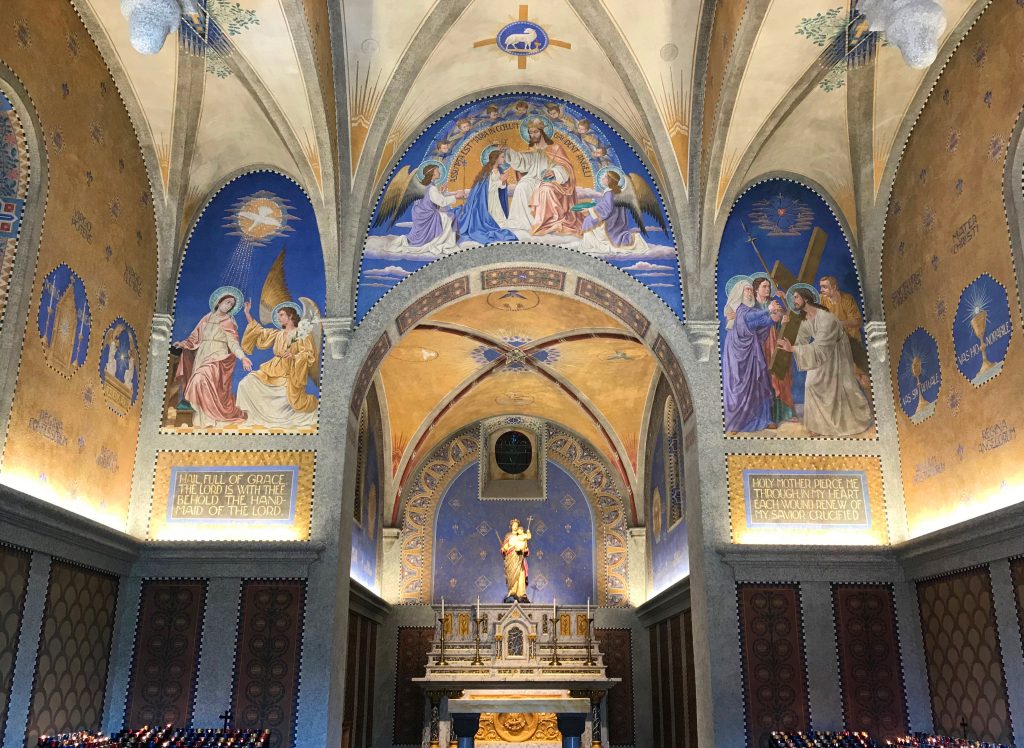 The interior of Monte Cassino Shrine in St. Meinrad, Ind., is seen Oct. 1 after two years of restoration efforts. The small sandstone shrine, named after the famous Italian monastery founded by St. Benedict, has a history nearly as long as the nearby Benedictine-run St. Meinrad Archabbey, dating back to 1870. The 24-by-50-foot chapel was visited by hundreds of pilgrims Oct. 1 as the first Mass was celebrated following the restoration project.

WASHINGTON (CNS) — The chairman of the U.S. bishops’ Committee on Migration called on the federal government to work with the Myanmar government and the international community to solve the crisis affecting the persecuted Rohingya people. Bishop Joe S. Vasquez of Austin, Texas, said in written testimony to the House Committee on Foreign Affairs Oct. 5 that the situation affecting the largely Muslim Rohingya population in Myanmar deserve “safe, humane and voluntary durable solutions” as they struggle amid violence that has caused them to flee their homeland. More than 500,000 Rohingya have fled Myanmar’s Rakhine state to Bangladesh since Aug. 25, after government forces began retaliating after attacks on security check posts by militants from the Arakan Rohingya Salvation Army. The conflict has resulted in more than 1,000 Rohingya deaths, dozens of houses burned and countless women being raped. Bishop Vasquez offered several recommendations to the House committee, including steps to stabilize the situation in Rakhine state and Bangladesh, provide protection and humanitarian assistance for the displace Rohingya, resettlement of Rohingya in other countries as necessary, and work for long-term peace while addressing the root causes for the displacement of people from Myanmar, also known as Burma.

WASHINGTON (CNS) — The theme for the 45th annual March for Life will be “Love Saves Lives: Life Is the Loving, Empowering and Self-Sacrificial Option.” The March for Life Education and Defense Fund announced the theme for the 2018 rally and march at a briefing on Capitol Hill Oct. 3 with Jeanne Mancini, president of the March for Life organization and other pro-life leaders in Washington. She moderated a panel discussion on “how the pro-life movement continues to empower women” with Susan Gallucci, executive director of the Northwest Center, which offers a range of services to pregnant women and new mothers; Chuck Donovan, president of Charlotte Lozier Institute, the research and education institute of the Susan B. Anthony List; and Alison Howard Centofante, director of alliance relations at Alliance Defending Freedom, a nonprofit legal group that supports pro-life, religious freedom and other issues. The March for Life will take place Jan. 19, which is a Friday and comes ahead of the Jan. 22 anniversary of the U.S. Supreme Court’s 1973 ruling in Roe v. Wade.

WASHINGTON (CNS) — The U.S. House Oct. 3 passed the Pain-Capable Unborn Child Protection Act, which bans abortions after 20 weeks of gestation, about the time doctors have determined that an unborn child can feel pain. Introduced by Rep. Trent Franks, R-Arizona, it would punish doctors who perform an abortion after 20 weeks, except in cases of rape, incest or if the life of the mother is threatened. Physicians could face up to five years in prison. Women seeking abortions would not be penalized under the bill. In a statement Oct. 2, the Trump administration said it strongly supported the bill, H.R. 36, and “applauded the House of Representatives for continuing its efforts to secure critical pro-life protections.” President Donald Trump said he would sign the measure if it reached his desk. The Senate still must schedule consideration of the bill but that seemed unlikely. Senate Whip John Cornyn, a Texas Republican, told reporters, “That’s not a near-term priority.” In a Sept. 29 letter to House members, Cardinal Timothy M. Dolan of New York, chairman of the U.S. bishops’ Committee on Pro-Life Activities, urged passage of the bill, calling it “common-sense reform.”

NOTRE DAME, Ind. (CNS) — Mary Ann Glendon, a Harvard professor of law and former U.S. ambassador, has been named the 2018 recipient of the Evangelium Vitae Medal bestowed by the University of Notre Dame’s Center for Ethics and Culture. The recipient is announced annually on Respect Life Sunday, which this year was Oct. 1. The award, comprised of a specially commissioned medal and $10,000 prize, will be presented at a Mass and banquet April 28 at Notre Dame. Named for St. John Paul II’s 1995 encyclical on life issues, the Notre Dame Evangelium Vitae Medal is a lifetime achievement award given to “heroes of the pro-life movement.” It honors individuals whose efforts have served “to proclaim the Gospel of human life by steadfastly affirming and defending its sanctity from its earliest stages. Glendon is one of the most extraordinary figures in academia and the global public square,” said O. Carter Snead, director of the Center for Ethics and Culture, adding that she “personifies” what is at “the heart of the Evangelium Vitae Medal.”

Child Martyrs of Tlaxcala recalled for their devotion to faith

MEXICO CITY (CNS) — Blessed Cristobal was about 12 or 13 when he confronted his father in 1527 over drinking “pulque,” an alcoholic beverage made from fermented sap of agave plant. He poured out the pulque in the family home and told his father, a cacique (local leader) called Acxtecatl, to give up idolatry. His father, according to an account from the Diocese of Tlaxcala, Mexico, locked Blessed Cristobal in his room and repeatedly beat him. The youth, lying on his death bed, told his father, “Oh father, do not think that I am angry because I am very joyous. Know that you have honored me in a way much more than all your lands and titles.” Acxtecatl attacked his son again, killing him, but also making Blessed Cristobal one of the first martyrs in Mexico and the New World. Blessed Cristobal, along with two other indigenous Tlaxcalteca youths, Blessed Antonio and Blessed Juan, will be canonized Oct. 15 at the Vatican. The latter two were 12 or 13 at the time of their deaths in 1529. The trio, known as the Child Martyrs of Tlaxcala, were among the early converts to Christianity in Mexico. They are considered the first martyrs in the Americas, “protomartires,” because they were killed for their faith and will be canonized for that reason.

VATICAN CITY (CNS) —Emphasizing the hope for a nuclear-free world, the Nobel committee announced its decision to award the 2017 Nobel Peace Prize to the International Campaign to Abolish Nuclear Weapons. The organization, also known by the acronym ICAN, was commended for its work in drawing attention “to the catastrophic humanitarian consequences of any use of nuclear weapons,” the committee said, announcing the prize Oct. 6. “It is the firm conviction of the Norwegian Nobel committee that ICAN, more than anyone else, has in the past year given the efforts to achieve a world without nuclear weapons a new direction and new vigor,” it said. Launched in 2007, the organization is a coalition of nongovernmental organizations in 101 countries aimed at promoting global nuclear disarmament. The Nobel committee honored ICAN for its efforts to achieve a prohibition of nuclear weapons under international law through the U.N. Treaty on the Prohibition of Nuclear Weapons.

VATICAN CITY (CNS) — Roughly half of the Vatican’s 110 acres is devoted to gardens, and a major project is underway to keep them as “green” as possible. It’s not about watering the plants, although that was a big concern this year with a drought in Italy. The Vatican Museums and the Vatican City governor’s office — which includes the gardeners —are involved in a five-year project to develop ecologically friendly cleaning agents and techniques to clean, restore and maintain the 570 works of art on display outside. Those works include fountains, statutes and stone plaques. The project involves art experts and biologists.