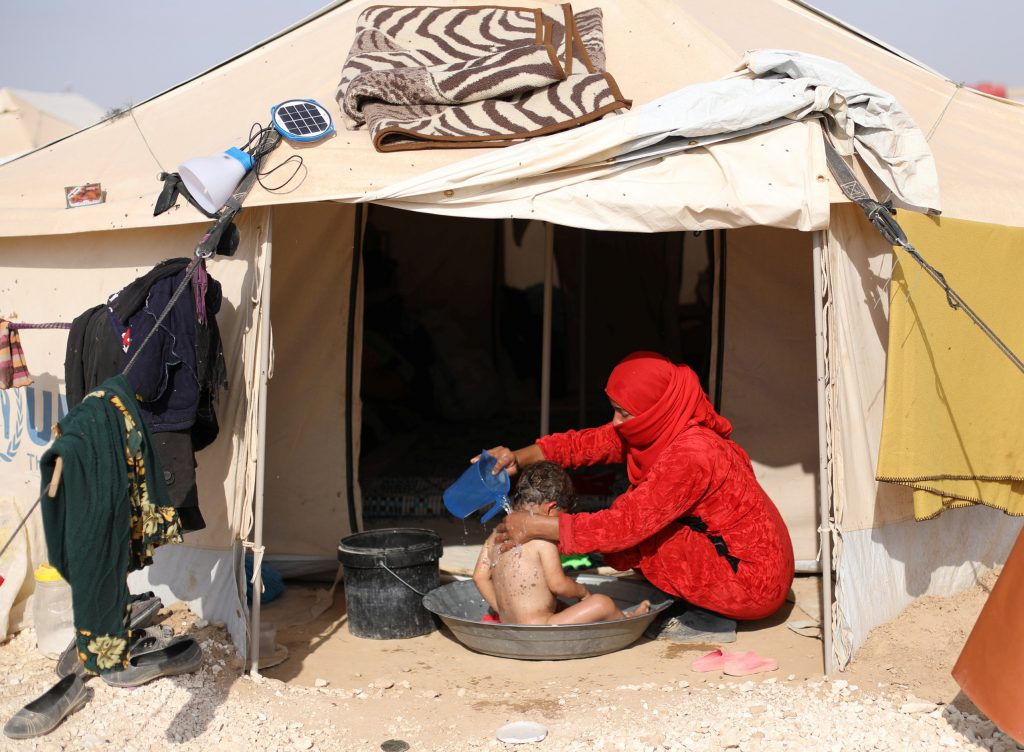 Exploiting a fear of migrants and refugees for political gain increases the possibility of violence and discrimination and does nothing to build a culture of peace, Pope Francis said in his message for World Peace Day 2018. The pope chose “Migrants and refugees: Men and women in search of peace” as the theme for the celebration that will take place Jan. 1, 2018. The message is delivered by Vatican nuncios to heads of state and government around the world, and the full text will appear in the Dec. 24 issue of Today’s Catholic. Above, an internally displaced Syrian woman bathes her child at Qana refugee camp in Al-Hasakah, Syria. (CNS photo/Rodi Said, Reuters)

VATICAN CITY (CNS) — Although it was not possible to visit South Sudan as he had hoped, Pope Francis said that “prayer is more important, because it is more powerful. Prayer works by the power of God for whom nothing is impossible.” With hundreds of women and men from dozens of religious orders, with migrants from Africa and representatives from a number of Christian churches and a variety of religions, the pope presided Nov. 23 over an evening prayer service for peace in South Sudan and Congo. As the service began in St. Peter’s Basilica, religious carried in procession large photographs of women and children from the two wartorn countries. The images were placed on easels at the foot of the sanctuary steps. Flanking the photos were paintings of St. Josephine Bakhita from Sudan and Blessed Anuarite Nengapeta from Congo. On the cross, Pope Francis said, Jesus “took upon himself all the evil of the world, including the sins that spawn and fuel wars: pride, greed, lust for power, lies.”

VATICAN CITY (CNS) — Pope Francis has established a new section in the Vatican Secretariat of State to oversee the training, assigning and ministry of Vatican nuncios and diplomats around the world. The Section for Diplomatic Personnel will be concerned “exclusively with questions pertaining to the people who work in the diplomatic service of the Holy See or who are preparing to do so,” said a statement Nov. 21 from the Secretariat of State. The section will oversee “the selection, initial and ongoing formation, the living and serving conditions, promotions” and other matters, the statement said. The head of the section, Polish Archbishop Jan Pawlowski, also will “convoke and preside over ad hoc meetings to prepare the nominations of pontifical representatives,” who formally are nominated by the pope and usually are made archbishops with their first posting as a nuncio or apostolic delegate. The diplomatic staff at the Vatican embassies around the globe and most of the archbishops who serve as nuncios are alumni of the Pontifical Ecclesiastical Academy. There the future diplomats receive specialized training as they complete advanced degrees — usually in Canon Law — at a pontifical university in Rome. They also must study languages.