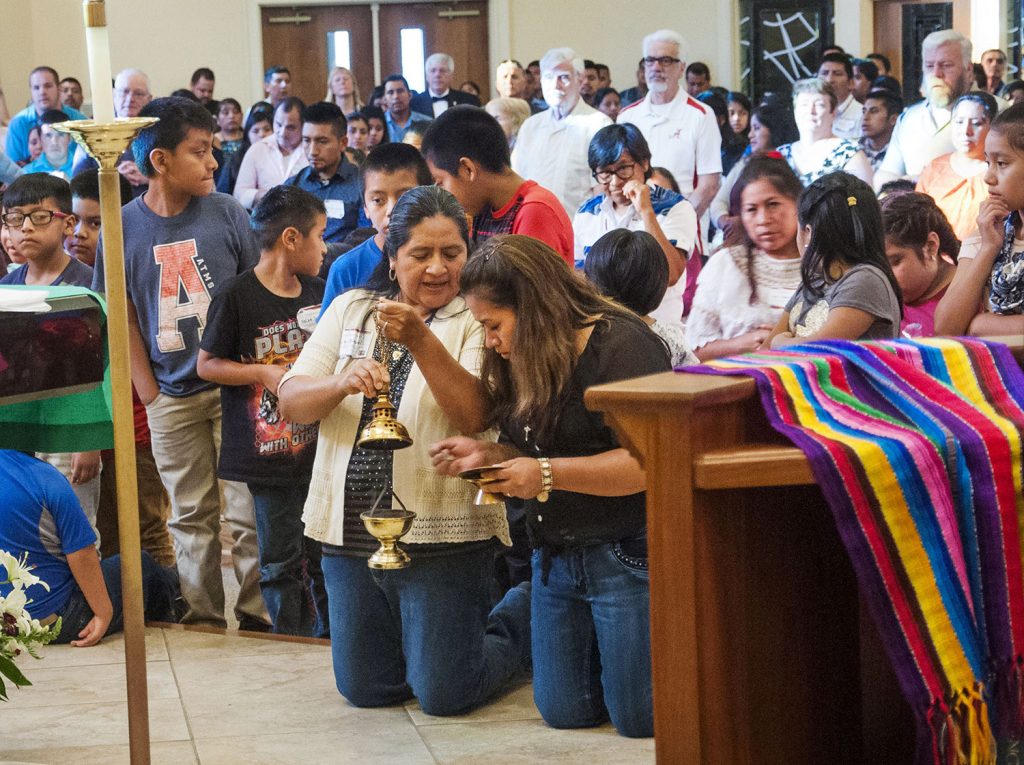 VATICAN CITY (CNS) — Signaling a turning point in ecumenical relations with the Catholic Church, the World Communion of Reformed Churches signed an agreement on a key issue that divided Catholics and Protestants for centuries. In an ecumenical ceremony July 5 in Wittenberg, Germany, the city where Martin Luther nailed his “95 Theses” that marked the beginning of the Reformation, the Reformed churches adopted the Joint Declaration on the Doctrine of Justification. The agreement, which explains how people are justified in God’s eyes and saved by Jesus Christ, was first signed in 1999 by Catholics and Lutherans. The World Methodist Council adopted the doctrine in 2006. The Reformed Churches represent an estimated 80 million Christians in Congregational, Presbyterian, Reformed, United, Uniting and Waldensian churches around the world. In a statement published July 4, the Pontifical Council for Promoting Christian Unity referred to the event “as another important milestone on the journey toward the full visible unity of Christians; not yet the end of the road, but a significant stage on the way.”

WASHINGTON (CNS) — The House Appropriations Committee voted July 13 in favor of an amendment to repeal the District of Columbia’s assisted suicide law. The day before the vote, New York Cardinal Timothy M. Dolan sent a letter to members of the committee urging them to “nullify the D.C. City Council’s deceptively named ‘Death with Dignity Act’ that legalizes the dangerous and unethical practice of doctor-assisted suicide.” The amendment to the fiscal year 2018 Financial Services and General Government Appropriations bill looks to repeal the assisted suicide law, which went into effect this past February. It was introduced by Rep. Andy Harris, R-Maryland, who told the committee there is “nothing dignified about suicide” in his opinion. Harris also called the act “bad policy” and said that “physicians were playing God” by prescribing lethal medications to terminally ill patients who want to end their lives. The legislation permits physicians in the District of Columbia to legally prescribe lethal drugs to patients who have been deemed mentally competent and who have received a terminal diagnosis of six months or less. In his July 12 letter to House Appropriations Committee members, Cardinal Dolan said the law was “seriously flawed” and said it “poses the greatest risks of abuse and coercion to those who are poor, elderly, disabled, members of a minority group, or without access to good medical care.”

WASHINGTON (CNS) — As chapels go, the simple structure on property owned by the Adorers of the Blood of Christ congregation in Columbia, Pennsylvania, is not much. It’s more of an arbor, really: four posts and several cross boards built near a cornfield on farmland the sisters lease. Several pew-like benches are arranged around it. Still, said the sisters, it stands as a symbol of resistance by people of faith to a planned natural gas pipeline called Atlantic Sunrise that developers want to build through miles of farmland and small towns of picturesque Lancaster County. The pipeline’s path takes it through a strip of land the congregation owns in the Harrisburg Diocese that includes farmland and the sisters contend that construction poses a danger to God’s creation. They have declined repeated offers of compensation from Transco, the project’s developer, to allow an easement for it to be built. “This is something that we felt as a matter of conscience,” said Sister Sara Dwyer, coordinator of the congregation’s justice, peace and integrity of creation ministry. “We had to look at it more deeply and take a stronger stand.”

WASHINGTON (CNS) — In comments delivered July 17 to the Federal Communications Commission, the U.S. Conference of Catholic Bishops urged the FCC to use “the strongest legal authority available” to “retain open internet regulations.” The current regulations, adopted in 2015 by a Democratic-majority FCC, treat the internet as a utility. A prior FCC effort to regulate the internet as a communication service did not stand up to judicial scrutiny. The regulations are now under review by a Republican-led FCC. The concept of an open internet has long been called “net neutrality,” in which internet service providers neither favor nor discriminate against internet users or websites. The USCCB is “concerned that the FCC is contemplating eliminating current regulations limiting the manner by which the companies controlling the infrastructure connect people to the internet,” said USCCB assistant general counsel Katherine Grincewich. “Without the current strong open internet regulations, including prohibitions on paid prioritization, the public has no effective recourse against internet service providers’ interference with accessibility to content,” Grincewich said.

WASHINGTON (CNS) — Denouncing the “demonization of migrants,” hateful rhetoric, the militarization of the border and a system that divides families, Bishop Mark J. Seitz of El Paso, Texas, called on Catholics to heed the church’s teachings to welcome the migrant. In a July 18 pastoral letter “Sorrow and Mourning Flee Away,” on migration and addressed to the “People of God in the Diocese of El Paso,” Bishop Seitz, who serves a border community near Mexico, said the country’s security cannot be used as a “pretext to build walls and shut the door to migrants and refugees. God did not create a world lacking room for all at the banquet of life,” he wrote. He said that while some might question his reflections, “I am not substituting politics for the teaching of the church,” but as a pastor, his “duty is to the Gospel of Jesus Christ,” he wrote. And the Gospel in the Old Testament is clear, he said: “You shall treat the alien who resides with you no differently than the natives born among you.” Bishop Seitz also criticized a system that “permits some to detain human beings for profit,” while eroding the country’s “historic commitment to the refugee and asylum seeker.” In the letter, he shared personal anecdotes. One involves a teenager named Aura he met at a sister parish in Honduras, who later decided to make the trip north to escape extreme poverty and violence. She was caught by immigration authorities and ended up in a detention center in El Paso, but not before experiencing “serious physical and psychological wounds.”

WASHINGTON (CNS) — The U.S. House budget resolution “will place millions of poor and vulnerable people in real jeopardy” because it reduces deficits “through cuts for human needs” and by trying to slash taxes at the same time, said the chairman of the U.S. bishops’ domestic policy committee. “A nation’s budget is a moral document,” said Bishop Frank J. Dewane of Venice, Florida, chairman of the U.S. Conference of Catholic Bishops’ Committee on Domestic Justice and Human Development. “Congress should choose a better path, one that honors those struggling in our country.” Bishop Dewane’s July 20 statement was issued in response to the budget resolution that was voted out of the House Budget Committee along party lines July 19. The nonbinding Republican measure is a 10-year budget blueprint that calls for $621.5 billion in national defense spending, provides for $511 billion in nondefense spending and ties cuts to a major overhaul of the U.S. tax code. It makes at least $203 billion in cuts over a decade in Medicaid, food stamps, tax credits for the working poor and other programs that help low-income Americans. The bill also would change Medicare into a type of voucher program for future retirees.

SAN ANTONIO (CNS) — The “completely senseless deaths” of 10 people who died of heat exhaustion and suffocation they suffered from being held in a tractor-trailer “is an incomprehensible tragedy,” said Archbishop Gustavo Garcia-Siller of San Antonio. “There are no words to convey the sadness, despair and, yes, even anger we feel today,” he said in a statement released late July 23. Earlier in the day, San Antonio law enforcement officials found eight bodies inside the trailer of an 18-wheeler sitting in the parking lot of a Walmart. The eight people who died were among 39 people packed in the trailer and suffering from extreme dehydration and heatstroke. At least 20 others rescued from the truck were in critical condition and transported to the hospital. Two later died, and by July 24 the death toll was at least 10. In a July 24 statement, the chairman of the U.S. Conference of Catholic Bishops’ Committee on Migration said the nation’s Catholic bishops joined their voices in mourning the loss of life and condemning the treatment of migrants, many of whom were from Mexico and Guatemala, in a suspected human trafficking operation. “The loss of lives is tragic and avoidable. We condemn this terrible human exploitation that occurred and continues to happen in our country,” said Bishop Joe S. Vasquez of Austin.

MANCHESTER, England (CNS) — Pope Francis is praying for the parents of Charlie Gard after a U.S. doctor told them nothing could be done to help their son. Chris Gard and Connie Yates announced in London’s High Court July 24 that they had ended their legal struggle to take their baby overseas for treatment after a U.S. neurologist, Dr. Michio Hirano, said he was no longer willing to offer Charlie experimental nucleoside therapy after he examined the results of a new MRI scan. Their decision means that the child, who suffers from encephalomyopathic mitochondrial DNA depletion syndrome, will receive only palliative care and most likely will die before his first birthday Aug. 4. Greg Burke, director of the Vatican press office, said in a July 24 statement that Pope Francis, who had taken a personal interest in the case, “is praying for Charlie and his parents and feels especially close to them at this time of immense suffering.” He said: “The Holy Father asks that we join in prayer that they may find God’s consolation and love.” The Bishops’ Conference of England and Wales also issued a statement July 24 in which they expressed their “deepest sympathy and compassion” for Charlie and his parents. “It is for Charlie, his parents and family that we all pray, hoping that they are able, as a family, to be given the support and the space to find peace in the days ahead,” the statement said.