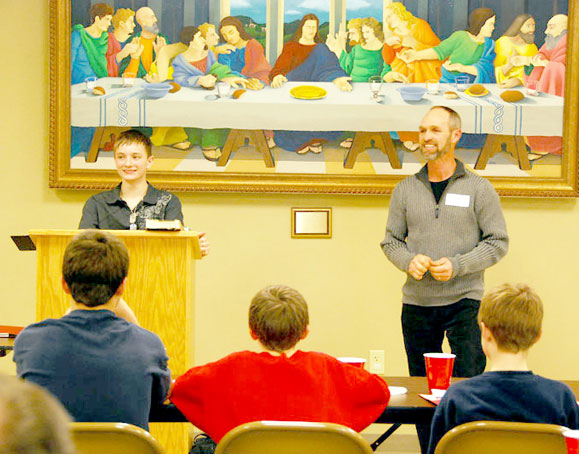 Catholic News Around Indiana
Compiled by Brandon A. Evans

Diocese of Evansville
Campaign to bring more Hispanic students into Catholic schools
By MARY ANN HUGHES (Message staff writer)
In November of 2009, a national task force commissioned by the University of Notre Dame launched a campaign to improve educational opportunities for the next generation of American Latinos by expanding their access to Catholic schools.

The U.S. bishops have lauded the campaign which seeks to double the percentage of Hispanic students enrolled in Catholic schools, bringing their number to one million by 2020.

Father Henry Kuykendall is the pastor at Nativity Church which is located on Evansville’s southeast side. It’s a parish with a growing Hispanic population.

He’s been the pastor there since 1990, and under his direction the parish has launched a campaign to get poor Latino students — in grades kindergarten, one and two — into four Catholic schools in Evansville: Christ the King, Holy Rosary, Holy Spirit and St. Theresa during the 2010-2011 school year.

Under an agreement with the four parishes, Nativity will pay $1,000 of each student’s tuition and the four parishes will cover the rest of the costs. Their Latino families, if they are able, will donate $15 a week to the “Adopt a Student” fund.

Providing Latino students with a Catholic education is the very best way to provide future leadership in the Church, Father Kuykendall believes. He cites sociologist Father Andrew Greeley who says, “the only hope of the Catholic Church are Catholic schools.”

There are an estimated 10,000 Hispanics currently living in Vanderburgh and Warrick counties, and “87 percent of Mexican Hispanics are Catholic,” Father Kuykendall said, asking, “What is the future for them?”

“They have all different levels of education,” he said, adding that he believes “the only hope for the Latino community is Catholic education. That’s how the Germans, the Italians and the Irish made it. You get them in Catholic schools and integrate them.” 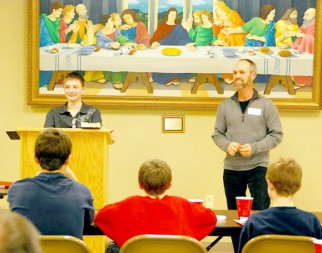 Jerry Steckler and son Isaac, play Father-Son charades at an event sponsored by Catholic Charities of the Diocese of Evansville.

Program teaches what it means to be a man with Christian values
By EMILY SNIPES (Catholic Charities)
Over eight years ago Catholic Charities implemented a Mother-Daughter program aimed at allowing an atmosphere for mothers and daughters to learn together about God’s plan for becoming a woman. Girls ages 9-12 learned about the changes that happen during puberty, the sacredness of human life, respect, virtues and responsibility. The Mother-Daughter presenting team consisted of Natural Family Planning teachers from the Holy Family Center for Life and was held each spring in Evansville and Jasper.

Once the Mother-Daughter program was established parents began asking when the Father-Son program would be implemented. In answer to a definite need in our diocese, two teams of men were gathered this year and organized with the leadership assistance of Mark Ginter, assistant professor of Moral Theology at St. Meinrad, to present the program.

Boys 11-14 years old attend the afternoon program with their fathers or other significant male role models and listen to presentations, participate in team-building activities and a question and answer panel. Topics for the Father-Son program include what it means to be a man with Christian values, God’s plan for us and our bodies preparing for fatherhood.

The Jasper area team presented the first Father-Son program on Feb. 28 at St. Peter Celestine; the Evansville area team will present their program on March 7 at the Catholic Center.

Each program takes a three-pronged approach — biological, psychological and spiritual — to introduce young men and women to teachings about chastity and sexuality.

The purpose of both programs is to provide an atmosphere of love and learning to discuss the important topic of growing up and to establish a foundation for continued communication between the parent and child. Presenters emphasize respect, understanding and appreciation for God’s gifts.

Diocese of Gary
For first time, church choirs ‘hear each other’
Story by Steve Euvino
SAINT JOHN — One choir member from the St. Cecilia Choral Festival commented afterward, “This is what heaven must sound like.” Some 150-160 voices came together Sunday, Feb. 28 at St. John the Evangelist for the first such combining of choirs.

Singing were choirs from the host parish, as well as St. Thomas More, Munster; St. Michael, Schererville; Ss. Peter and Paul, Merrillville; and Nativity of Our Savior, Portage.

Some of the choirs had as many as 40 members, while one choir had a dozen singers. Some choirs sang as their directors played the piano. Other choirs brought accompaniment, e.g., trumpets, drums, tambourines, cymbals, guitars, and flutes.

Choir members came to St. John the Evangelist the previous day for a 90-minute rehearsal of the final three songs. The concert was named for St. Cecilia, a first century martyr and the patroness of church music because of the “song in her heart” for the Lord.

Precious Blood Brother Terry Nufer, choir director at Nativity of Our Savior, said that for the first time “we really got to hear ourselves, and it was a wonderful thrill.” During the final three selections, Brother Terry and other Nativity members found themselves in middle of that larger body of the combined choirs. “All those voices surrounding us — it was a very special moment,” he said.

Archdiocese of Indianapolis
‘Race for Vocations’ expands to include Evansville Diocese
By Sean Gallagher
The “Race for Vocations” team started as a simple idea that Father Rick Nagel had a few years ago.

He thought that more people could become aware of the importance of vocations in the life of every person if a group of people promoted this idea by running in the annual One America 500 Festival Mini-Marathon and its accompanying Finish Line 500 Festival 5K, both held every May in Indianapolis.

The races’ participants would wear T-shirts that invited the thousands of people that ran and walked with them, and the thousands more that lined the race courses to believe that they, too, had a vocation.

That was Father Nagel’s idea three years ago. In 2008, there were 90 people on the “Race for Vocations” team. That number increased to more than 200 members in 2009 when the Lafayette Diocese started promoting the team.
This year, the Evansville Diocese has come on board, and Father Nagel hopes to see the team increase to more than 300 members.

Evansville seminarian Tyler Tenbarge, a sophomore at Bishop Simon Bruté College Seminary in Indianapolis, is excited about helping to promote the “Race for Vocations” team in his home diocese.

“There are a lot of good seeds [of vocations] out there that just haven’t quite broken through the ground yet,” said Tenbarge. “Knowing that [people from] our diocese are jumping in and going out of their way to come up to Indianapolis, which is a little bit out of our own territory, shows that we’re committed to the idea of vocations and helping people find their call.”

Father Alex Zenthoefer, vocations director for the Evansville Diocese, is pleased that three dioceses in Indiana are working together to promote vocations in an event like the Mini-Marathon, where tens of thousands of people come together.

The application was the follow-up step to the archdiocese’s announcement in December that it hopes to change the status of St. Anthony Catholic School and St. Andrew & St. Rita Catholic Academy to charter schools.

If approved, the two schools would still be managed by the archdiocese, but they would have to change their names, and they would no longer be able to promote the Catholic faith.

The full application will be reviewed by the charter school board. If approved, the City-County Council will consider the application.

“It’s a process,” said Connie Zittnan, the director of the Mother Theodore Catholic Academies for the archdiocese. “We will know whether we have it approved or not probably by mid-April.”

The two schools are among the six schools that form the Mother Theodore Catholic Academies—a consortium of schools dedicated to educating children in economically challenged, urban areas of Indianapolis.

The charter school proposal is designed to keep the two schools open in the face of financial challenges.

Hundreds of Scouts honored at religious emblems ceremony
By Brandon A. Evans
Hundreds of boys, girls, men and women—all involved in Scouting—gathered at SS. Peter and Paul Cathedral in Indianapolis on Feb. 28 to be honored for their dedication to the Catholic faith.

The annual religious emblems ceremony included songs, readings from Scripture, a homily, and the blessing and presentation of Scouting awards to those who have earned them during the last year.

The religious emblems, which vary from Boy Scouts to Girl Scouts, Cub Scouts and Webelos, honor hard work and the living of Catholic values.

This year is the 100th anniversary of the founding of the Boy Scouts of America.

Bishop Gerald A. Gettelfinger of the Diocese of Evansville presided over the ceremony, and also blessed the religious emblems and medals. The bishop is the episcopal liaison to the National Catholic Committee on Scouting.

“Bless these awards,” he said, his hands outstretched over a large table filled with cases and envelopes. “May they always be a sign of peoples’ striving to grow in faith. And may they represent our commitment to learn continually your divine truth and serve lovingly all your people.”

Before handing out the honors, Bishop Gettelfinger reflected on the Gospel reading for the event, which retold the parable of the faithful steward who, being given five talents, multiplied them for his master (Mt 25:14-30).
Through a series of questions and images, the bishop had the young people reflect on the five senses of sight, hearing, smell, taste and touch.

We are called not to abuse our senses, he said, but instead to make the most of them and enjoy them.
Photo caption: Parents and family members of Scouts being honored from Our Lady of the Greenwood Parish in Greenwood snap photos as Bishop Gerald A. Gettelfinger greets the Scouts. (Photo by Brandon A. Evans)

(For these stories and more news from the Archdiocese of Indianapolis, log on to the website of The Criterion at www.CriterionOnline.com)) †