For 11 years, Dr. Kevin and Cara Molyet longed for a place where students of faith at Trine University could feel supported. That dream has become a reality, and Bishop Kevin C. Rhoades traveled to Angola on Dec. 6, the feast of St. Nicholas, to bless a new, permanent home for the Catholic ministry.

Following a meal with students at the Newman Catholic Fellowship house, Bishop Rhoades commended the couple on their outreach and shared the story of St. Nicholas’ intervention in his own life. 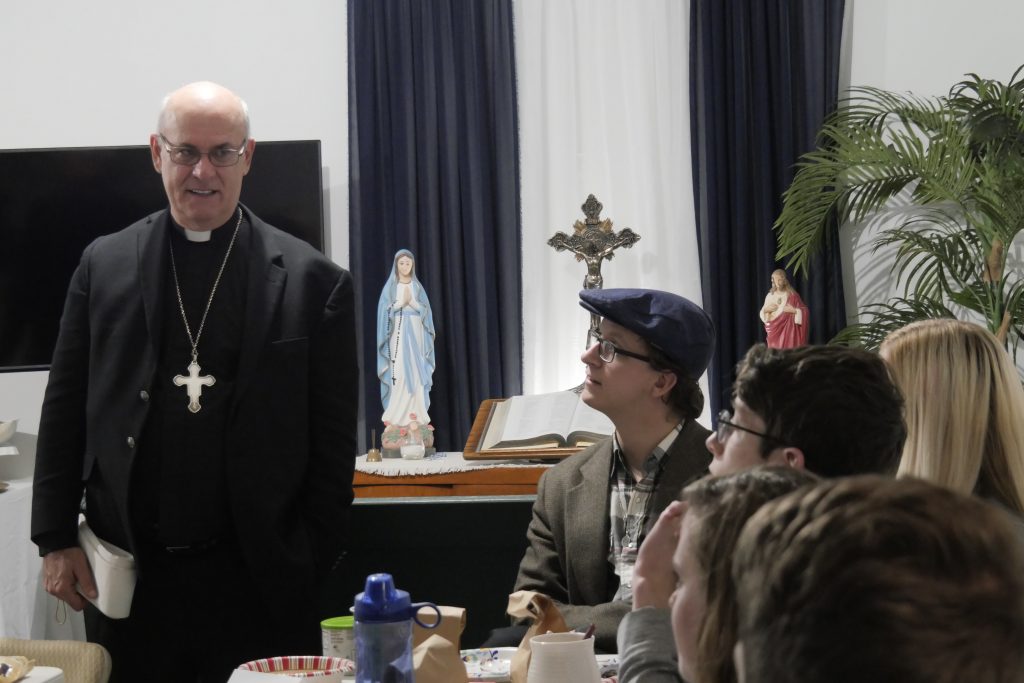 Photos by Jennifer Barton
Bishop Kevin C. Rhoades speaks with Catholic students at Trine University in Angola upon the blessing of their Newman Catholic Fellowship house Dec. 6, the feast of St. Nicholas.

As a seminarian, he had been sent to Rome to study and decided to visit Greece and then take a train trip through the continent with a friend. When the train stopped in Bari, Italy, he felt a spiritual nudging to go and pray at the tomb of St. Nicholas, even though that meant they would have to stay overnight in the town and finish the journey on a different train. He and his friend learned the next day that a terrorist attack had killed 85 people on the train they deboarded.

“I often say St. Nicholas saved my life,” he told the students, stating that each year on Dec. 6 he thanks both God and St. Nicholas and prays for the victims of the attack.

In remarks prior to blessing the house and the students, Bishop Rhoades expressed hope that the presence of the Newman house will aid them in not only maintaining and growing in their Catholic faith, but in spreading it to others at the university. “Here on the campus of Trine University, you’re being witnesses to Christ on campus,” he told them.

He noted that the mysteries of the Catholic faith “are so great, so profound, we can continue to grow in our knowledge of our faith with the help of the Holy Spirit,” and concluded by stating that the best form of evangelization is to live the Christian life through their actions. 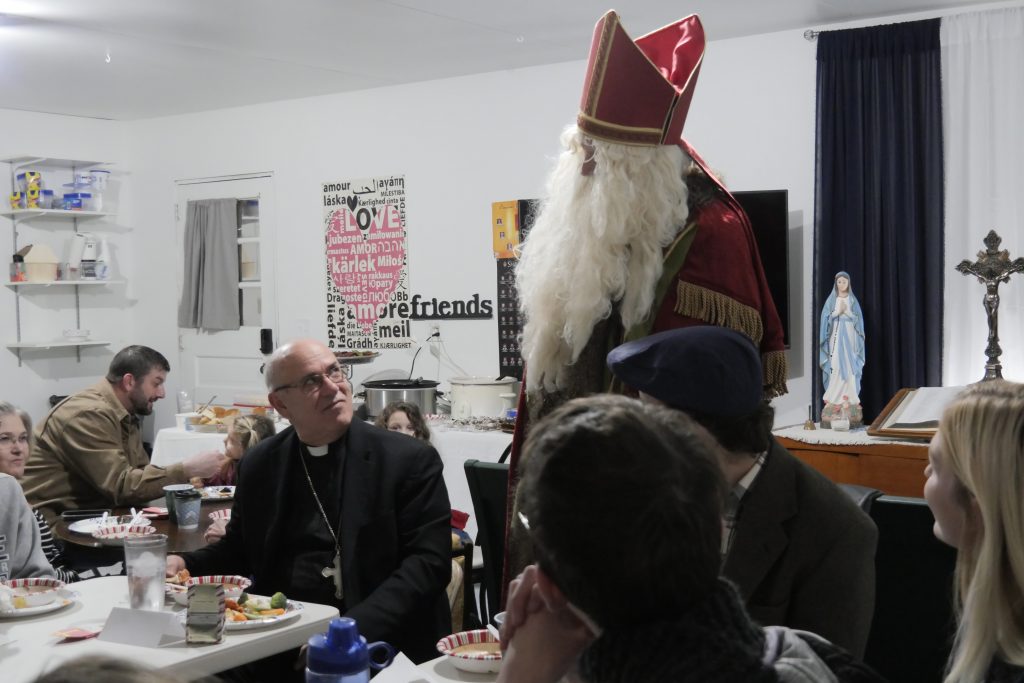 Two bishops in one place – jolly old St. Nicholas made a visit to the Newman Fellowship house, bearing gifts for the students and even some special treats for Bishop Rhoades.

The house on Elizabeth Street is two and a half blocks from campus and is of some historic interest, Cara noted.

“It was one of the postwar National Homes, built in Lafayette, Indiana, and put together on site for $3,500. It was kind of an erector set house, designed to help veterans and their families get on their feet after World War II,” she said. The three bedrooms of the home are rented out to students, and two public rooms — one for meetings or prayer and one for games — are accessible by all Newman Catholic Fellowship club members.

The Molyets were able to purchase the home in December from a friend who knew the couple had been praying for a permanent location for the club. Previously, club members and their advisor, Kevin — an associate professor in design engineering technology at the university — met in whatever room they were given to meet, based on availability. “So, they were transient in that respect,” Cara said. An off-campus student tragedy last year added urgency to the goal of finding a regular meeting place.

Shortly after opening the Newman Catholic Fellowship house in October, Cara and Kevin received confirmation that the large step forward they had taken in the ministry has God’s blessing. The diocesan Youth and Young Adult Ministry gifted them 15 Bibles for students to use, a gift they could not have accepted prior to having the home. “We could never own something before, because we had no place to store it,” Cara explained. 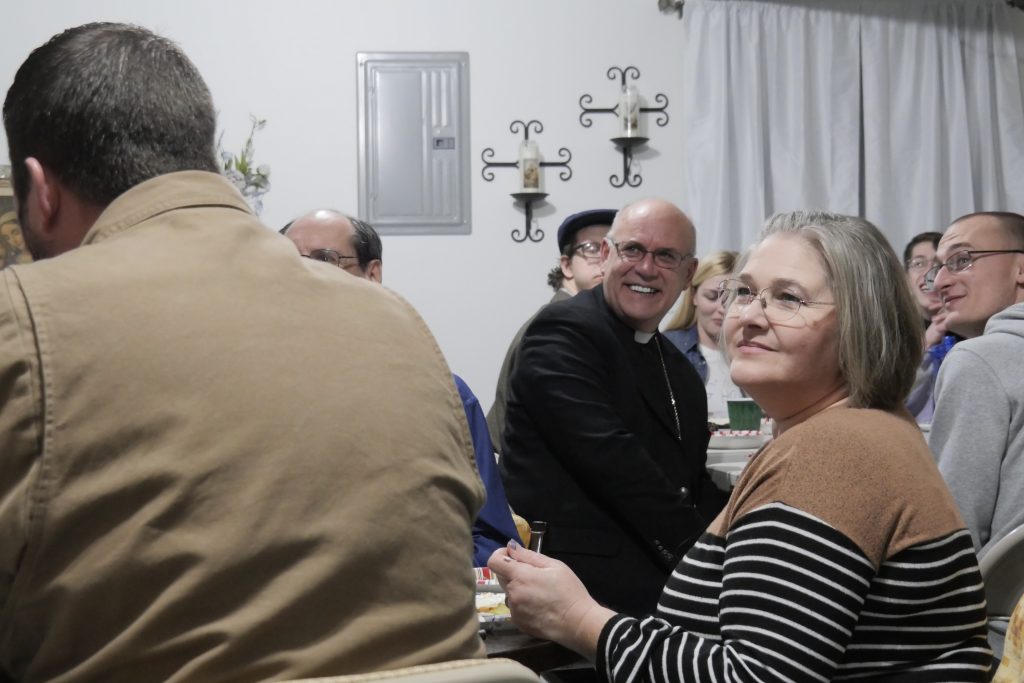 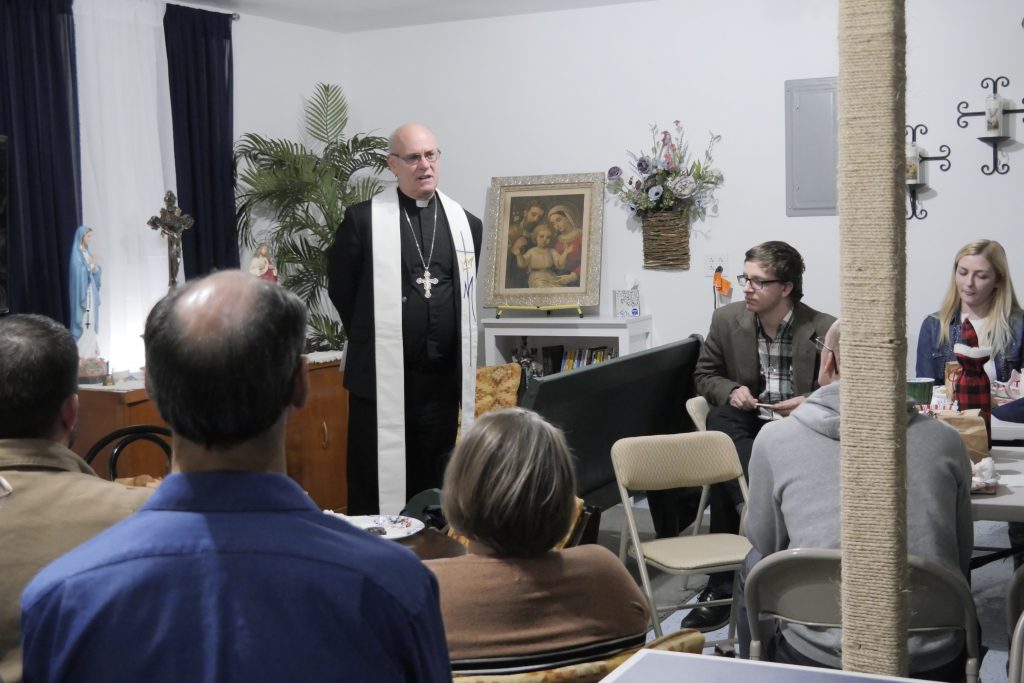 The Molyets and members of the club cleaned up the home’s yard, prepared the bedrooms so that boarders would help offset its cost and renovated the attached garage into a meeting and prayer space. The first boarder moved into the house in May.

The ministry formed a 501c3 in October and established a board of directors over what had previously been Cara and Kevin’s presence and catechesis with Trine Catholics and other students of faith.

“My husband and I have a very strong passion for the students,” Cara said. “If we can at least help create a positive influence, and have them exposed to that, we’ve done what we think we had to do. We really want them to feel like their friends are here.”

That message appears to be getting through. Even before there was a permanent location, graduating seniors who spent time together at Trine Newman Catholic Fellowship were forming long-term relationships and even returning to campus together from time to time.

Club members come together to eat on Mondays, followed by a Bible study and social time on alternating weeks, according to Cara. The group takes on service projects together, including leaf raking this fall and an Epiphany party in January when items are collected for a local crisis pregnancy center.

Although the ministry is associated with both St. Michael Parish in Waterloo and St. Anthony of Padua Parish in Angola, the Molyets welcome students of all faiths. Around 10-15 participate in events regularly, and another 10 or so are on a mailing list.

“It’s small, but with a permanent location we hope it will grow,” said Cara. “The house is a nice get away from campus, a place where we support their faith. It’s their own house.”

Jennifer Barton contributed to this article.