Historic St. Mary’s City, a living history museum in southern Maryland, keeps the story of those Catholic colonists alive, while its archaeologists are still digging up clues to the past.

In 1634, the ships the Ark and the Dove landed on the shores of Maryland carrying more than 100 English Catholics and Protestants, led by the Catholic Leonard Calvert. The newcomers settled in a fort before gradually building up St. Mary’s City, a metropolis in southern Maryland that would serve as the colony’s first capital.

For decades, religious tolerance for Christians was the law of the land. But the colonists weren’t free of the political and religious strife that rocked society in Europe. In the late 1680s, England’s Glorious Revolution replaced a Catholic ruler with the staunchly Protestant King William and Queen Mary. Soon, Maryland was no longer controlled by the Catholic Calvert family but instead became a royal colony where the Church of England was the state religion. 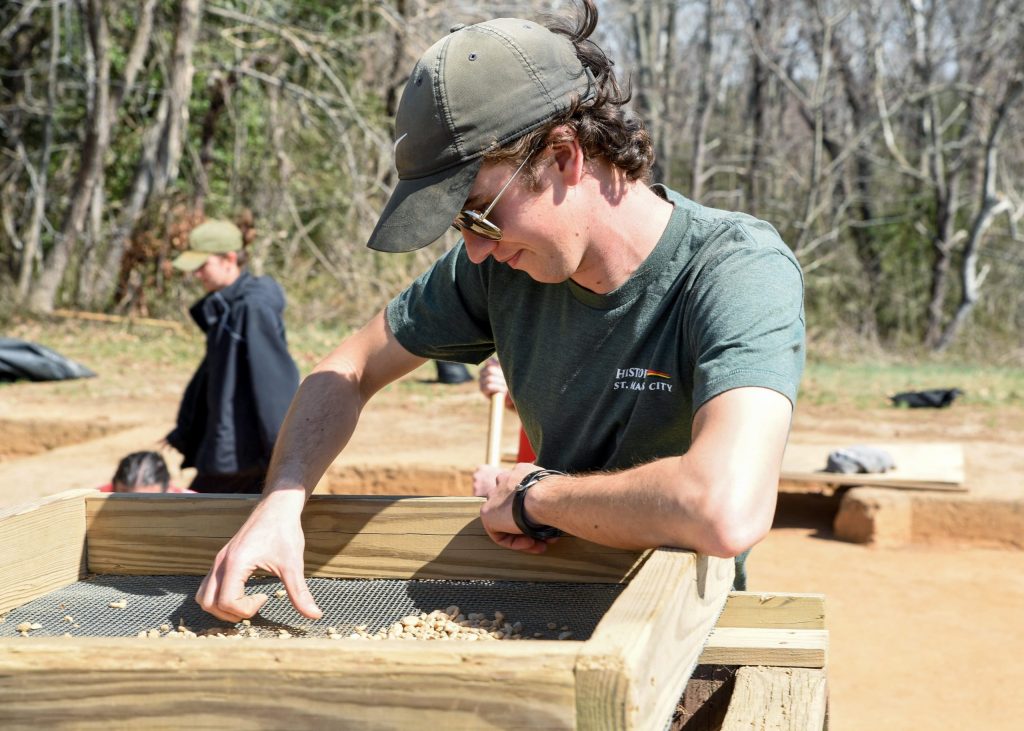 In 1695, Francis Nicholson, the royal governor, moved the capital to Annapolis, a more centrally located city where fewer Catholics lived. St. Mary’s City became a shell of its former self, and the site of that original fort was lost to history.

Fortunately, archaeology has helped uncover much of the old city’s mysteries over the past few decades. “There was no map of St. Mary’s City, other than one map with no street layouts, no buildings, no nothing,” said Peter Friesen, Director of Education at the living history museum. “It’s through the 50 years of archaeology that we were able to figure out where a lot of these buildings are that we’ve reconstructed.”

One of those buildings is a Catholic church. The first group of colonists to come to Maryland included Jesuit Fathers Andrew White and John Altham, and other priests followed over the years. At first, they used an old witchott, a type of Native American dwelling, to celebrate Mass, then a wooden chapel, then a cruciform brick chapel with windows and a stone floor. But the building survived for only a few decades.

In 1704, the Maryland legislature passed the “Act to Prevent the Growth of Popery,” which banned Catholics from voting or holding office, taxed them twice and only allowed them to worship in their homes.

The St. Mary’s City sheriff locked the brick chapel so that it could no longer be used for worship. “Then the Jesuits (took) the chapel apart brick by brick and used the bricks to rebuild a different chapel on private property that they owned at St. Inigoes, which is five, six miles south of (St. Mary’s City) and is now part of a (military) base,” said Friesen.

To replace the loss of churches, Catholics began to add “Mass rooms” to their homes, and several are still in existence, including one at the Doughoregan Manor near Ellicott City. 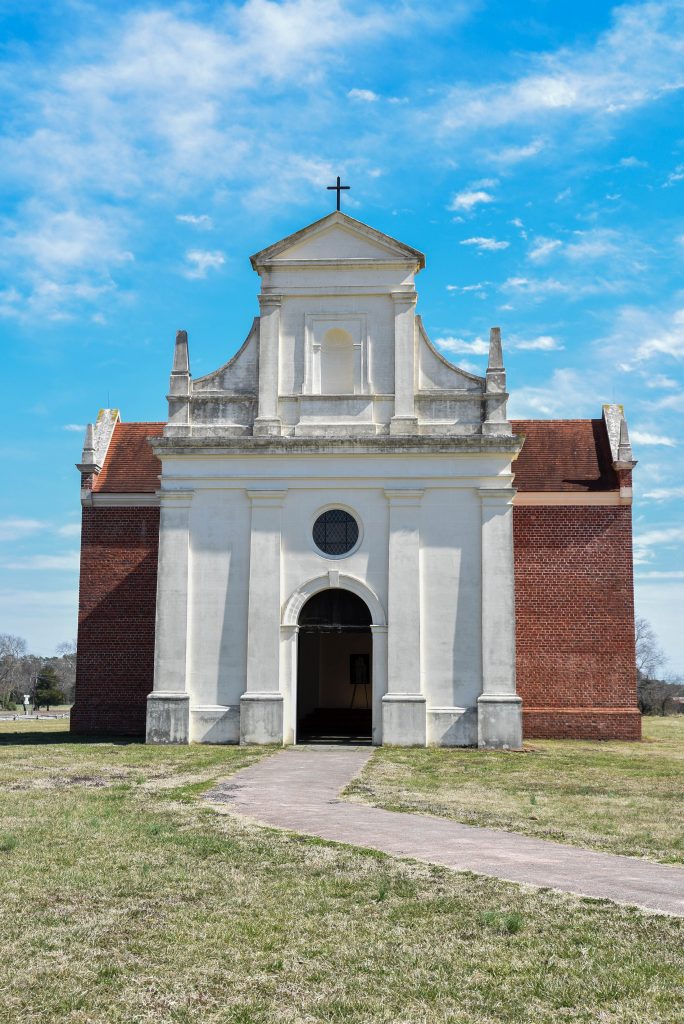 The foundation of the original brick chapel was discovered in 1938 and more than 50 years later was extensively excavated by archaeologists. The chapel was rebuilt in the style of other Jesuit churches of the time.

Though the historians were learning more about the colonial town, one thing remained elusive: the location of the original fort.

Their more than 50-year search often was sidetracked by other discoveries, such as the uncovering of three lead coffins buried in one of the transepts of the brick chapel. But last year, Historic St. Mary’s City announced they had finally found the fort after a geophysicist used magnetometry, ground-penetrating radar and other technology to identify the post holes of the fort’s walls. Excavation has helped them learn more about life inside the fort, and has uncovered Catholic artifacts.

A silver crucifix, rosary beads and a medal of Aloysius Gonzaga, a future Jesuit saint, were all discovered at Historic St. Mary’s. Two identical medals were found, one inside the fort, of five saints who were canonized by Pope Gregory XV in 1622: St. Ignatius Loyola, St. Francis Xavier, St. Teresa of Avila, St. Philip Neri and St. Isidore the Farmer, who stands in the center holding a farming tool.

“Medals like this were becoming very popular in the 17th century as a consequence of multiple things,” said Jennifer Ogborne, curator of collections. “People wanted items of devotion they could carry with them as part of the Counter-Reformation. It became much easier to make them in the late 16th and early 17th centuries so they could be produced for a wider audience.”

One of the latest discoveries from the fort site is a small metal Caravaca cross. For centuries, pilgrims have visited the Spanish town of Caravaca to venerate a piece of the true cross. The relic is displayed in a cross with two horizontal bars, and the artifact has the same shape. There is still plenty to learn about the tiny devotional object that was plucked from the Maryland dirt, said Ogborne. “We are very excited about that cross.”

Historic St. Mary’s City explores more than just religious history. Visitors can see a tobacco farm, a replica of the Dove, the ship that brought the colonists, and models of period Native American homes.

But for Catholics and other people of faith, St. Mary’s City is notable for its radical commitment to religious tolerance. The ideals the early colonists espoused lived on. Within 100 years of Maryland’s legal penalization of Catholics, the First Amendment enshrined freedom of religion as a fundamental American right.

Maraist is a staff writer at the Arlington Catholic Herald, newspaper of the Diocese of Arlington.