MISHAWAKA — With large spacious windows, generously sized bathrooms, flat screen televisions, bamboo doors, a large atrium with an ATM and a sizable dining facility with a walkout terrace, a picture of a luxury hotel comes to mind.

Instead, these areas all can be found in the new Saint Joseph Regional Medical Center (SJRMC) in Mishawaka. With 254 private rooms, the 658,000-square foot facility was designed with input from doctors, nurses and caregivers before construction began in March 2007.

Mike Stack, public relations manager for SJRMC, says that everything in the new hospital is designed for the safety and comfort of the patient. The windows in the patient’s rooms are 20 percent larger than in the old facility in South Bend. Other large windows adorn each floor of the facility to promote a soothing transition in the healing process.

Each patient room is 289 square feet and has a 32-inch high definition flat screen television. Patient privacy is factored into the room layout, Stack notes. “The curtain track is a lot further away from the bed because the room does not want to create a feeling of being claustrophobic. The beds are situated when you walk in the corridor so you can’t see the patient’s head.”

The large bathrooms are handicap accessible with a shower and can accommodate wheelchairs and patients hooked up to IV’s. With a decrease of space from the bed to the bathroom, there is less chance of slipping and falling.

“We understand that no one wants to be sick and be in the hospital so we tried to make something as close to home as possible. We also wanted to make the care as safe and efficient as possible,” Stack emphasizes.

The emotional recovery for patients and their families has also been addressed at the new hospital. Immediate family members may visit the patient 24 hours a day. In addition to the hospital’s new chapel, chaplains are available around the clock for prayer with the patients and their families.
“Saint Joseph has always prided itself on being the hospital with a compassionate component to it. On the fifth and sixth floors we have rooms that are called patient family suites with fold out couches. On the one side it is set up like a regular patient room but adjoined to that is a suite where basically it serves multi-purposes,” he notes.

“If a dignitary stayed in town their staff could have a suite area. Or if we have a terminally ill patient and the family wants to be around at all times they can certainly be in there.” 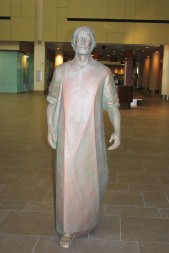 A statue of St. Joseph is situated by the main guest elevators.

SJRMC will continue its tradition of providing health care for all, regardless of the ability to pay, as set by the Sisters of the Holy Cross in 1883.
In addition to patient needs, the hospital was designed to be more efficient for the healthcare providers. Each room is designated as same handed, a John Hopkins protocol, that rather than having left and right mirrored rooms, all patient rooms are identical.

The sink is on the left in each room. According to Stack, the first thing a caregiver does is wash their hands and go to the bedside to work with the patient. “The concept is that standardization and repetition decreases the chance for error. That way the caregiver, when they go from one room to another, does not have to reacclimatize themselves,” he says.

Higher ceilings throughout the hospital keep the patient from feeling enclosed and keep doctors who work in oncology, orthopedics and cardiology from hitting their heads on overhead equipment during surgery.

The new hospital takes pride in its emphasis on its green guideline to healthcare, Stack stresses. “The bamboo doors throughout the hospital are very durable but can be replaced easily. We also recycle 80 percent of construction waste, which includes wood, steel and concrete.”

The first floor’s amenities include a large windowed atrium, a business center and a credit union. The main dining room has a walkout terrace for dining, and wireless Internet access is available throughout the building.

With the continued influx of the aging baby boomer generation, SJRMC can evaluate the need for additional patient rooms in the future.
“About 85 percent of the outside of the building is brick, but on the southwest corner of the facility near the emergency room there is material that is easier to remove for future expansion of another patient tower. We have made sure we left a footprint there for the future.”