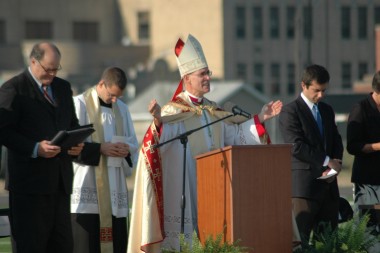 Bishop Kevin C. Rhoades offers a blessing during the dedication ceremony of the new Saint Joseph High School. At right is Mayor Pete Buttigieg, mayor of South Bend and Saint Joseph alum. At left is Father Terrence Coonan, chaplain for the school.

From the 50-yard line on Father Bly Field, Bishop Kevin C. Rhoades blessed all those in attendance, those who worked on the construction, the new building and the field itself.

“Today, we will invoke God’s blessing on this new high school, named in honor of the holy carpenter of Nazareth, St. Joseph, the earthly father of Jesus, our Divine Teacher,” said Bishop Rhoades as he addressed those gathered in the bleachers. “In this new high school, for many years to come, our young people will pursue human learning and culture and will learn the truth of the Gospel and how to live it in their daily lives.”

Principal Susan Richter, a member of the Saint Joe family as a teacher and administrator for 17 years, recalled the day Bishop Rhoades gave his approval to go ahead with the capital campaign and to begin construction on the new school.

“I came to this site in the early evening and stood at the top of the hill, just off of Cedar Street, and looked out over this huge property and excavated dirt, a blank canvas, and I was truly overwhelmed,” Richter said. “Overwhelmed with the amazing opportunity we’d been given, the limitless possibilities in our future and the incredible challenges that lay ahead of us. It was a powerfully emotional day and moment.”

“Only a mother’s love could endure to complete such a project while meeting a full high school academic calendar and schedule,” smiled Myers as the crowd applauded. “Thank you, Susan, for your faithfulness, your devotion and your maternal love for the faith community of Saint Joseph.”

One of Saint Joseph High School’s better-known alums is Pete Buttigieg, mayor of South Bend.  He welcomed his alma mater on behalf of the city, noting, for the first time since South Bend Central High School closed its doors in 1968, the city again has a high school located downtown.

“It means a great deal to be here as an alumnus and to see what has been built for the next generation of students,” said Buttigieg, before expressing some other concerns. “I do worry a little that future students will miss out on the bragging rights that come from literally sweating out their exams in the absence of air conditioning … or from studying the Eisenhower administration while sitting in desks that actually date back to the Eisenhower administration!”

Ken Kaniewski sat in those desks during the Eisenhower era, as a member of the first class to attend the original Saint Joseph’s High School for all four years. His children are also Saint Joseph graduates, and now granddaughter Makenna Kaniewski is a member of the first class that will attend all four years in the new Saint Joseph High School. A successful area businessman, Kaniewski says he values the quality education he received in high school.

“We were always rated No. 1 in the city and that meant an awful lot to me, to my parents and my grandparents who were very proud of me, just as I’m proud of my granddaughter,” said Kaniewski. “She’ll be in the first four-year graduating class just like her grandpa was. It means a lot to me.”

Kaniewski says he appreciates the modern building and the technology students will now enjoy.

“It’s all in their grasp,” said Kaniewski, looking out the library windows to the computer screens in the student commons. “Everything is here for them to take advantage of — a great education to prepare for life. Saint Joe is a place to get a quality education and set the groundwork, and it’s all up to the individual after that.”

When asked if the new building will take away from the character built by the old Saint Joseph traditions, students and parents appear to be on the same page.

“I don’t think the essence of Saint Joe really changes at all,” said Judy Madden, mother of three boys currently attending the high school. “We send our kids here to get a Catholic education in mind, heart, spirit and body. The new building was made possible by the people in the old building, so we come here to honor them and carry on the tradition.”

“Saint Joe is more than a building,” agreed Matthew Madden, a junior. “Saint Joe is like a family; everyone is so close. All the teachers really care and want you to succeed.”

Michael Madden, a senior, says he’s looking forward to starting some new traditions and marking milestones in the new building.

“It’s special,” he grinned. “Family is the most important thing here, probably more important than tradition, knowing you’ll be together forever.”

During the open house following the dedication ceremony, Bishop Rhoades blessed each classroom, office and athletic facility in the new building. With the help of school chaplain Father Terry Coonan, holy water was sprinkled everywhere as photos were snapped and happy crowds toured the school from top to bottom.

The chapel is the last of the project that remains under construction as it awaits its stained glass windows and other finishing touches. Carmen Watkins, mother of one current student and several graduates, spent many hours in the old chapel praying for members of the Saint Joseph family. She looks forward to praying in the new chapel.

“I always loved the thought of having the Blessed Sacrament present to all the kids at the high school,” explained Watkins, “and I think that resonates throughout the building.”

As people mingled in the main gym, talk turned to sports and the excitement surrounding the new stadium. When the football team takes the field Sept. 7 against Elkhart Central, it will mark the first time the Indians play a true home game.

Named for a Saint Joseph legend, Father Walter Bly, the new field means a lot to alums like Terry Healy who played football for Coach Bly in 1974.

A humble man, Father Bly is retired but still celebrates Mass for the football team on Friday nights. He doesn’t see why people are making such a fuss over the field named for him.

“I’m sure the students will love it,” he admitted, “and the football players will love it. My name is very small and it should be put in small places, like on the back of some tree. But a lot of people put a lot of time and effort into this field … God bless ‘em!”

Even as people lingered in the building, faculty and staff members prepared for student orientation Aug. 28 and the first day of school Aug. 30.

“The halls of Saint Joe will be filled with our students,” smiled Richter, “breathing the life, heart and soul into this school. Students, faculty and staff will embark on another year of fulfilling our mission, transforming our students in heart and mind to serve God, the Church and the world in this beautiful new facility. That will never change … we are truly blessed.”