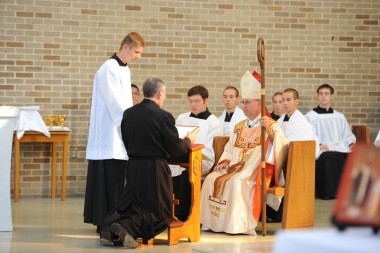 NOTRE DAME — Holy Cross Brother John R. Paige was inaugurated on Sept. 23 as the fourth president of Holy Cross College. Founded in 1966 by the Brothers of Holy Cross, the college has grown from a two-year college to a four-year liberal arts college with 500 students.

Brother John began his duties as college president in January, but he was formally installed in the 2 p.m. Friday ceremony in the college’s Pfeil Center. The formal installation was preceded by a special Mass at 10 a.m. in St. Joseph Chapel, with Bishop Kevin C. Rhoades of the Diocese of Fort Wayne-South Bend as the main celebrant. Holy Cross Father Richard V. Warner, superior general of the Congregation of Holy Cross, was the homilist, and 31 Holy Cross priests concelebrated the Mass. The large chapel was nearly filled by the college’s friends, students, faculty, benefactors, and Holy Cross brothers and sisters.

During the Mass, Brother John and the entire Holy Cross theology faculty entered the sanctuary and recited the Profession of Faith. Brother John then recited and signed the Oath of Fidelity before Bishop Rhoades.

In an interview prior to the inauguration, Brother John told Today’s Catholic that canon law requires anyone who takes over responsibility of an apostolate in the name of the Church to make an Oath of Fidelity and Profession of Faith in front of the bishop, and this is oftentimes done in private.

“Since the bishop would be presiding at our inauguration Mass, and the superior general of the Congregation of Holy Cross would be the homilist, I said to the bishop: ‘Wouldn’t it be nice if I made my public Profession of Faith and the Oath of Fidelity during that Mass?’” Brother John explained.

When the theology faculty learned of Brother John’s plan, they asked to join him in making their Profession of Faith as teachers of the sacred disciplines.

“We wanted to do it publicly to affirm to the bishop and to our own constituents that this is not something done reluctantly,” Brother John said. “We are doing this willingly, and we want to make it public because we cherish our Catholic identity and our relationship with the diocese.”

Indeed, Catholic identity was the first value Brother John mentioned when Today’s Catholic asked him about his plans and hopes for Holy Cross College. The Catholic identity is already “alive and vibrant” on the campus, he said, and “That is something I certainly want to maintain and celebrate.”

Brother John also is determined to continue what Holy Cross refers to as its four pillars. He said that Holy Cross has a relatively focused curriculum that he calls “the practical liberal arts,” because to graduate, every student must: 1) be involved in a professional internship; 2) do service learning in teams; 3) take part in a global experience either domestically or with Holy Cross missionaries overseas; and 4) do a “capstone” presentation that articulates the student’s experience at Holy Cross and details how that experience will enable the student to benefit the world and others.

“Those are the basic things I want to continue because I believe they are a unique niche for us in higher education, and the size of our school-about 500-allows us to do that,” Brother John said.

As for the future, Brother John plans to build on the college’s ability to reach out to the local area. One way to do that, he said, is through partnerships. Since the college shares a campus with Holy Cross Village — a continuing care community for elders — he said the opportunities to have inter-generational learning are very possible and quite relevant.

Thus, the college will be teaming with other local institutions in the “Gerontology Consortium of Michiana.” Working with St. Joseph Regional Medical Center, the college will be the academic provider to train “senior service navigators” from area agencies, who can then help seniors navigate the complex system of services available to them.

In the area of facilities, Brother John said that Holy Cross College is working with the diocese to purchase back some “patrimonial land” that had been bought by the diocese for athletic fields for Saint Joseph’s High School. The high school won’t need that land after its new campus is completed. Initial plans are to use the land for parking and athletic fields for Holy Cross College, though further physical development of facilities is a possibility, Brother John said.

As for the student body, which Brother John describes as “wonderful,” he noted that about half of the students are from Indiana or Michigan, and the other half are international or from other states. About half the students live on campus.

Brother John would like to attract even more local students to enjoy the benefits of a college community that is small, enabling students to know each other and take classes from real professors who know students by name. At the same time, Holy Cross students can participate in the many student activities at the University of Notre Dame and Saint Mary’s College.

As part of the inauguration festivities, Holy Cross College celebrated 170 years of service in America by the Brothers of Holy Cross with a symposium Sept. 22 entitled “A Desire to Correspond with the Designs of God; Being and Doing Brotherhood for the 21st Century.”