“Retirement” is not in Father Bernard Ramenaden’s vocabulary, but “returning” is. 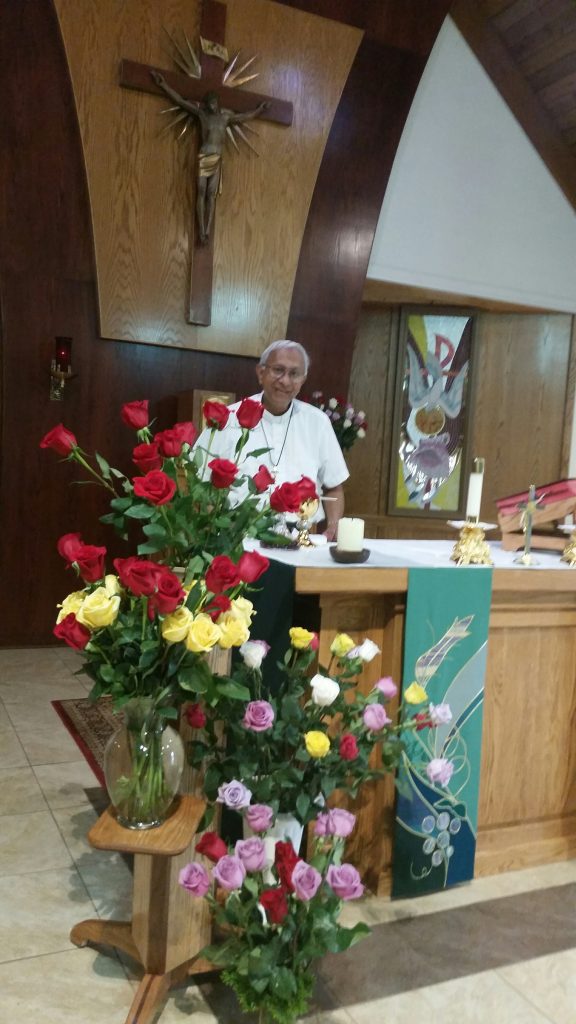 Father Bernard Ramenaden, OSB, has served as pastor of St. Gaspar del Bufalo Parish in Rome City, for 11 years. He returns to his native Sri Lanka in June to open a prayer center for priests.

The Benedictine priest and monk, who has been pastor of St. Gaspar del Bufalo Parish in Rome City for 11 years, returns this summer to his native Sri Lanka and to a new ministry. Father Ramenaden will open a prayer center for priests.

More than 150 friends and parishioners celebrated Father Ramenaden’s tenure as pastor at St. Gaspar with a catered dinner in the church hall following the 4:30 Saturday vigil Mass on May 18, according to longtime parishioner Mary Arend.

“We wanted to celebrate the contributions he has made as pastor,” she said, citing the many improvements to the church and surrounding property, including the cemetery that sits across the fields of Noble County near Our Lady, Mother of Mercy Center at Kneipp Springs.

Arend told the story of how Father Ramenaden became pastor of the country parish under the guidance of the late Bishop John M. D’Arcy. The Missionaries of the Precious Blood, who had staffed the parish since its founding in 1957, felt they could no longer provide a priest, so a new pastor would need to be found for the active parish.

“I called Bishop D’Arcy and begged for a priest,” she recalled. His answer was that he regretted he had no priest to send.

“But a month later, I saw him at a diocesan event, and as soon as he saw me, he said, ‘Mary I have a priest for you!’” Father Ramenaden was serving at St. Elizabeth Ann Seton Parish in Fort Wayne and was willing to move to Rome City.

Born into a family of five children in Colombo, Sri Lanka, both he and his brother, the late Father Ronald Ramenaden, served in the Diocese of Fort Wayne-South Bend. Father Bernard entered the Benedictine community in 1966 in Sri Lanka and was ordained a priest monk in 1975.

Before coming to Fort Wayne in 2005, he spent four years as formation master of professed monks in Sri Lanka and served as the Abbot General’s procurator and councilor in Rome.

She said he makes certain that there are fresh flowers in the sanctuary every weekend, and that the overflow seating in the church’s hall, adjacent to the sanctuary, is available throughout the year, not just during the summer when lake residents pack the church.

“People always comment that they feel welcome, because the seating is always ready no matter the season,” she said. “Benedictines are known for their hospitality, and he takes that seriously.”

Father Bernard also has devoted himself to adult faith formation at the parish, leading Scripture studies and discussion groups on weekends and after weekday Masses.

He said his life as a pastor has been devoted to “being of service and being available to minister to parishioners’ needs.”