SILVER SPRING, Md. (CNS) — Many people might not have noticed that Anna Gallagher took over Feb. 1 as executive director of the Catholic Legal Immigration Network, known as CLINIC.

If they hadn’t, they certainly would have March 8, when she called a Department of Homeland Security decision to not redesignate Temporary Protected Status for those fleeing war- and corruption-scarred South Sudan “morally reprehensible.”

“Well, it was,” she declared during a March 27 interview with Catholic News Service at CLINIC headquarters in the Washington suburb of Silver Spring. 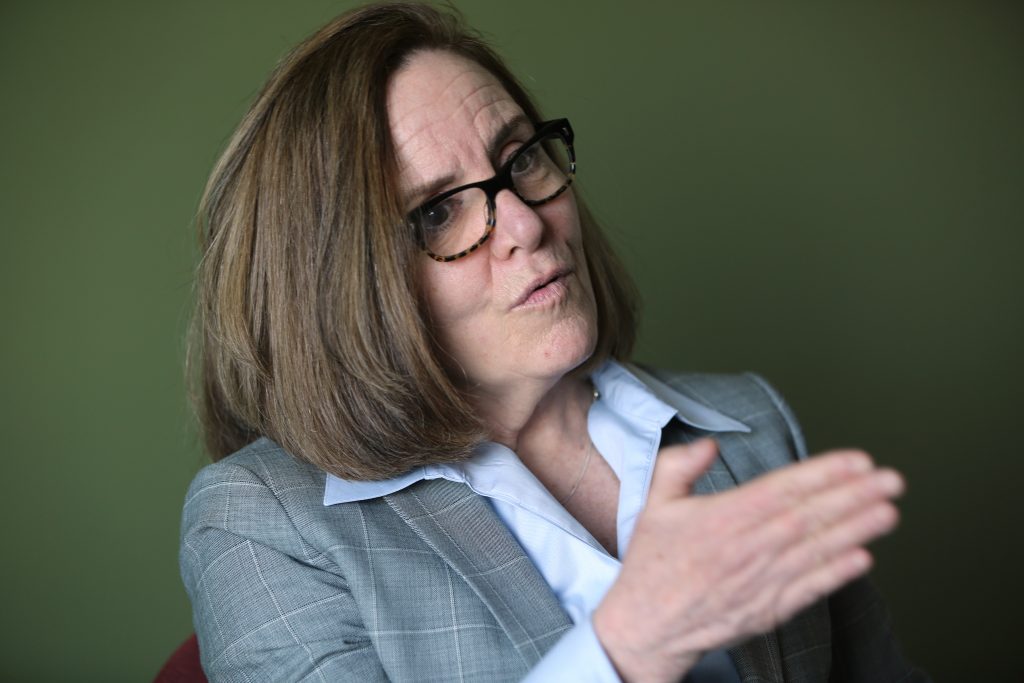 Gallagher, 60, is herself the child of immigrants from Ireland. “They didn’t have a sponsor, because you didn’t need one back then,” she said. “When my parents came to the United States, the immigration system was more welcoming. They simply had to submit proof that they would not be a burden to the country and were granted immigrant visas. Things are much different today.”

Raised in Philadelphia, she got a bachelor’s degree in political science and Latin American studies from Temple University in 1984. She earned her law degree at the Antioch School of Law in Washington three years later, and dove right into immigration law work — as well other matters — in the wake of the Immigration Reform and Control Act, which had become law in 1986.

She moved to Guatemala City in 1992 to take a job as deputy director for the Center for Human Rights Legal Action, known by its Spanish acronym as CALDH, which investigated many high-profile cases.”I investigated the Dianna Ortiz case,” Gallagher said, referring to the case of the U.S. Ursuline nun who was ministering in Guatemala when she was kidnapped, jailed, tortured and raped in 1989. CALDH also investigated the case of Jennifer Harbury, a U.S. human rights lawyer and activist whose husband, a Mayan guerrilla leader in Guatemala, was “disappeared” and later murdered.

“I also came back with a child from Guatemala,” Gallagher said. While she was there, she adopted an 11-year-old boy who had been placed in an orphanage by his caretaking older sister, who had become sick and could no longer care for him.

“He would come by, looking for something, a little money, a little something to eat. I made him a sandwich. I told him I wasn’t going to give him anything else until he started to learn English,” she said. “He returned for visits and I began to teach him English. After meeting his extended family, we agreed that I would care for him and my husband and I adopted him.”

Even with Guatemala’s civil war having ended two decades ago, “the government’s as corrupt as it’s ever been,” she told CNS. Combined with gangs and a three-year drought, Guatemalans are leaving their homeland in greater numbers than ever.

As they journey northward, some Mexican gangs find more profit in kidnapping migrants than in trafficking drugs, Gallagher said. The gangs kidnap and hold refugees until their U.S.-based kin pay ransom. She added women traveling alone, and even with their children, are often subject to sexual assault.

Despite the deprivation and depravity they’ve suffered, they are often reluctant to tell an immigration judge those details. When asked why they came to the United States, they tell the judge, “I want a better life,” which judges interpret as, “Oh, they’re just here to make money,” Gallagher said.

She vigorously disputes the notion put forth by the federal government that the border situation is at a crisis. On March 27, the same day Gallagher was interviewed by CNS, The Washington Post published an interview Kevin McAleenan, the U.S. Customs and Border Protection commissioner, who said the U.S. immigration enforcement system along the Mexican border was at “the breaking point.”

Immigration judges, she said, would appreciate more lawyers representing immigrants: “They can get the initial master calendar hearings done in five minutes. They know the procedure.” A judge having to explain each step of a hearing and the reason behind each question being asked to an unrepresented immigrant can easily take 15 minutes, thus creating bottlenecks in the system.

“People who leave their homes are very desperate,” Gallagher said of immigrants. “But they are also very brave.”

In her career, she has represented many seeking asylum. “Winning asylum for a client is a bittersweet victory,” Gallagher said. “Of course, I’m happy that the individual is safe. However, it is bittersweet because she has lost her country and her country has lost a brave and resilient citizen.”