NEW ALBANY, Ind. — The stained-glass window stands in the area where it was installed in Holy Trinity Church in New Albany in 1890. It still radiates the sunlight, creating a kaleidoscope of green, red, orange, and yellow. It still welcomes all who come, whether to rejoice or to sit in peaceful silence. Yet the 132-year-old window hasn’t seen the light of day since 1975, when a devastating fire destroyed Holy Trinity Church.

The restored window was unveiled atop a metal, church doorframe-like structure, along with a nearby sculpture called “When I Was Hungry and Thirsty”, as the new entryway to Holy Trinity Heritage Park in October.

“This entrance way is all we had hoped it would be,” said Mark Casper, Agency Director for St. Elizabeth Catholic Charities (SECC) in New Albany, during the unveiling ceremony. “We are excited to share this with all our community.”

The entryway and sculpture are the agency’s latest efforts in enhancing the former Holy Trinity Parish’s property, which it was gifted in 2011. 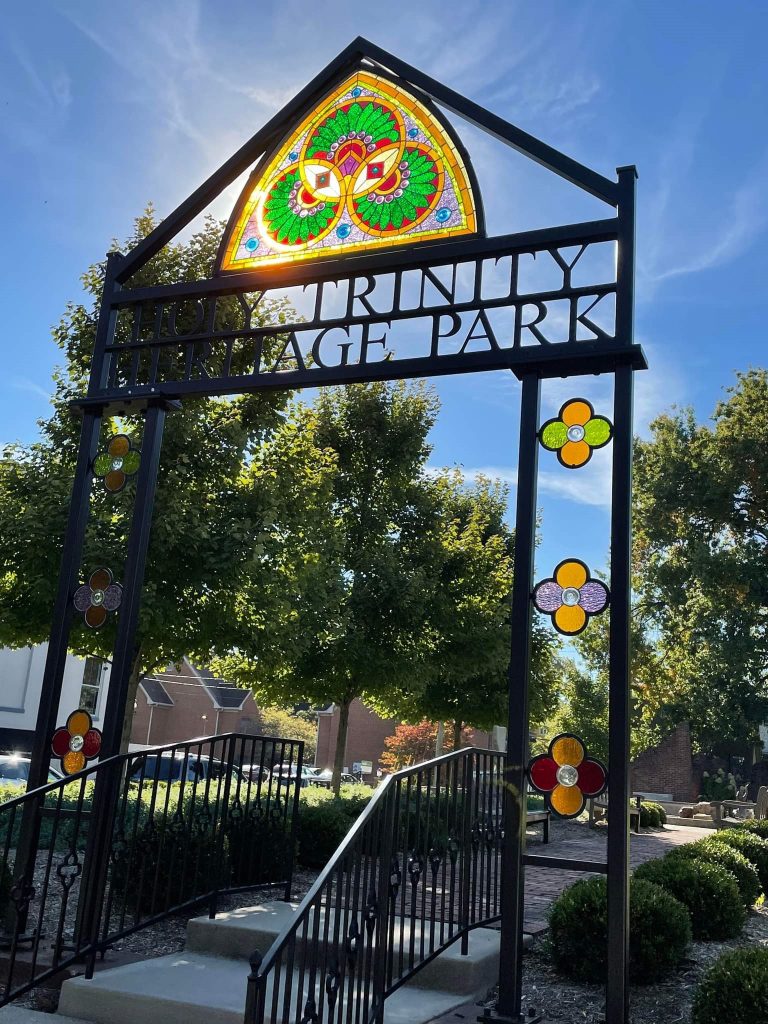 Upon receiving the property and former parish rectory, the first line of business was restoring the 1850 rectory for use as SECC’s headquarters, Casper told The Criterion, newspaper of the Archdiocese of Indianapolis.

That task was completed in 2013. Next, SECC began a project to turn the former church grounds next to the former rectory into a community park. “New Albany doesn’t have many green spaces,” said Casper. “We envisioned a place where kids could run around or people could sit in a peaceful surrounding.”

Preparation for the project included a trip to Indianapolis to research the former parish and church at the archdiocesan archives. “We were shocked to learn that some of the windows had survived and were stored just a few blocks away [from the soon-to-be park] at St. Mary’s Parish in New Albany, Casper recalled. After the fire, Holy Trinity Parish was merged into St. Mary.

“When I finally saw them, they were terribly dirty,” he said. “They were still covered in soot from fire.”

Once assured that the surviving windows would be used to honor Holy Trinity Parish, the parish gifted them to SECC.

Casper consulted with Donna Baldacci, who with her husband Kirk Richmond owns the Stained Glass Gallery in New Albany. “She knows everything about windows — where the glass came from, what each piece was worth,” he said. Baldacci was surprised by the find.

“I almost cried when I saw the windows,” she said. “The fact that any windows survived the heat of that fire is a miracle.” She and her husband were so moved by the project, they offset most of the cost.

The first phase of Holy Trinity Heritage Park was completed in 2017. It included some of the smaller restored windows that had once graced the church. But the large window that had crowned one of the front-side entrances of the church required much more work.

“She said it would take about two years to restore it,” said Casper. 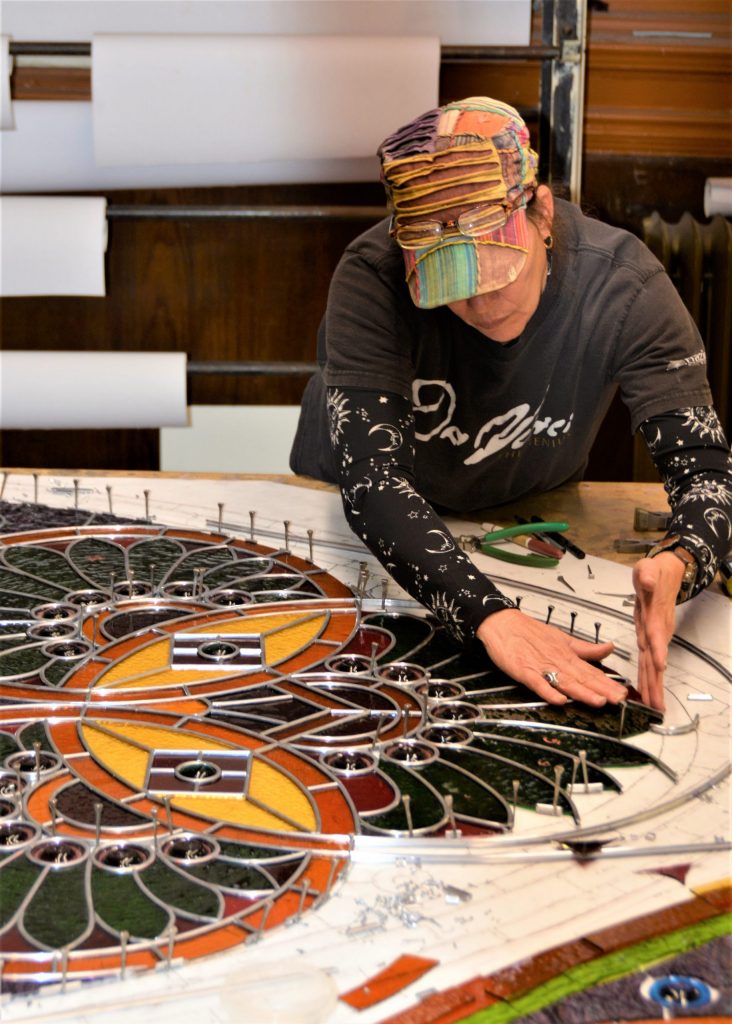 ‘A Labor of Love’

About 40 percent of the pieces did have to be replaced, said Baldacci. She identified the glass as having come from the Kokomo Opalescent Glass company, which was able to produce exact replicas of the type and color of glass used in the original window.

The window was taken apart … each piece soaked in water for four weeks to loosen the soot and grime. Then the “jewel-toned colors and design came through,” said Baldacci, explaining that the three conjoined rings represent the Holy Trinity. “It was just stunning.”

The window was then reassembled and re-leaded, soldered, glazed for weatherproofing, then “laboriously, meticulously” cleaned again. It was then sent to Louisville to be encased in a wooden frame with tempered glass for protection from the elements.

“It should be another 80 to 100 years before it will need to be restored again,” said Baldacci.

Once framed, the window was sent to Heck Metal Works, owned by members of St. Mary of the Knobs Parish in Floyd County. “We wanted something that would make it look like you were walking into the church,” Casper explained.

Creating the 11-feet by 14-feet entryway frame for the window “was a labor of love,” said Ben Heck, Owner of Heck Metal Works. After “thinking and praying about it,” he decided to do the project as a donation to SECC. “We’ve been fortunate over the years,” he said. “We’ve seen the good works that St. Elizabeth does, and we’ve benefited from their good works. This was a way to give back to an organization that has given so much to us and the community.”

Bare Metal Inc., in New Albany and Koetter Construction in Floyds Knobs also contributed to the project. “It seems it does take a village,” Casper noted at the unveiling. “We are blessed to be part of such a giving and caring community.”

‘Passionately Speaks to Our Mission’

The park’s new entryway structure honors Holy Trinity Church — the first Catholic church built in New Albany. But Casper also wanted a “signature piece of art” to honor the works and mission of St. Elizabeth Catholic Charities. “When we were discerning what that piece would be, we wanted something … that it would be interactive,” he explained. “And we wanted it out front so the community could see it and touch it.”

That vision was realized with the unveiling of the sculpture “When I Was Hungry and Thirsty.”

Made possible with the help of generous donors, the piece was created by Canadian sculptor Matthew P. Schmalz. According to his website, his work can be found in cathedrals and churches around the world, including in Rome and at the Vatican.

“Our hope is that [this piece] brings poverty to the front [of people’s minds] and reminds us that we are all called to do ‘for the least of my brothers,’” Casper said at the unveiling. “We feel blessed to have this piece that so passionately speaks to our mission.”

It took more than two years for the new entryway and sculpture projects to come to fruition. But Casper noted at the unveiling ceremony that “great art takes time, and patience is a virtue.”

He extended an invitation for all “to stop by and spend some time in Holy Trinity Heritage Park. As the [hymn] says, ‘all are welcome in this place.’”