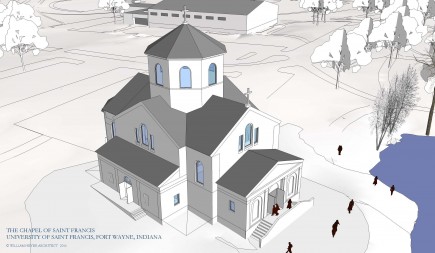 A new, larger campus chapel is part of the University of Saint Francis’ Faith and Reason Campaign. It will serve as the emblem of the school’s Catholic mission and identity.

A new free-standing chapel, “the crowning jewel of the campus,” will soon be constructed at the University of Saint Francis, Fort Wayne, said Sister Elise Kriss, OSF, president. “It has been a long time in coming, and we hope that by this time next year it will be close to completion.”

“The free-standing chapel will, of course, be a more visible sign of the Catholic identity of the University of Saint Francis,” she continued. It will be located on the campus’ east side, between Pope John Paul Academic Center and Achatz Hall of Science. When the city zoning board gives its approval, the 7,000-square foot structure will tower 90 feet above ground level.

“Its size and location, with the cross at the top, will make it the highest point on the campus and the center of campus life, said Sister Elise. “It will represent in a very visible way the ‘dialogue between faith and reason, so that it can be seen more profoundly how faith and reason bear harmonious witness to the unity of all truth’” (Ex corde Ecclesiae, #17). In fact, the fundraising campaign for the chapel and the Achatz Hall expansion is appropriately called the Faith and Reason Campaign.

According to Dr. Matt Smith, vice-president of institutional advancement, the original campus plan included a free-standing chapel; but that part of the plan was never implemented. Now that project is finally underway and, upon university board approval, will begin next spring. The Faith and Reason Campaign hopes to raise $22 million, with $4 million slated for the chapel — the “faith” portion of the campaign — and $18 million intended to renovate and expand the Achatz science building, the “reason” portion of the campaign.

“We are in the design and fundraising stage,” said Smith. Currently, two volunteer committees are hard at work on the dual fundraising effort, and he noted that “significant progress has been made.” In addition, a chapel planning committee consisting of university and diocesan representatives, including Sister Angela Mellady, OSF, Provincial of the Sisters of Saint Francis of Perpetual Adoration in Mishawaka, is in discussion with Bill Heyer, liturgical architect with Design Collaborative, on design details for the chapel. “This will allow us to do more for students in terms of their spiritual direction,” said Smith.

Sister Elise has high expectations for the proposed 250-seat chapel’s role in campus life as well. With its location on a path between two major academic buildings, and an attached adoration chapel that will be open longer hours than the main chapel, it is expected to draw students and staff to prayer. And with a newly instituted Sacred Time from 11:30 a.m. to noon on weekdays when no classes or meetings are scheduled on campus, visits to the chapel are expected to increase. Daily Mass will be offered there at 11:30 a.m. and Sunday Mass for students will be offered at 9 p.m.

The current chapel located in Trinity Hall seats only 100 and is filled to capacity, especially on Sunday evenings, so a new chapel will be a blessing in many ways.  Additionally, the university will continue to originate the Sunday morning televised Mass for the broader Catholic community, an important service to those who are homebound and unable to attend their parish church. “We are grateful to partner with the diocese for this,” added Smith.

The president’s hope for the future is that more Catholic students will join the campus community. “We are still primarily a commuter campus, with about 350 resident students of our total enrollment of 2,200 students,” she pointed out.  About 30 percent are Catholic, a general reflection of the religious traditions of the community at large. “We are also a campus that has a great opportunity for evangelization of all our students, no matter their religious preference or upbringing. The unmistakable presence of the new stand-alone chapel will help us fulfill our task as a Catholic university,” Sister Elise added.

Scott Opperman, director of campus ministry, echoed her sentiments. “Given the visibility and location of the new chapel, I also think more students and employees will participate in Mass during Sacred Time on weekdays. We have already seen increases this year; it will greatly increase with the new chapel.”

“Having the chapel come to the students, faculty and staff on the east side of campus where they spend the academic day will present an invitation to all to spend some of that time with the Lord.”

Sister Elise believes the possibilities are unlimited. “It remains to be seen what other opportunities the new chapel will open us up to in order to better serve our students and help us live out another characteristic of a Catholic university, which is to bring ‘a Christian inspiration not only of individuals but of the university community as such.’” (Ex corde Ecclesiae, #13)

One of the Franciscan values on which the University of Saint Francis is founded is to encourage a trustful, prayerful community of learners. A new chapel as a beacon to its Catholic identity will surely exemplify that value.