The power of prayer — even prayer for oneself — has been strengthened anew in Father Robert Van Kempen in recent months after the news came that the beloved priest needs a kidney transplant.

He shared that he has been diabetic since 1997, and over the years that disease has taken its toll on his kidneys. “It wasn’t until last year that it came to a head,” he said. 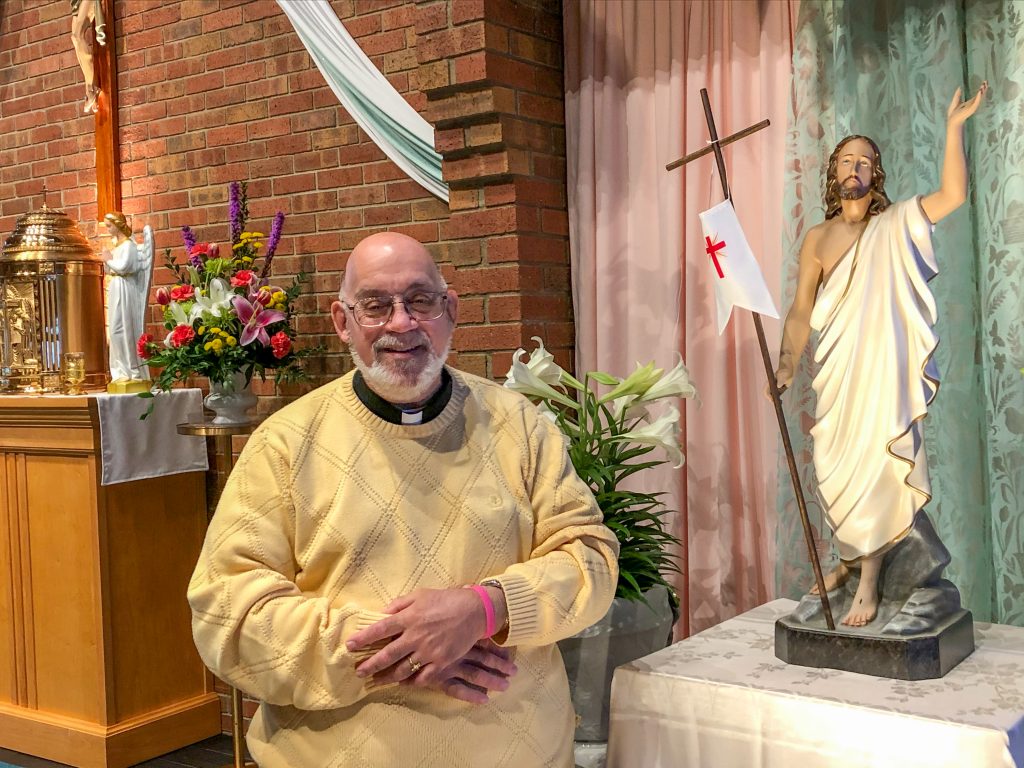 Denise Fedorow
Father Robert Van Kempen of St. Mary of the Annunciation Parish, Bristol, is in need of a kidney donor. Despite his illness and during the trying time of pandemic, he has seen his faith grow.

Father Van Kempen had knee surgery in 2016. Last year, he had surgery on the second knee. Apparently because of the anesthesia and painkillers, his kidneys started to shut down. A few days after the second surgery, he said he was feeling “pretty loopy and confused” and went back to Saint Joseph Regional Medical Center Hospital in Mishawaka. It was discovered his kidneys were shutting down and weren’t processing the post-surgery medications: They were all staying in his system, causing his symptoms. He was in the hospital for several days.

He admitted that dialysis was something he didn’t want to do. Before the surgeries, he had been going to a kidney doctor every few months and when the suggestion had come that one day he might need dialysis, he didn’t want it. He thought that maybe he would have no choice by the time he was 75 or 80, but not in his early 60s.

The doctor and his sister made the decision for him while he was in the hospital. Father Van Kempen admitted thinking, “Oh Lord, now I know you’re testing me!” But, he said, “They made a good decision.”

Father Van Kempen went three days a week to the DaVita Mishawaka Dialysis Center near Saint Joseph hospital for four hours a day from September until March. Now he’s able to do dialysis at home, which is easier, but he needs to be on it for nine hours a night. He said he connects to the dialysis machine around 9 or 9:30 p.m. and remains on it until 6:30 a.m.

“It was challenging at first, but I’ve gotten used to it,” he said.

Once his kidney specialist advised a kidney transplant was necessary, he had to go through a barrage of tests. “Your body has to be strong enough to accept the kidney,” he explained.

A physical showed his prostrate was enlarged and he had to undergo a heart catherization.

“That’s when my life really changed,” Father Van Kempen said. “I never really prayed for myself. I prayed every day but for everyone else, not myself.”

But he admitted he was getting tired. The pandemic had been hard on him, so he turned to God and prayed that his tests would come out OK so the doctors could move forward. It turned out the prostrate was fine, and the heart catherization found his heart was very strong.

“I thanked the Lord a lot! The power of prayer is really amazing,” he said. “This reiterated that for me.”

“I’ve always been more of a private person in my prayer life — not ‘standing on the corner’ as they say, but with the pandemic we lost so much. I lost interactions with parishioners at Mass, interactions with staff, and it drained me. I didn’t have the connections I normally have,” he shared. “That was reflected in my prayer life — it changed and got kind of dry,” he said.

But one morning it hit him that he’d been in a dark place for a while. “I realized I need to stop it. I have to be positive and upbeat — it’s been a good change in my life and has helped me deal with the pandemic and life in general.”

He said he realized that he preached to his congregation that every morning when they get up in the morning, they should thank God, thank Him for the day. “So if I preach this, why aren’t I living it?”

He said he knew no one wants to be around someone who is ‘woe is me’ so even when you’re not feeling good, if you say that you are, it helps.

He admitted he was getting a little depressed seeing all the doctors he was seeing. “It was tiresome, and I had to call a priest to cover daily Mass three days a week because my dialysis was 6:30-10:30 a.m. I decided to be joyful, positive and allow the Holy Spirit to come dwell with me,” he said.

“I started praying for myself; started giving everything over to the Lord. With the prostrate and heart coming out perfectly it really renewed my belief in the power of prayer,” he said. “I said, ‘Lord, whatever you plan, I’m here and I accept it. If I get a kidney, that’d be great — if I don’t, I’ll continue dialysis. But I trust the Lord will get me a kidney.”

“Faith and trust in God. You’d think being a priest I’d have that anyway but sometimes even we doubt,” he admitted.

Father Van Kempen has had a lot of people praying for him, too. The Sisters of St. Francis of Perpetual Adoration, his brother priests and people everywhere have told him they’re praying for him.

“The number of cards I get from parishioners and friends saying they’re praying for me has been very powerful,” he said. “The bishop sent a note with a holy card of St. Benedict — the patron saint of kidney disease that was very special. It all adds up.”

He also really appreciated Father Henry at Saint Joseph Regional Medical Center Hospital. “He came every day to bring me Communion. With COVID, we couldn’t have visitors but he was there every day. That means a lot to me, that he came every day bringing me my Jesus.”

Now, Father Van Kempen said he’s “feeling great, — I got my energy back, my attitude has changed.”

Father Van Kempen said he now has a whole team of medical professionals working with him. Aside from his kidney specialist, there’s a dietician, social worker, nurses and residents in training. Two nurses are on call 24/7 if he has any questions. He sees his doctor once a month and can call her anytime.

He has a new phone so they can call him if they have a cadaver donor: He’ll only have five to six hours to get to the transplant hospital and the drive is three hours long. If there’s a living donor, that surgery would be scheduled. He’s on the donor list for both.

He said now that he is on the list, he should soon be starting a new medication to stop the body from rejecting a new kidney. The medications need to be started before the transplant.

If someone is considering becoming a live donor for Father Van Kempen, he said they can go online and answer the questions.

Father Van Kempen wants Today’s Catholic readers to know he’s looking for a kidney donor and would greatly appreciate someone considering being one.

“But more importantly, I want them to know to remain strong in your faith no matter what comes your way, God’s there. I’ve really come to realize He’s there to carry us when we can’t go on,” he said.

“Depend on your faith, grow in faith and trust in Him.”

If someone feels God is calling them to be a living kidney donor for Father Van Kempen, they can visit iuhealth.org/transplant. Click on “living kidney donor” and read through the donor education booklet. There’s also a short video. Fill out the donor evaluation form or call 800-382-4602.