Inside the city’s convention center, however, it seemed as if the pure joy and enthusiasm of 20,000 people — mostly high school youths — would have held off the damp chill even if the building hadn’t.

But in a heartbeat, the crowd went from rowdy to reverent. They knelt in silence as a eucharistic procession twined through the Indiana Convention Center, the Eucharist held aloft in a monstrance carried by Indianapolis Archbishop Charles C. Thompson.

These joyful, worshipping people hailed from 145 dioceses around the country — and even from Australia, Canada and England. They came to participate in the largest biennial Catholic youth gathering in the United States: the National Catholic Youth Conference, or NCYC, held this year from Nov. 21-23.

The theme this year was “Blessed. Broken. Given.” To explore the theme and to encourage youths to read the Scripture daily, four general sessions held in Lucas Oil Stadium across from the convention center dove into the story of the Road to Emmaus (Lk 24:13-35) during the course of the conference. 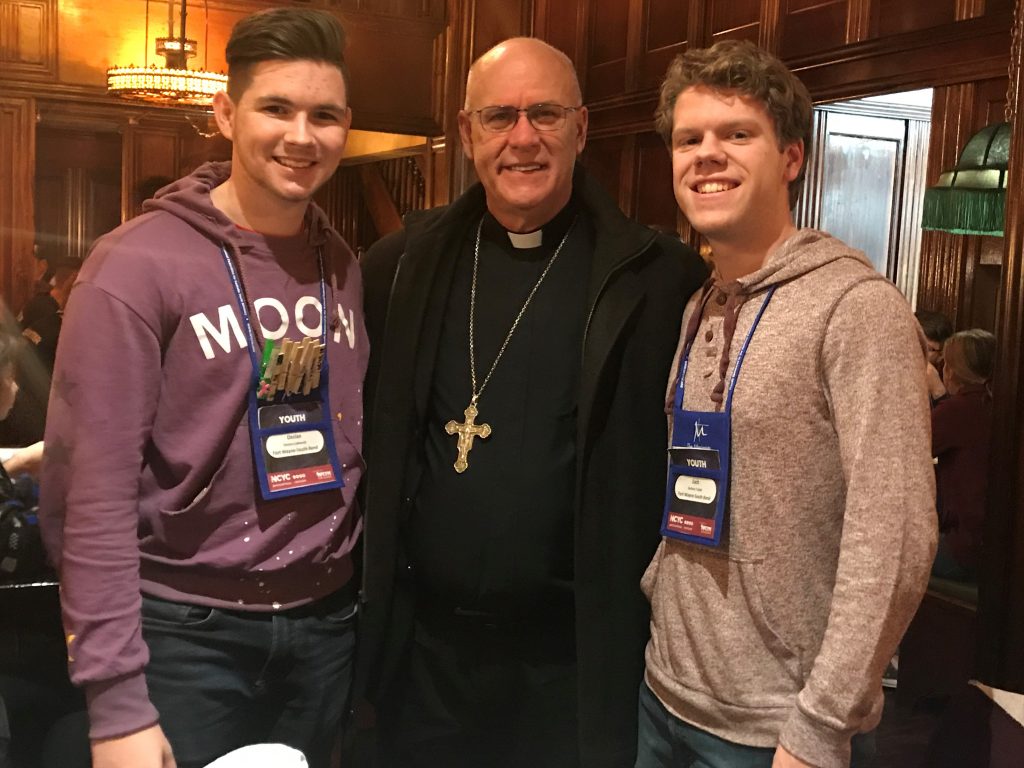 At the opening general session on a chilly night, the youths first warmed up with the musical praise of the band For King and Country.

The sound level and energy were high. But when the 20,000 participants tilted their heads up to watch a videotaped welcome, the sound turned from dull roar to deafening.

As with the eucharistic procession, the youths’ shouts turned to silence as Pope Francis read his message.

“I send you an affectionate greeting and my prayers at this moment of encounter that you are living,” he said, occasionally lifting his eyes from a transcript to the camera. “May it be an opportunity to deepen your faith and communion. May it light your missionary hearts with the courage and strength to live in and with the Lord, always as a Church sent forth.

“Go and fill your surroundings, even the digital ones. Not of convictions,” Pope Francis said, setting his paper down and speaking off-script directly to the youths. “Not to convince others. Not to proselytize. But to bear witness of the tenderness and mercy of Jesus.” 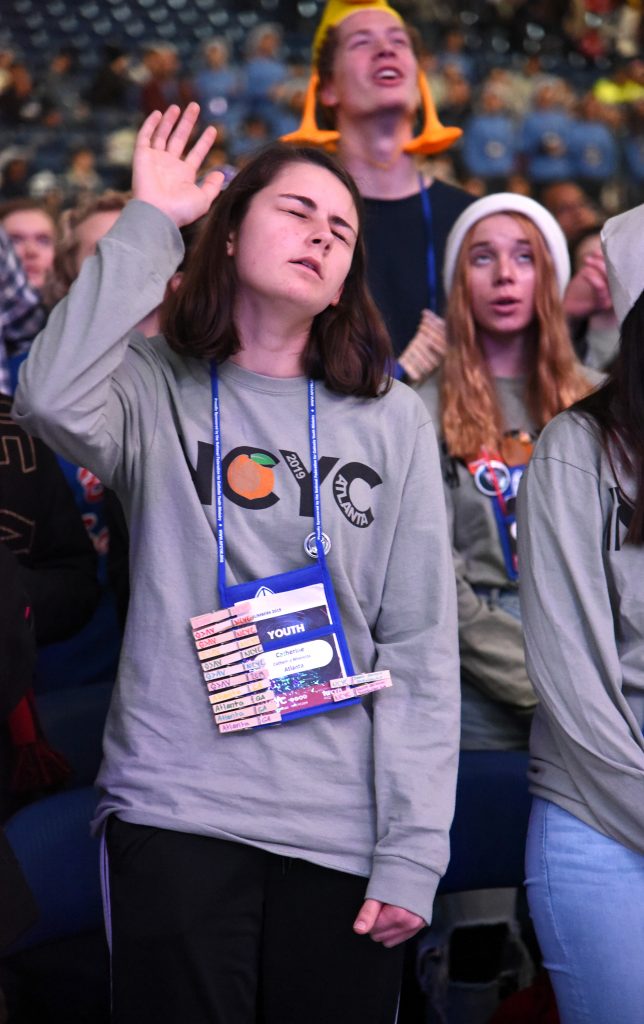 Catherine Mistretta of the Archdiocese of Atlanta prays during a song Nov. 22, 2019, at Lucas Oil Stadium in Indianapolis during the National Catholic Youth Conference, which drew 20,000 people, mostly high school youths from across the country. (CNS photo/Sean Gallagher, The Criterion)

He closed his message by blessing the participants with the sign of the cross. “And don’t forget to pray for me,” he added.

Moments later, the darkness of the stadium was broken as one ambassador from each delegation present streamed into the arena, each carrying a candle.

With the area encircled in candlelight, several singers dressed in choir robes ascended the stage and chanted the Emmaus story from the Gospel of Luke.

From the stage, Cleveland Bishop Nelson J. Perez reflected on the reading.

“This Gospel that you just heard sung to you today tells a story that is actually being lived out in these days,” he began. “We’ve been on the road to get (to NCYC). Some have flown, some have driven long hours.”

“As you came here … in your mind you were already thinking of things going on in your life,” he added, much like the two disciples traveling to Emmaus. “In these days, Jesus, through His word and His abiding presence in the Eucharist, begins to walk with you.” 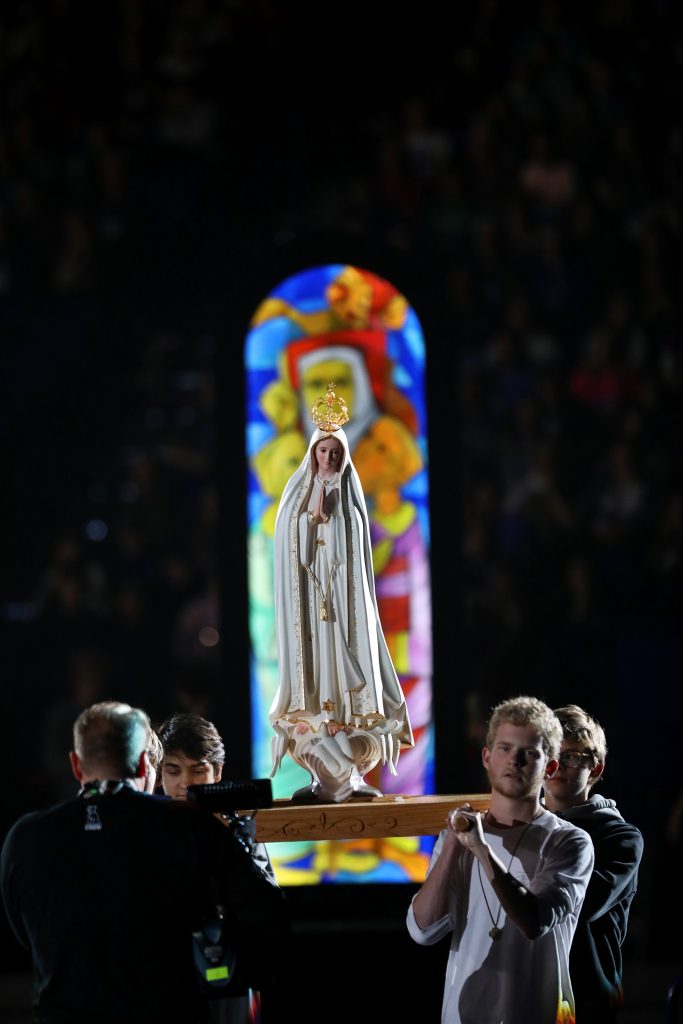 Youth carry a statue of Our Lady of Fatima into Lucas Oil Stadium Nov. 21, 2019, at the opening general session of the National Catholic Youth Conference in Indianapolis. About 20,000 youth gathered for the conference, which is organized by the National Federation for Catholic Youth Ministry with the help of the Indianapolis Archdiocese as the host. (CNS photo/Karen Bonar, The Register) See stories marked NCYC- Nov. 22, 2019.

He encouraged the youths to consider how they would respond if Christ asked them these questions.

“You might say, ‘Well, Lord, don’t you know everything? You know what’s going on,’” said the bishop. “But He wants to hear it from you. So talk to Him these days, before His presence in the Blessed Sacrament, in moments of prayer.”

Bishop Perez told the young people they would be hearing many inspiring speakers in the following days.

“God will speak to you through the word, but also through their words,” he said. “Listen, because God has something powerful and beautiful to tell you.”

Participants were asked to bring a Bible to each of the general sessions.

“All of you who pledge to read the Bible every day, stay standing … and raise your Bibles high,” said author and international speaker Katie Prejean McGrady, one of the evening’s emcees.

“Today, as in the beginning, we need to go out to meet each person,” said the Holy Father in his recorded message. “It is our mission to do so, especially with those most separated and those who are suffering most.”

Bishop Perez shared a quote from the pontiff’s March 25 postsynodal apostolic exhortation “Christus Vivit” (“Christ Lives”), primarily addressed to young people: “Young people are taking to the streets. … You are the ones that hold the future. Through you the future enters the world. I ask you to be protagonists of this transformation.”

As he spoke, all lights in the stadium were on the stage, leaving the seating sections in a shroud of darkness. So Bishop Perez asked each of those present to take out their cellphones and turn on the phones’ flashlight.

Suddenly the rest of the stadium became like a night sky pierced by thousands of points of light.

In a tone that seemed to embrace each youth, Bishop Perez noted that many today say “young people are losing their faith. … (But) I look at all of you, and I (say) to myself, ‘They’re wrong.’

“Look around you — they’re wrong!”