INDIANAPOLIS — As part of a continuing effort to strengthen its commitment to protecting minors and vulnerable adults, Catholic dioceses in the United States have established a third-party reporting system to receive allegations of sexual abuse, sexual misconduct and cover-up of abuse by bishops.

People can call a toll-free hotline at (800) 276-1562 to submit a complaint or make a report on-line at ReportBishopAbuse.org.

The Catholic Bishop Abuse Reporting Service was created in response to Pope Francis’ call for “public, stable and easily accessible systems” for global reporting of abuse allegation in his apostolic letter ‘Vos estis lux mundi’ (‘You are the light of the world’), which he issued on May 7, 2019. That document mandated every Catholic diocese in the world to create procedures for such reporting by June 1, 2020.

The requirements put forth in “Vos estis lux mundi” do not replace systems already in place in every diocese and archdiocese in the United States for reporting abuse by clergy, religious and Church employees or volunteers. The new third-party reporting system has been created to specifically address sexual abuse, sexual misconduct and cover-up of complaints involving bishops and general superiors of religious orders.

The Catholic Bishop Abuse Reporting service allows for individuals to relay to Church authorities any reports of U.S. Catholic bishops who have:

• forced someone to perform or to submit to sexual acts through violence, threat, or abuse of authority;

• performed sexual acts with a minor or a vulnerable person;

• produced, exhibited, possessed, or distributed child pornography, or recruited or induced a minor or a vulnerable person to participate in pornographic exhibitions; 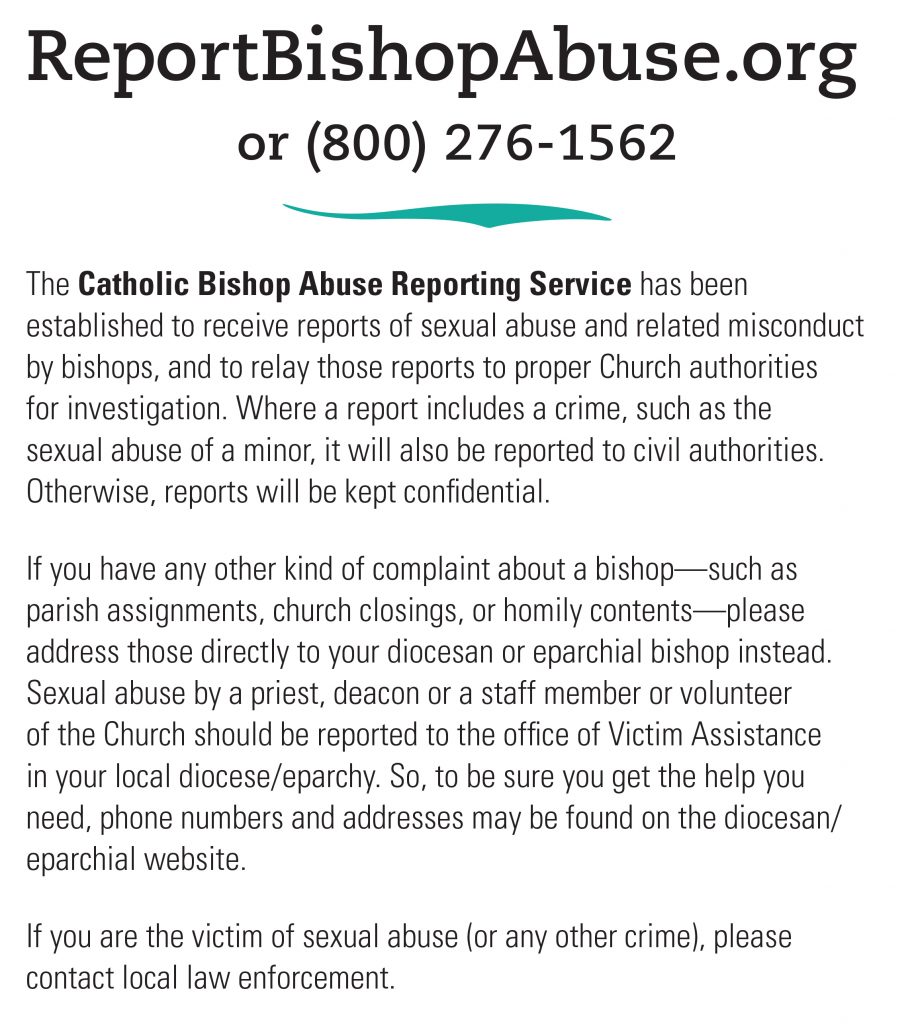 In response to “Vos estis lux mundi,” the United States Conference of Catholic Bishops approved three documents at its fall 2019 meeting affirming full commitment to the provisions in Pope Francis’ Apostolic letter as well as directives and protocols for fulfilling the mandates in “Vos estis lux mundi.” The three documents – “Affirming our Episcopal Commitments,” “Directives for the Implementation of the Provisions of ‘Vos estis lux mundi’ Concerning Bishops and their Equivalents” and “Protocol Regarding Available Non-Penal Restrictions on Bishops” – may be found on the website of each diocese in Indiana.

Under the new third-party reporting service, complaints will be fielded by Convercent, Inc., an independent company, which is operating the toll-free hotline and website. Convercent is responsible for sending the allegations to the appropriate metropolitan archbishop and to the Apostolic Nuncio, who is the Holy Father’s representative in Washington, D.C. who sends the report to the Holy See.  The Catholic Church in the United States has 32 provinces. Each province has one archdiocese plus several dioceses. The head of the archdiocese (the archbishop) is also known as the “metropolitan,” and he presides over the province. The other dioceses are referred to as “suffragan” dioceses.

A layperson has been appointed by each metropolitan to receive reports of conduct about bishops either through the third-party reporting entity or those made directly to the metropolitan. In addition to appointing a layperson to receive reports, each metropolitan is to appoint qualified experts to help with investigations of claims. In Indiana, the list of experts, who are all lay people, includes retired police detectives, a former federal prosecutor, clinical psychologists, a retired civil rights attorney, a school principal and others with appropriate areas of expertise.

Once a report has been received, the metropolitan will promptly comply with all applicable civil laws with respect to making reports to civil authorities and will encourage anyone with an allegation to make his or her own report to civil authorities. Each metropolitan is also responsible for seeing that any person making a report of having been harmed receives pastoral care.

An initial examination of the report is to be immediately conducted to determine whether or not the report appears manifestly unfounded or whether its impossibility or falsehood is obvious, clear and in need of no further investigation. If the report is determined to be manifestly unfounded, the Apostolic Nuncio should be informed of the reasons for the conclusion and provided any relevant information. The Apostolic Nuncio can direct that further inquiry be conducted in order to determine with more certainty that the report is false.

In accord with the presumption of innocence, all appropriate steps are to be taken to protect the reputation of the person under investigation, to assure the exercise of other rights afforded him under canon law, and to restore his good name if it has been illegitimately harmed.

These directives will be reviewed every three years by the United States Conference of Catholic Bishops.