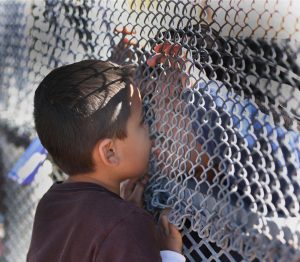 For nearly a half century, the Church in the United States has celebrated National Migration Week by reflecting on the circumstances confronting migrants, including immigrants, refugees, children and victims and survivors of human trafficking. The theme for National Migration Week 2020, “Promoting a Church and a World for All,” draws attention to the fact that every family has a migration story, whether recent or in the distant past.

During National Migration Week, Catholics are encouraged to take the opportunity to engage migrants in a meaningful way, as community members, neighbors and friends.

At year’s end, humanitarian aid for migrants moves across border

WASHINGTON (CNS) — Over the last year, Catholic dioceses on the U.S. side of the border with Mexico, in places such as El Paso and Brownsville, Texas, scrambled to accommodate the growing number of children, men and women crossing the border, seeking asylum and entering the U.S.

Donations, volunteers and financial help flowed into shelters, such as the Catholic Charities of the Rio Grande Valley’s respite center in McAllen, Texas, to help clothe, feed and provide other temporary help to the migrants.

But the introduction of the Migrant Protection Protocols, also called MPP and popularly known as the “Remain in Mexico” policy, rolled out by the Trump administration in early 2019, greatly slowed the flow of migrants into the U.S. in the last part of the year. Yet, it didn’t slow the exodus, nor the conditions of violence, climate change and poverty that have sent tens of thousands fleeing from Central America, seeking safety or better economic conditions to the north.

Many still are fleeing, and as 2019 came to an end, Catholic dioceses remained on alert to help the migrants — but this time, on the other side of the border.

“It was a difficult year,” said Bishop Eugenio Lira Rugarcia of the Diocese of Matamoros, Mexico, during a joint event Dec. 13 with Brownsville’s Bishop Daniel E. Flores and Auxiliary Bishop Mario Aviles, as they welcomed humanitarian aid from the Knights of Columbus destined for a shelter for migrants in Matamoros, Mexico. There, thousands of men, women and children who normally would have been able to enter the U.S. as applicants for asylum, before MPP, now are stranded.

“Remain in Mexico” dictated that anyone seeking asylum in the U.S. had to stay on the other side of the border until their case could be heard by a U.S. immigration court. Since January, more than 55,000 trying to enter the U.S. to ask for asylum at various ports of entry have been forced to stay in Mexico and some in dangerous territories controlled by drug cartels. 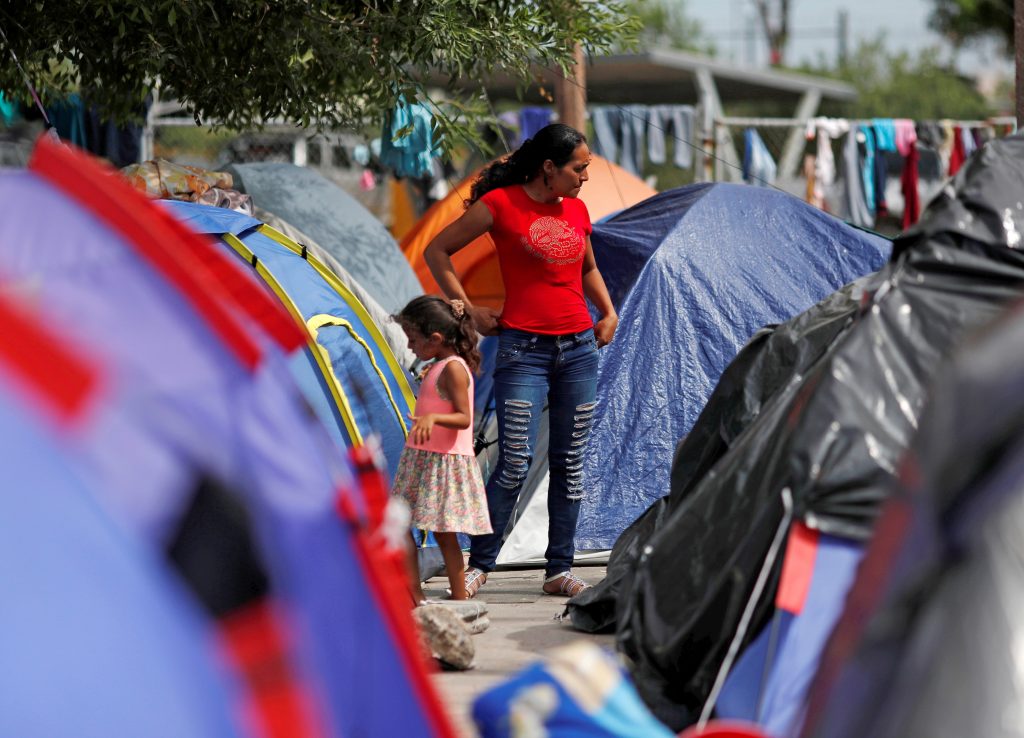 Central American migrants who were returned to Mexico from the U.S. under the Migrant Protection Protocols, are seen Sept. 14, 2019, outside their tent in Matamoros, Mexico. Sister Norma Pimentel, a member of the Missionaries of Jesus, who is executive director of Catholic Charities of the Rio Grande Valley in Texas and a longtime advocate for immigrants and refugees, said about 2,000 families have camped out on the Mexico side in Matamoros while they wait to be called for their asylum cases. (CNS photo//Henry Romero, Reuters)

Dioceses, such as the one in Matamoros, have stepped in to help but can only do so with the help of their sister dioceses across the border.

Makeshift camps have formed close to the border in Mexico, where people wait their turn for a hearing on U.S. soil, even as figures released Dec. 19 showed the slim chance migrants have of getting in: Just 117, out of the tens of thousands who showed up at the border since the policy began, have been granted protection, according to a December Syracuse University report based on immigration court figures.

Previously, authorities had released migrants inside the U.S. and many passed through shelters such as McAllen’s respite center en route to a family member’s home or a friend’s, anyone who would take them in while they waited for a hearing. The respite center’s executive director, Sister Norma Pimentel, became the face of those in the Church providing help.

The Rio Grande’s Catholic Charities shelter, which she runs, was seeing up to 1,000 people a day at the height of the wave of incoming migrants in 2019, said Sister Pimentel in a Nov. 10, 2019, interview with Catholic News Service in Baltimore.

At year’s end, that number had dropped to just 10 to 20 migrants a day in McAllen, but that didn’t mean the problem was over, said Sister Pimentel, a member of the Missionaries of Jesus. 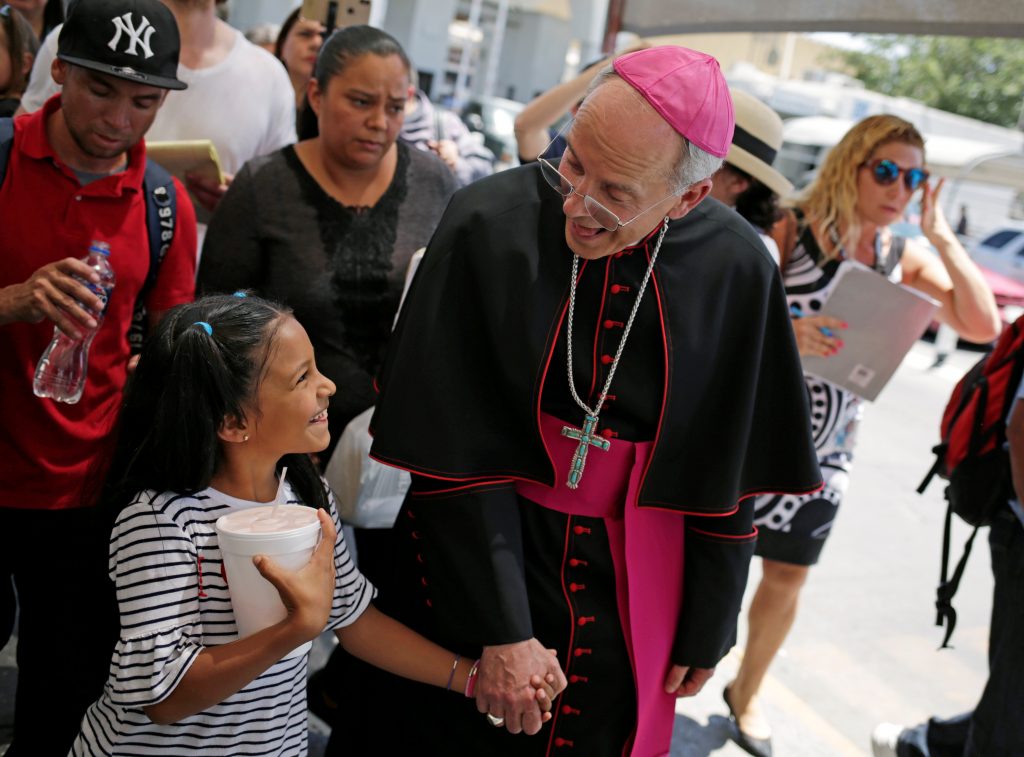 Bishop Mark J. Seitz of El Paso, Texas, shares a smile with a Honduran girl named Cesia as he walks and prays with a group of migrants at the Lerdo International Bridge in El Paso June 27, 2019. Over the last year, Catholic dioceses on the U.S. side of the border with Mexico, in places such as El Paso and Brownsville, Texas, scrambled to accommodate the growing number of children, men and women crossing the border, seeking asylum and entering the U.S. (CNS photo/Jose Luis Gonzalez, Reuters)

Like the Knights of Columbus, Sister Pimentel took her mission across the border into Mexico to help. But unlike the amenities to be found at the shelter Catholic Charities provided in McAllen, there is nowhere in the camps for the migrants to sleep, eat, bathe or seek basic shelter from the elements while they wait. She posted video on Facebook of a windstorm ripping through the area, kicking up dust as migrants took shelter in small tents.

“This situation has become more complicated,” Sister Pimentel told CNS. “The weather is changing. There are rains coming, the cold. These families are exposed to multiple dangers and there’s a complete disarray.”

About 2,000 families have camped out on the Mexico side of a bridge in Matamoros while they wait to be called for their asylum cases, she said. But it’s not a place where hygienic or safety conditions exist, noted Sister Pimentel, who worries particularly about what it could mean for the health of children and families.

Some groups, including Catholic organizations, are looking for short-term solutions, such as organizing cleaning crews, taking food and clothes and tents to provide minimum protection, medical help, but for now “families are suffering tremendously,” Sister Pimentel said. “All we want is that they be cared for with dignity.”

She places blame on the policy that is keeping them in Mexico, where local governments do little to help the migrants.

“Our country has to provide a better response than the one it is providing right now with this policy,” she said. “Leaving them in Mexico is dangerous. Even the residents of Mexico are afraid because of the confrontations among the cartels, the organized crime. Why are we putting these families in danger?”

During the Dec. 13 event, which Sister Pimentel also attended, bishops voiced worries that the plight of the migrants had been all but been forgotten by the public. Bishop Flores said, however, that the movement of people is taking place “not just in the Americas but in other parts of the world” and it’s something that can’t be ignored. Figures from the U.N. High Commissioner for Refugees put the number of those leaving their homelands due to conflict, persecution or violence at more than 25.9 million worldwide in 2019.

“As the pope says, the problem is one that many don’t want to see, don’t want to know about,” Bishop Flores said in Spanish to a group of reporters, and others say that it’s not their problem. “The Church says, it is the problem of humanity and we are human beings.”

For its part, the Catholic Church in the U.S. and around the world, through its organizations and via its leaders, maintains its steady commitment to extend help – even if it means having to cross a border to do so, just as the Texas bishops did in mid-December and just as El Paso’s Bishop Mark J. Seitz did in late June when he helped a group of migrants with health conditions enter the U.S.

“This is a sign of who we are here on the border,” said Bishop Aviles. “That when one side or the other needs helps, we’re always one Church, one family.”

Though the Church’s actions on the border, because of the urgent nature of the humanitarian challenges, command immediate attention, they are by no means the only effort on the part of the Catholic Church to tend to matters dealing with migrants.

Through advocacy and lobbying efforts, it has publicly supported migrants, and leaders have raised their voices in the migrants’ defense, including support of young adults who were brought into the country illegally as children and whose fate may be decided in 2020 by the U.S. Supreme Court when it rules in the DACA case — Deferred Action for Childhood Arrivals. The Church also supports beneficiaries of Temporary Protected Status who are at risk of losing protections in the upcoming year.

Perhaps one of the Church’s biggest shows of support for migrants came from the pope himself Dec. 19, when be welcomed to Rome 33 migrants who had arrived through the Greek island of Lesbos.

“We must rescue and save because we are all responsible for the lives of our neighbor and the Lord will ask us to account for them at the moment of judgment,” he said during the meeting.