According to Vatican News, Msgr. Ratzinger died in Regensburg, Germany, where he had been hospitalized. Pope Benedict, 93, flew to Regensburg June 18 to be with his ailing brother.

When the retired pope arrived in Germany, the Diocese of Regensburg issued a statement asking the public to respect his privacy and that of his brother.

“It may be the last time that the two brothers, Georg and Joseph Ratzinger, see each other in this world,” the diocesan statement said. 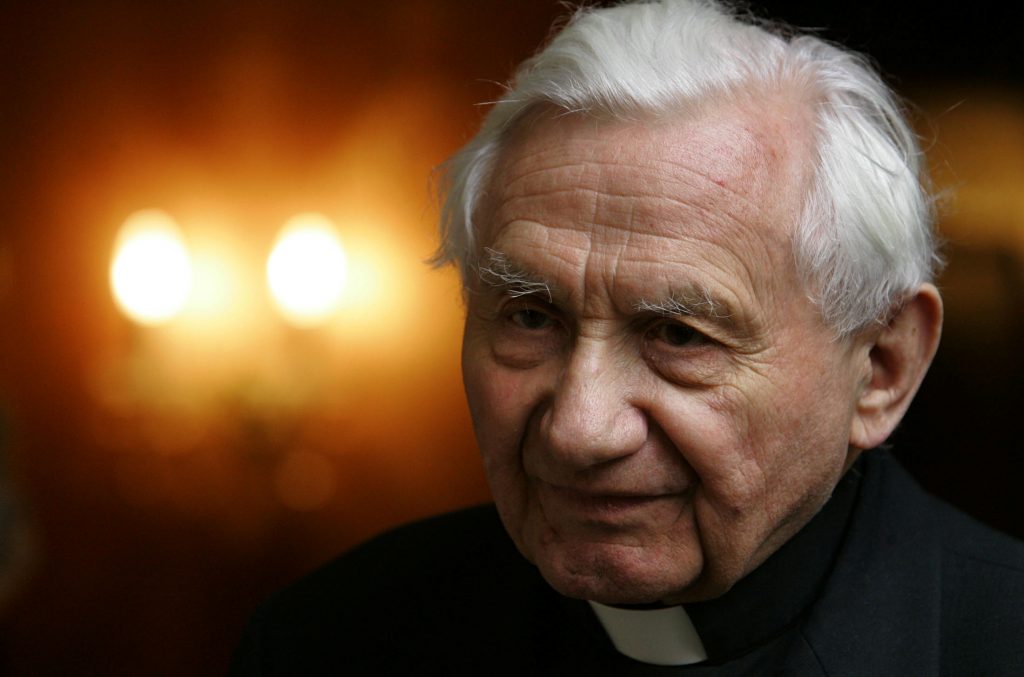 The two brothers attended the seminary together after World War II and were ordained to the priesthood together in 1951. Although priestly ministry took them in different directions, they continued to be close and to spend holidays and vacations together, including at the Vatican and the papal summer residence in Castel Gandolfo. Their sister, Maria, died in 1991.

In an interview in 2006, Msgr. Ratzinger said he and his brother entered the seminary to serve. “We were willing to serve in whatever manner, go wherever the bishop would send us, although we both had our preferences, of course. I was hoping for a calling related to my interest in music, and my brother had prepared himself from a theological-science point of view. But we were not in this to indulge in our personal hobbies. We said yes to priesthood to serve, in whatever way was needed, and it was a blessing we both got to follow church careers that were also in accordance with our secret wishes at the time.”

Born at Pleiskirchen, Germany, in 1924, Msgr. Ratzinger already was a proficient organist and pianist by the time he entered the minor seminary in Traunstein in 1935. Forced to leave the seminary when war broke out, he was wounded while serving in Italy with Germany’s armed forces in 1944 and later was held as a prisoner of war by U.S. forces.

When the war ended, he and his brother enrolled in 1946 in the seminary of the Munich and Freising Archdiocese and were ordained priests five years later. He directed the Regensburg boys’ choir from 1964 to 1994, when he retired.

Six years after he retired, accusations were made that the head of the school the boys attended sexually abused some of them. Msgr. Ratzinger said he had no idea the abuse occurred, but nevertheless he apologized to the victims. He did say that he knew the boys were subjected to corporal punishment at the school, but he had not known “the exaggerated vehemence with which the director acted,” he told the Bavarian newspaper, Neue Passauer Presse. 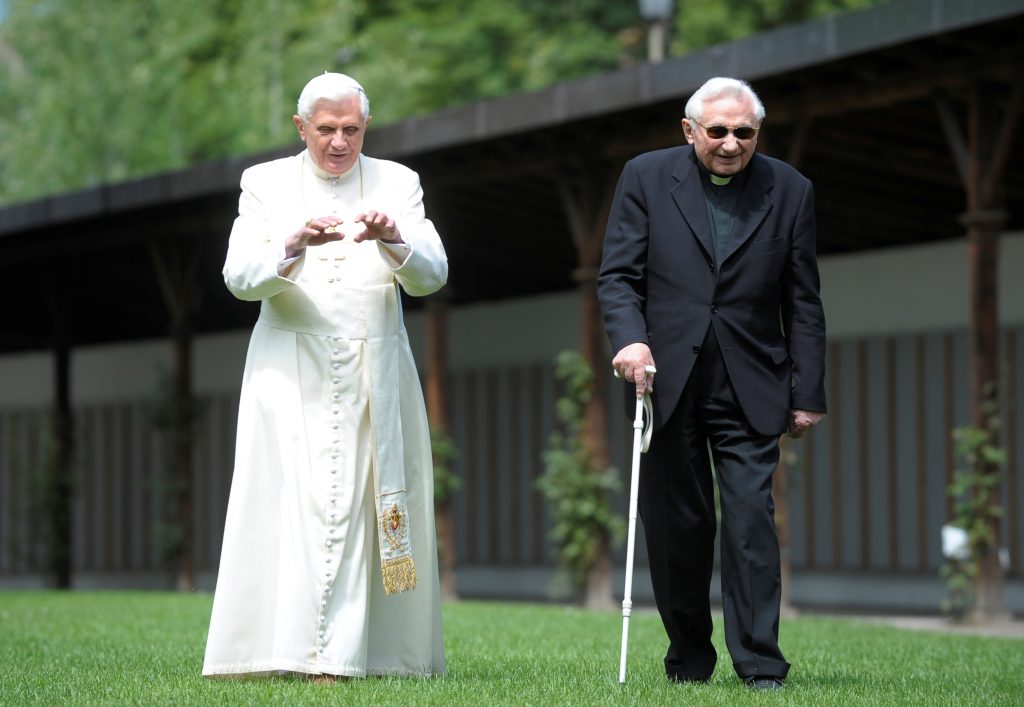 When Msgr. Ratzinger was named an honorary citizen of Castel Gandolfo in 2008, his younger brother, Pope Benedict, told the crowd, “From the beginning of my life, my brother was always not just a companion, but also a trustworthy guide.”

At the time Pope Benedict was 81 and his brother was 84.

“The days left to live progressively decrease, but in this stage as well, my brother helps me to accept with serenity, humility and courage the weight of each day. I thank him,” Pope Benedict said.

“For me, he has been a point of orientation and of reference with the clarity and determination of his decisions,” the now-retired pope said. “He always has shown me the path to take, including in difficult situations.”

The brothers were together in public again in January 2009 to celebrate Msgr. Ratzinger’s 85th birthday with a special concert in the Vatican’s Sistine Chapel, the site of the conclave that had elected Pope Benedict in 2005.

The Regensburg boys’ choir, the Regensburg cathedral orchestra and guest soloists performed Mozart’s “Mass in C Minor,” a favorite of both brothers and one that carried strong memories. Pope Benedict told the guests in the Sistine Chapel that when he was 14, he and his brother went to Salzburg, Austria, to hear the Mozart Mass.

“It was music at prayer, the divine office, in which we almost could touch something of the magnificence and beauty of God himself, and we were touched,” the pope said.

The pope ended his remarks praying that the Lord would “allow all of us one day to enter the heavenly concert to experience completely the joy of God.”