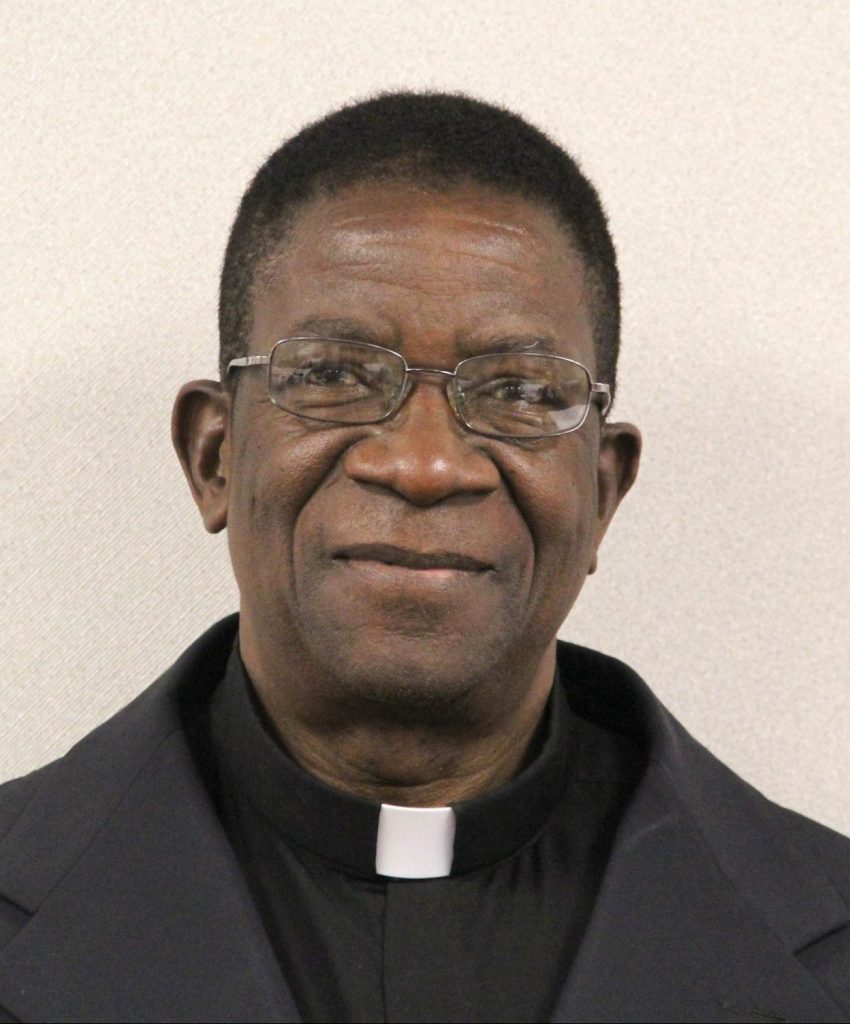 The melodious sound of singing in Latin first attracted Msgr. Pius Ilechukwu to the priesthood. Then, in the seminary, he discovered the journey to becoming a priest is not only Latin but many other subjects and skills as well.

God has continued to encourage and support him on his journey, he said.

“I thank God I am 40 years in His vineyard doing my best, even though I know my best is not ‘the best,’” the monsignor said.

Msgr. Ilechukwu will celebrate his 40th anniversary as a priest on July 5.

While growing up in the city of Ihiala in southeast Nigeria, he said his parents provided him with a strong foundation in the Catholic faith and in life.

“My father told me to tell the truth no matter what,” he recalled.

His father died when he was young, in 1957. His mother brought up Pius and his four brothers. She was a strong woman who practiced her Catholic faith and worked hard to provide for her family, the monsignor said.

“Whatever I tried to do, I tried to make sure I finished it,” he said of her influence on him.

He became interested in the priesthood in sixth grade, as a member of his Catholic school’s choir, which sang in the Latin language. At that time, the Catholic Church celebrated Mass in Latin rather than in a country’s commonly used language.

As the choir celebrated after winning an archdiocesan singing competition, their principal spoke to them, saying priests know the Latin language and can translate Latin into English as well as into a local Nigerian language, Igbo. That inspired the young Pius to try for and earn entry to the seminary, where he studied enthusiastically.

As a seminarian, during pastoral experience in a remote village, one day he was called to pray for a sick girl. The family had no way to take her to a hospital and no money to pay for medical care.

He went and prayed for her. He also thought that, if he had been a priest, he could have prayed over the girl with prayers that could do more to help her.

“The girl was better in two days,” Msgr. Ilechukwu said. “It was an inspiration to me and an indication that I was on the right road.”

Looking back, the monsignor said he could see God calling him and God’s hand guiding him all along the way.

After being ordained a priest, Msgr. Ilechukwu served the Church in Nigeria as a parish pastor in many parishes, a spiritual director in a minor seminary and a rector formator in a spiritual year seminary.

On his 25th anniversary as a priest, he asked his bishop if he could take a sabbatical because he had worked to that point without leave. The bishop granted him a two-year leave.

After asking friends for suggestions on where to go for his sabbatical, he applied to spend that time in the Diocese of Fort Wayne-South Bend and in Canada, he said. The local diocese responded quickly and seemed eager to have him, so he came here.

“Thanks to God that I came here, for I met a really devoted, loving, concerned people of God in the parishes where I ministered,” he said.

As the end of his sabbatical approached, former Bishop John M. D’Arcy asked if he would consider staying to help minister in the diocese. Bishop D’Arcy sought and received approval from the monsignor’s bishop in Nigeria to extend his stay here. The two dioceses have continued to extend his service here ever since.

In June 2018, he was assigned as a parochial vicar at the Cathedral of the Immaculate Conception in Fort Wayne. He has also been assisting since mid-February at St. Henry Parish in Fort Wayne.

“Wherever there are human beings, I will work no matter where because of the joy and love to help my fellow Catholic Christians to live lives of holiness,” he said.

He has enjoyed serving in this diocese.

“I know the people love me and want me to stay with them,” he said. He also likes being home in Nnewi, Nigeria, where local Catholics also want him to return.

Msgr. Ilechukwu said what he loves most about being a priest are the sacraments of the Eucharist and reconciliation. That priests can transform ordinary bread and wine into the Body and Blood of Jesus Christ during consecration at Mass is an amazing reality.

“That is why I celebrate Mass every day, with people or without people,” he explained. “It is a thanksgiving to God for calling me to be His priest.”

Through the sacrament of reconciliation, he added, he can release people from the shackles of the devil by forgiving their sins.

Being a priest has its difficulties, he said, including a sense of isolation. Priests also can be said to be swimming against the current of society, he noted. However, knowing Jesus Christ is with you prevents a person from feeling lonely, even if they are living by themselves.

The monsignor, who will turn age 75 on Nov. 4, hopes to retire then and return to Nigeria. He still has two brothers with their wives, children and extended family members living there. He expects to assist there in ministry how and where he can.

“I thank God for choosing me to be a priest, and I thank Him for His blessings and for continuing to support me in my priestly ministry,” he said.

He also expressed thanks to his bishops: here, Bishop D’Arcy and Bishop Kevin C. Rhoades, and in Nigeria, Bishop Hilary P. Odili Okeke and Cardinal Francis Arinze, the latter of whom ordained him.

“I also thank all the people of God I have worked with. I thank them for their love and support,” he said. “I promise them my prayers, wishing them well.”

He offered advice for the many people whom he loves to serve:

“Heaven is for us all. I hope you are doing something about it.” And from 1 Corinthians 10:31: “Whatever you do, do it for the greater glory of God.”