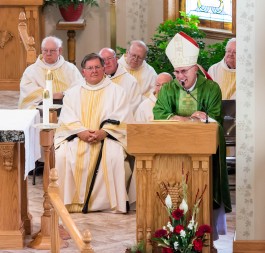 During the Mass Bishop Rhoades held up the way in which Msgr. Galic lived the priesthood as a servant. “His impact on the presbyterite of this diocese is something for which I am very, very grateful,” he told the faithful who were present; and offered prayers that in retirement Mary, the Mother of God, would walk with him. Photo by Joe Romie

Young Bernie grew up in Newport, Pennsylvania, 25 miles west of Harrisburg. Coincidentally, he was baptized in St. Francis of Assisi Church where, prior to being ordained a bishop in 2004, Father Rhoades served as pastor from 1990-95. “To put it in perspective, when I left for the seminary, Bishop Rhoades was just two years old,” Monsignor Galic said.

His parents, Frank and Ursula, had five sons: Emory, still living near the homestead across from Newport High School where they all graduated; Bernard; Phil, who died in Florida two years ago; Michael, living in Nevada after spending 30 years in Alaska; and Bill, who last year moved from Alaska to Ossian, Indiana, and is living near Monsignor Galic’s new apartment. All the siblings are retired and, along with their families, attended their brother’s retirement.

“A religious vocation always was in the back of my head as a kid,” said Monsignor Galic, even though the family attended Mass at a military school. He made his First Communion when he was seven in a newly-built church named, perhaps serendipitously, St. Bernard, in New Bloomfield, manned by the Glenmary Fathers dedicated to establishing a Catholic presence in rural areas and small towns. His priestly vocation was “cemented” in his head, he said, after many years of serving the Stations of the Cross on Fridays during Lent. He also had the feeling he wanted to be a doctor but decided to first try the seminary and if he didn’t work out he would enroll in medical school. 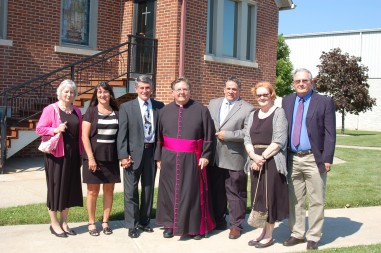 From left are sisters-in-law Sylvia, the wife of Msgr.’s deceased brother, Phil; Beverly, Mick, Msgr. Bernard, Bill, Joyce and Emery Galic. They are all originally of the Harrisburg diocese, like Bishop Rhoades, and all traveled to Indiana for his retirement Mass and celebration.

As a junior in high school, Galic dreamed traveling as a missionary priest and teaching the Faith. “Instead, I ended up teaching religion to high school kids in Donaldson, Indiana,” he quipped, after attending Sacred Heart School of Theology in Hales Corners, Wisconsin, where he was ordained a religious priest on August 30, 1970. His ministry not only included teaching theology in the minor seminary but also speech and theater. In fact, during the summer of 1970 he earned a master’s degree in the subject from Indiana University and also received his master of divinity degree that same year.

Even though he loved teaching and directing two plays a year for a decade, he felt drawn to the life of a diocesan priest. And when the high school in Donaldson was closed, he met with Bishop William McManus and was incardinated into the local diocese in 1980 as a diocesan priest. His first assignment was as associate pastor at St. Michael, Plymouth. From there he was sent to St. Joseph, Fort Wayne, but for just 10 weeks. Due to an illness affecting the pastor at St. Mary of the Assumption in Avilla, Father Galic was named pastor there.

Five years later, he assumed the position of pastor at Holy Family, South Bend, where he remained for 24 years. During his long tenure, a new church was built, the school was expanded with a new library and gym, and the parish debt was eliminated. Since 2010, when he was named a Monsignor, he has served as pastor of St. Aloysius.

He also initially hosted the TV Mass in South Bend for 21 years. “It’s a wonderful way of making the local church visible,” he said, “and people take great pride in seeing their local priests in this ministry.”

He also served the diocese on the marriage tribunal, as director of vocations for more than 20 years and as an episcopal vicar.

“What I’ve learned through the years is that happiness follows obedience,” he continued. “If you do what you’re told by the Church you’re going to be happy. I’ve had plenty of assignments I would not have chosen, but I’ve never been unhappy. That’s true not only in the priesthood, but in every vocation.”

In retirement, Monsignor Galic hopes to be well enough to continue traveling. He’s visited Medjugorje annually for a retreat about 24 times. He’s also been to Austria three times to personally connect with a pen pal, Joseph, he’s had since fourth grade.

Monsignor Galic enjoyed gardening, farming and even butchering when he was in the rural area seminary. “Had I not been ordained, I would have enjoyed being a farmer,” he exclaimed. “I admire their faith!”

Monsignor Galic will celebrate Mass on weekends wherever he’s needed, he said, and will remain a parishioner at St. Aloysius.