NEW YORK (CNS) — “If you want to send a message,” Hollywood stalwart Sam Goldwyn is said to have remarked — with regard to someone’s yen to make a “meaningful” movie — “use Western Union.”

While telegrams may have been overtaken by more recent technology, the advice remains sound, as the faith- and sports-themed drama “Overcomer” (Sony), alas, proves.

Alex Kendrick directed, co-wrote (with his brother, Stephen) and stars in this well-intentioned film. He plays John Harrison, the basketball coach at an evangelical Christian school whose shot at a championship is ruined by the shuttering of a local factory, his hometown’s main employer.

With his best players, other than his own son, Ethan (Jack Sterner), relocating to more prosperous communities and the school as a whole feeling the pinch, John is asked by its principal, Olivia Brooks (Priscilla C. Shirer) to help out by taking over the track team. He reluctantly agrees. But tryouts produce only one interested student, cross-country runner Hannah Scott (Aryn Wright-Thompson).

Hannah not only suffers from asthma, she also has a troubled home life. In the absence of her parents, both of whom she believes to have succumbed to drug addiction, Hannah lives with her overworked grandmother, Barbara (Denise Armstrong). One symptom of Hannah’s damaged emotional state is her habit of purloining other people’s property — John’s watch, for example. 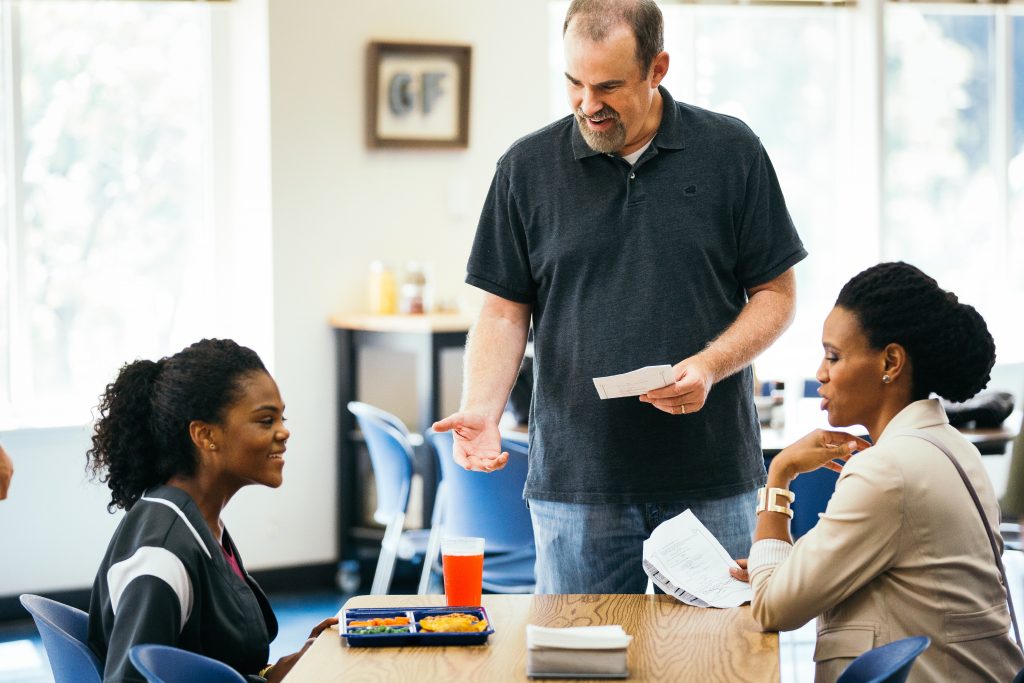 Alex Kendrick, Shari Rigby and Aryn Wright-Thompson star in a scene from the movie “Overcomer.” The Catholic News Service classification is A-II — adults and adolescents. The Motion Picture Association of America rating is PG — parental guidance suggested. Some material may not be suitable for children. (CNS photo/Sony)

On a visit to a nearby hospital — where he boosts ailing fellow parishioners’ spirits, in tandem with his pastor — John has a chance encounter with Thomas Hill (Cameron Arnett), a born-again reformed addict. Already blinded by diabetes, Thomas is facing potentially fatal further complications of the disease.

As John befriends Thomas, a former track champion, he seeks his advice on how to maximize Hannah’s gifts. He also comes to believe that Thomas and Hannah’s fates are linked.

Arnett gives a strong, lyrical performance, and the movie showcases the enduring bond between John and his wife, Amy (Shari Rigby).

But Kendrick gets in his own way as sermonizing hobbles an otherwise appealing — if leisurely unfolded — story of conversion and reconciliation that would have been more effective if allowed to speak for itself. The theology on offer, moreover, is flawed from a Catholic perspective, especially as regards the role of baptism in establishing Christian identity.

Unsurprisingly, given the movie’s pedigree, objectionable elements are entirely absent. Yet some of the topics raised make this unlikely fare for kids.

The film contains mature themes, including narcotics use, and a bit of marital discord. The Catholic News Service classification is A-II — adults and adolescents. The Motion Picture Association of America rating is PG — parental guidance suggested. Some material may not be suitable for children.

John Mulderig is on the staff of Catholic News Service.