Ironically, the film arrives in theaters almost seven months to the day after the demise of the 19th-century impresario’s most lasting legacy, the Ringling Bros. and Barnum & Bailey Circus. 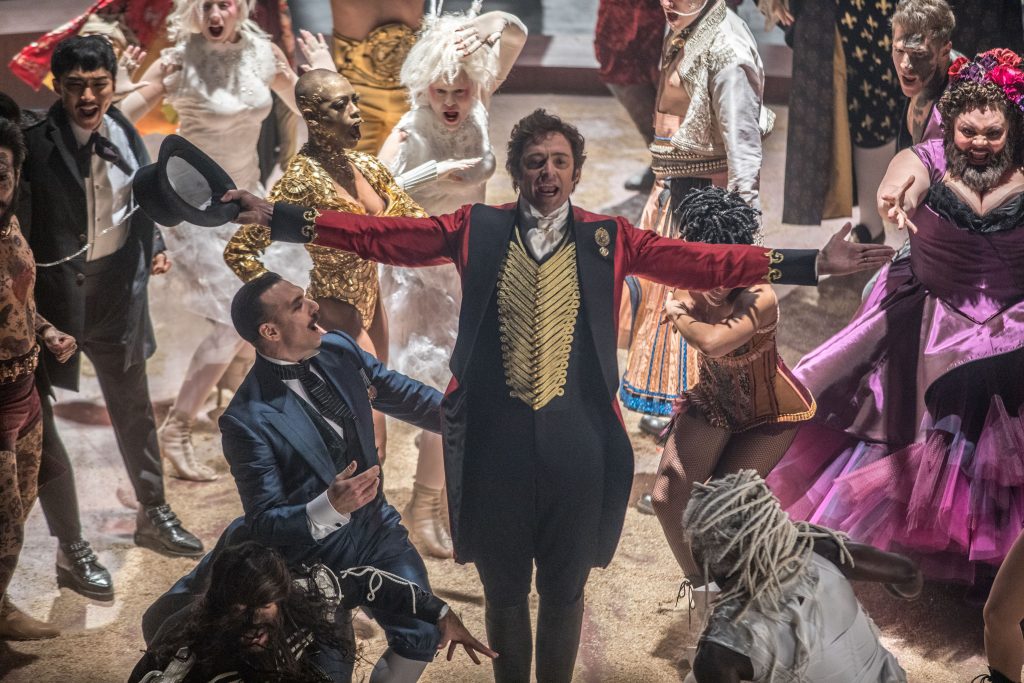 Hugh Jackman stars in a scene from the movie “The Greatest Showman.”

Though unlikely to engage the youngest viewers, an emphasis on marital fidelity and family values in general, together with the virtual absence of objectionable material, makes this screen biography appropriate for most others. Moviegoers’ appreciation of it, however, will likely depend on their taste for the Lloyd-Webber style of Broadway and West End theater, whose approach it imitates.

Hugh Jackman leads with his chin in playing Barnum with bring-on-the-lions enthusiasm. Jenny Bicks and Bill Condon’s script, meanwhile, traces its protagonist’s rise from impoverished beginnings to worldwide fame with the kind of occasionally challenged, but ultimately unquenchable, optimism that might have appealed to novelist Horatio Alger.

Barnum gains support in his ascent from his childhood sweetheart, Charity (Michelle Williams), who eventually turns her back on her wealthy and well-bred parents to marry him. Also shunning a genteel background to bolster Barnum’s career is his unlikely business partner, New York socialite Phillip Carlyle (Zac Efron).

Assembling an ensemble of such unusual figures as Lettie Lutz, aka the Bearded Lady (Keala Settle) and dwarf “General,” Tom Thumb (Sam Humphrey), Barnum turns a large profit by exciting the curiosity of the masses. Tensions arise, though, when he shifts his focus away from these loyal performers and friends to concentrate on backing the American premiere of Swedish diva Jenny Lind (Rebecca Ferguson).

Barnum risks his fortune in the effort to promote Lind, hoping thereby to gain the elite standing that has previously eluded him. The fact that this breakthrough may require him to shun those on whom he has built his success fails, initially at least, to deter him.

He is equally blind to the danger his absence on the road with Lind poses to his bond with Charity and their children — not to mention the foreseeable temptation arising from the beautiful soprano’s prolonged company.

There is an implicitly pro-life message underlying director Michael Gracey’s feature debut since its treatment of the social outsiders with whom Barnum surrounded himself strongly vindicates their inherent dignity and entitlement to respect. The picture’s portrayal of Carlyle’s convention-defying romance with African-American trapeze artist Anne Wheeler (Zendaya) is equally in line with Christian morals.

Both these aspects of the plot, however, betray historical naivete in projecting a contemporary outlook backward onto Victorian-era America. The audience is left with the impression that all the gaping inequalities of Barnum’s day might easily have been effaced by a few brassy songs delivered with the requisite zest.

Still, parents on the lookout for wholesome holiday fare will probably refrain from such nitpicking as, perhaps with teens in tow, they take in a love and success story that’s old-fashioned in the best sense.

The film contains some nonlethal violence, a mild oath and a racial slur. The Catholic News Service classification is A-II — adults and adolescents. The Motion Picture Association of America rating is PG — parental guidance suggested. Some material may not be suitable for children.

John Mulderig is on the staff of Catholic News Service.

“Jumanji: Welcome to the Jungle” (Columbia)

Amusing comic adventure in which a quartet of teens (Alex Wolff, Ser’Darius Blain, Madison Iseman and Morgan Turner) find themselves magically transported into an old video game where they inhabit the avatars they chose before the start of play (Dwayne Johnson, Kevin Hart, Jack Black and Karen Gillan). Most of the laughs come from the contrast between the characters’ real-life personas and the bodies and personalities they take on within their new environment. As they face and overcome a series of challenges in their quest to win the game — the only means of reemerging from it — the ensemble learns familiar Hollywood lessons about the value of teamwork and the courage required to pursue cherished dreams. Director Jake Kasdan’s film, more a variant on than a sequel to 1995’s “Jumanji,” and based, like its predecessor, on Chris Van Allsburg’s 1981 children’s book, keeps its conflicts almost completely bloodless. But some off-color gags and a considerable amount of vulgarity in the dialogue render this strictly grownup fare. Gunplay and other combat violence, some of it harsh but with minimal gore, at least one use of profanity and a couple of milder oaths, sexual and anatomical humor, a single rough term, a few crude and numerous crass words. The Catholic News Service classification is A-III — adults. The Motion Picture Association of America rating is PG-13 — parents strongly cautioned. Some material may be inappropriate for children under 13.

Good values help to redeem a somewhat padded plot in this animated adaptation of Munro Leaf and Robert Lawson’s 1936 children’s classic “The Story of Ferdinand,” directed by Carlos Saldanha. Escaping the confines of the stable in which he and other bulls are prepared for their fateful confrontation with a matador, the peace-loving protagonist of the title (voice of John Cena), who prefers smelling flowers to locking horns, is adopted as a pet by an affectionate and growing girl (voices of Julia Saldanha and Lily Day). But a misunderstanding sets him back on the path to the bullring where his commitment to nonviolence will be put to the ultimate test. Lively secondary characters (the most prominent voiced by Kate McKinnon) and charming pastoral landscapes surround a theme that all those who base their ethics on the Gospel, and parents in particular, will find congenial. Scenes of peril, some mildly irreverent humor, a vague scatological reference, one slightly crass expression. The Catholic News Service classification is A-I — general patronage. The Motion Picture Association of America rating is PG.

Engrossing sci-fi epic in which the leading general (Carrie Fisher) of an embattled group of rebels sends a messenger (Daisy Ridley) to the distant planet on which her brother (Mark Hamill), a famed warrior, is living in self-imposed exile to summon his help in the desperate struggle against their fascistic enemies (led by Andy Serkis). Though he refuses to join the conflict, the veteran fighter does agree to train the envoy in the ways of the Force, the mysterious spiritual energy from which he derives his prowess. She will need its power when she eventually confronts her leader’s son (Adam Driver), an originally good person who has gone over to the side of darkness, but whose ongoing moral struggle has the potential to sway the outcome of the intergalactic war. The Catholic News Service classification is A-II — adults and adolescents. The Motion Picture Association of America rating is PG-13.