Hogs, choppers, supersport motor bikes, or whatever other names they may be called, dozens of these motorcycles filled the parking lot of St. Patrick Church in Arcola on April 30. Back after a two-year hiatus, the 33rd Blessing of the Bikes took place on the last Saturday of the month in anticipation of the warmer weather and peak motorcycle-riding season. For years, the parish had hosted the event on the Saturday after Easter, pastor Father Thadeus Balinda explained, but with Easter sometimes falling earlier in the spring and the unpredictable weather, they chose to move it to the last Saturday in April. 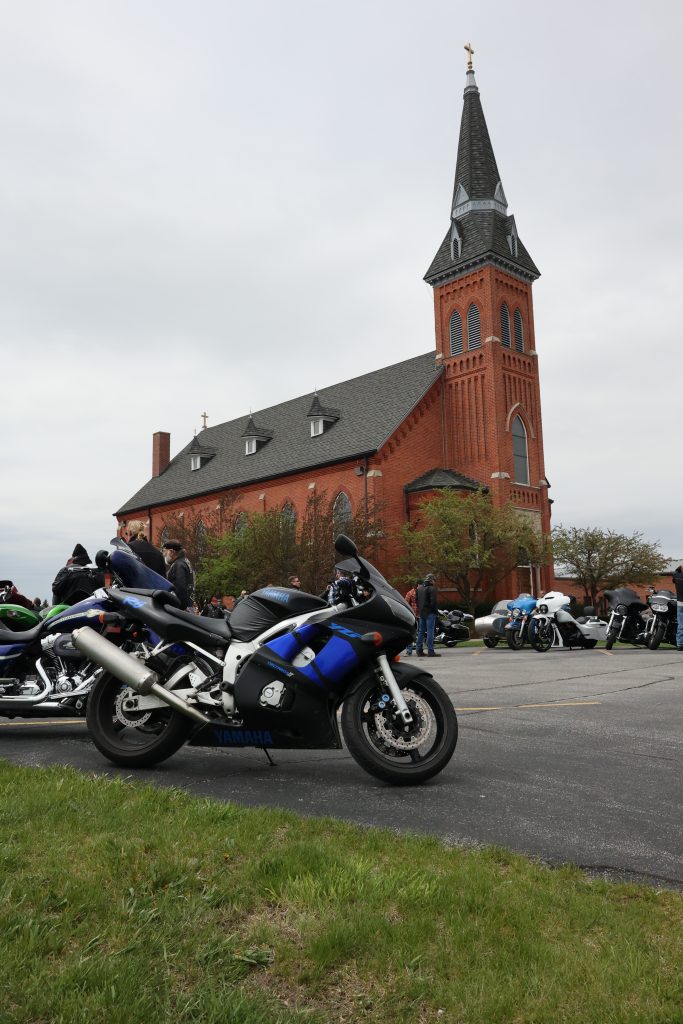 Motorcyclists from around the Fort Wayne-area gathered to share fellowship with other riders and receive a blessing for themselves and their motorcycles at the Blessing of the Bikes at St. Patrick Parish in Arcola before riding off into the great unknown. — Photos by Jennifer Barton

As is typical of Indiana, the weather continued to be unpredictable, with snow one year and rain threatening in the dark clouds looming over this year’s blessing. Fortunately, Father Balinda was able to bless every bike that came through the parking lot before the sky opened in a short but earth-shaking thunderstorm.

The variety of bikes that filled the lot and the street in front of the church were as varied as God’s own children. Harley-Davidsons, Yamahas, three- and four-wheelers and even dirt bikes and a young boy on a bicycle all made appearances at the ceremony.

It might sound odd for a Catholic church to sponsor a motorcycle event, but with the amount of motorcycle riders who frequently travel the backroads around the tiny town west of Fort Wayne near the Whitley County border, it made sense to organizers more than 30 years ago. Patricia Denihan, the parish secretary, explained how the Blessing of the Bikes began in 1989 with only eight bikes. This number grew each year, with the highest attendance reaching 2,000 riders one year. This year’s count totaled roughly 200. “It started purely as a blessing at the parish,” she said, but grew into something greater.

While the event is intended to pray for the safety of those who ride their motorcycles – either across the country or across the county – it also raises money to help the parish youth group attend service trips.

Originally, organizers had simply asked for donations; now they sell concessions and hold a 50/50 raffle to raise money. The first big trip the youth group took with funds raised at the Blessing of the Bikes was to World Youth Day in Toronto in 2002, when St. John Paul II was pope, according to Lila Park, one of the organizers. “It’s just an exciting thing to bring people in,” she said.

Bringing people to the church is more than a monetary goal, said Denihan; it is community outreach. The Blessing of the Bikes brings people together from within the parish, the town and far beyond.

“Something beyond the blessing is that we have the Eucharist here,” Park added. She feels that people are drawn to the church because “we have Christ here.” And that is the greatest outreach that they could provide.

The youth group also added another spiritual element to the blessing this year – a prayer table where participants could write down their intentions and youth group members would meet later to pray for those intentions. Denihan said that she even saw one of the participants take time to light a candle in the small Gothic-style church before the blessing.

Motorcycle riders tend to be painted in a negative light, but more often than not, they simply enjoy the freedom found in the open road. “The people that come are magnificent,” Denihan remarked. Others agreed with her. “They’re coming here to get a blessing, not coming to start a brawl,” one parishioner commented.

And indeed, those present seemed a cheerful lot, greeting old friends, laughing and enjoying the company of other bikers, passing out flyers for other upcoming charity bike rides and buying t-shirts and food to support the youth group.

Father Balinda welcomed back many of the riders who had attended in previous years. Prior to the blessing, a short prayer service commenced outside of the rectory, which included two readings and blessing of the water that Father Balinda sprinkled on the bikes as they rode past him. In his opening remarks, Father Balinda said, “This is our pride.” He spoke of how happy he was to be able to host the event again and to see the many people flock to his parish.

Lisa Van Allen, another parishioner and volunteer, expressed her gratitude toward those who helped make the event possible and those who attended. “We feel so happy today that so many people came.”

Denihan shared how one of the participants had even told her he had been present at the very first one.

In a nod to the parish’s Irish roots and appropriate for the wanderlust biker lifestyle, those present recited the Traditional Irish Blessing before the riders began the procession past Father Balinda to receive their blessing:

“May the road rise to meet you,
May the wind be always at your back.
May the sun shine warm on your face,
The rains fall soft upon your fields.
And until we meet again,
May God hold you in the palm of His hand.”