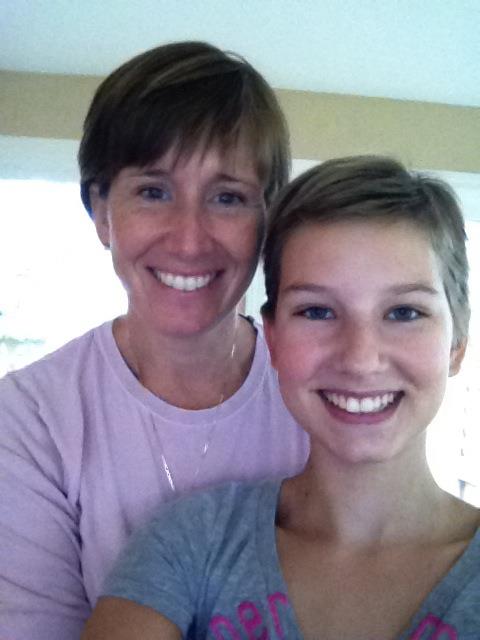 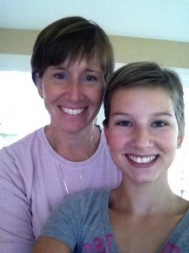 Ruth and Anna Beier work together for ethical research for a cancer cure.

FORT WAYNE — Ruth Beier and her daughter Anna have been in the fight of their lives. A year ago in August, a very active Anna, then 12-years-old, was diagnosed with osteosarcoma, a cancerous bone tumor, and began the arduous journey back to health. Now after months of painful chemotherapy, surgery and rehabilitation, Anna is cancer free.

The promise of health has brought a new awareness to this seventh-grade, homeschooled student and her mom, both of whom have developed a passion for life that now includes hope for others who face cancer. And with that hope comes an interest in ethical research methods and right to life issues.

Respect for all life began with Ruth’s mother who was one of the first to pray outside the abortion facility in South Bend years ago. Her passion for pro-life issues was passed to Ruth, who has now instilled it in her own daughter.

Ruth says, “I believe in the Church’s teachings on the sanctity of life from womb to the tomb. So many moral issues make sense when you understand the consistent teaching of the Church.”

Among the many pro-life issues, including contraception and abortion, lies the controversy surrounding the use of embryonic stem cells, obtained only by destroying living human embryos, for research toward cures, therapies and treatments for the multitude of diseases the population faces currently, including cancer. And after experiencing first hand the rigors of the present day treatment for osteosarcoma, a protocol decades old, the Beiers place their hope in the future of alternative stem-cell research to produce a cure for it and many ailments, all framed in a firm belief in dignity for all life.

As a devout Catholic and parishioner of St. Elizabeth Ann Seton Parish, Anna, along with her parents and four siblings, is passionate about respecting life and says of her cancer treatment, “If getting better meant killing innocent babies, I would have never gone through with cancer treatment.”

She believes there’s more to respecting life than just rallying against abortion as well. “Being pro-life means more to me then just praying for a change. It means reaching out to others and making a change happen,” she says. So she and her mom began to investigate ways they could make a difference in the ethical and moral cause for cures, especially with the use of adult stem cell and umbilical cord blood research.

Ruth’s urgency to help find a cure for cancer due to her courageous daughter’s experience continues still. She says, “Anna’s cancer made me pray and think more specifically about organizations that I would like to support. … Sadly, we know many other young people who are still fighting the good fight.”

With over 300 nonprofit research foundations and academic centers that support embryonic stem-cell research, Ruth was thrilled when she heard about the John Paul II Stem Cell Research Institute based in Iowa.

“I immediately wanted to get involved because it is exactly what I believe our culture needs. … We cannot hope to make true medical progress unless we hold onto the beliefs and practices that protect life at every stage, especially the most vulnerable and innocent life,” she says, adding, “The road you take to get to your destination is just as important as where you are going. We can’t use immoral methods to get to a moral end.”

According to the John Paul II Stem Cell Research Institute’s website www.jp2sri.org, the organization is a “nonprofit research institute whose mission is to advance research and education on stem research in a manner consistent with bioethics that recognizes the sanctity of human life from the moment of conception to natural death.”

An exciting new national gift campaign that began at the institute in July, with former GOP presidential candidate Rick Santorum as official spokesman, titled Give Cures, hopes to raise funds from parish giving for advancement of ethical research and education.

Plans to open a cord blood bank where mothers can donate cord blood from their newborns as an alternative to embryonic stem-cell use, are also in the works. Ruth and Anna are spreading the word about this effort, supported by the bishops of Iowa and the Vatican, and hopes it is successful in funding ethical regenerative research.

Anna says, “Give Cures is offering a way to fight cancer in a moral way. And they have been having more success then research on aborted babies ever did. So if you want a cure for cancer, do it the more effective way. … I think Give Cures is a great way to find answers because no one dies.

“I’ve been to hell and back and there was never a point where I didn’t think life wasn’t worth fighting for. So no matter how dark life may seem you should never think it’s not worth saving. Babies aren’t products to be used for medical research,” she adds with passion.

Ruth says of this fight for all life, “Even though I believe with all my heart that Anna is cancer free, I still feel an obligation to do whatever I can to support finding a cure for cancer in an ethical way. I believe that research on adult stem cells being done at the John Paul II Stem Cell Research Institute will provide that breakthrough.”