Some mothers and daughters share material possessions like clothing and shoes. Some share hobbies. A few have the same career paths. But even fewer share what Maureen and Katherine Alexander have experienced: four years teaching together.

And this year they have the extraordinary privilege of being honored with the esteemed Christ the Teacher award together. Maureen is at St. John the Baptist in South Bend and Katherine is at St. Pius X in Granger.

“I am touched to share this honor with my daughter,” Maureen stated. “Family and faith are the most important parts of our lives.”

Katherine agreed. “This is very special to share this beautiful recognition with my mom.” 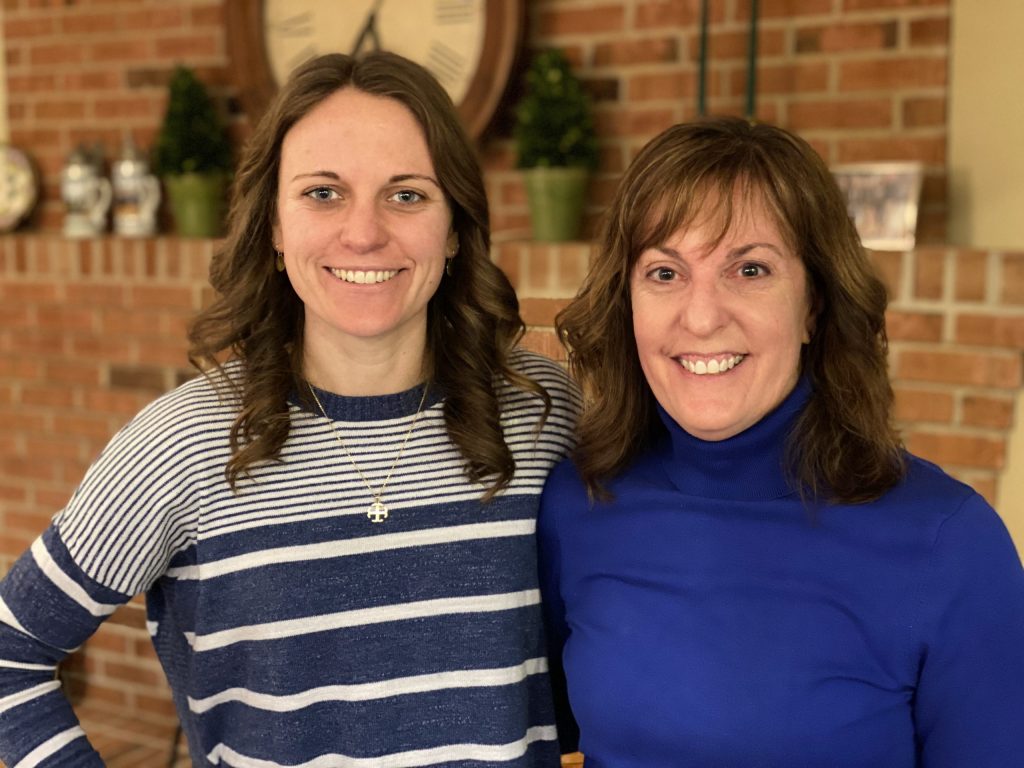 Provided by Katherine Alexander
Katherine Alexander followed her mother Maureen into the field of education, even teaching together at the same school. This year, both received the Christ the Teacher award for their schools, St. Pius X in Granger and St. John the Baptist in South Bend, respectively.

Their career paths were similar. Both women first experienced the same desire to work with children as babysitters, both attended Saint Mary’s College, both taught at St. Anthony de Padua School in South Bend and both made the decision to move to new schools in the same year.

Both women previously received the Christ the Teacher award in different years while at St. Anthony de Padua. Maureen was teaching kindergarten when she won it, and Katherine was working with second graders, which was special for her as she walked with them through their sacraments.

“It was very bittersweet leaving St. Anthony’s and moving on to new schools for both of us, but I think if we would have stayed at the same school, this would have never happened,” Katherine said. “How cool it is to share this honor together in the same year.”

At both of their schools, the awardee is nominated by fellow teachers, rather than by students and parents. It was a different feeling, knowing that their peers recognized their work as exceptional.

Katherine had a couple of excellent role models who inspired her to pursue a teaching career, one of which was definitely her mother. “Growing up, I had a front row seat at witnessing teacher life and my mom made it look so effortless by the way she gracefully handled each day,” Katherine commented. She admired the way that Maureen was able to balance her work and home life, raising three children. “She made it look so easy and fun.”

Katherine has learned for herself that while teaching is not easy, it is definitely enjoyable. “It’s meaningful work. There is purpose. And no class or day is the same, so I like that.”

Her high school physics class at Marian High School gave her an additional boost toward the classroom when then-teacher – and now principal – Mark Kirzeder helped instill in her a love of science through his classroom lessons. He is part of the reason she chose science and math as her specialty. The benefit of teaching in a Catholic classroom, she said, is that: “I talk about my faith and I incorporate that in my science class every day … science and religion go hand-in-hand.”

Now Katherine is the one who fills the role as an example for her young students. When she came to St. Pius X, she decided that it was important for her students to witness her faith outside the classroom, and became a parishioner there, where her students can see her as a greeter or extraordinary minister of holy Communion on various Sundays. In a humorous twist, the baby she nannied for as a young adult is her godson and currently one of her eighth-grade students.

“I realized my students are learning how to be a good human from me,” Katherine said. “They’re not going to remember what I said, but they’ll remember how I made them feel, and I think that’s really what made me into the teacher I am today, that realization.”

While they each have had some experience in the public school setting, both mother and daughter believe they have been called to teach within the Catholic schools system. When she started teaching, Maureen wanted to be in a place where her children could attend, and as her parents sacrificed to send her and her siblings to Catholic schools, so she wanted the same for her three children.

St. Anthony de Padua is still her home parish, but she feels needed at St. John the Baptist. “I teach at a school where less than half the population are Catholic, but their parents have chosen St. John’s as an alternative education for them,” she said. This gives her an opportunity to be a witness to the faith and “incorporate anything I can so that they’ll remember God every day.”

St. John the Baptist has begun using the Virtue=Strength program this year in the classroom, and Maureen has adapted each month’s virtue for her young students to understand. She also took extra time after school this year to learn phonics to help fill the gap that many of her students have faced due to the pandemic and the educational struggles that went with it. “I think I’ve chosen the right school that needed a teacher and needed the dedication that I have.”

In her years as a teacher, Maureen has also mentored future teachers and has particularly paid back her alma mater by accepting 10 Saint Mary’s students as student teachers.

Although she has roughly 35 years of teaching under her belt, Maureen has no plans for leaving her chosen field. “I’ve had success this year with children who were having trouble in public schools and making them feel at home in our Catholic school, and that’s gratifying. The teachers that I teach with and the students that I help – it’s the reason why I go in every day.”