Federal Judge Amy Coney Barrett urged lawyers to view obstacles as opportunities during a speech following a Red Mass celebrated Oct. 1 at the Cathedral of the Immaculate Conception in Fort Wayne.

Click here for coverage of the South Bend Red Mass.

The Masses for the Fort Wayne and South Bend areas were organized by the St. Thomas More Society groups in each city. The patron saint of attorneys was an English lawyer, author and leader who was beheaded because he refused to take an oath agreeing that King Henry VIII was the head of the Church and that he could annul his marriage to one wife and make another woman his queen.

Red Mass participants pray for the Holy Spirit to strengthen and guide attorneys, judges and those working in the legal profession. The tradition began about 1245 in Paris and spread throughout Europe and later to America. 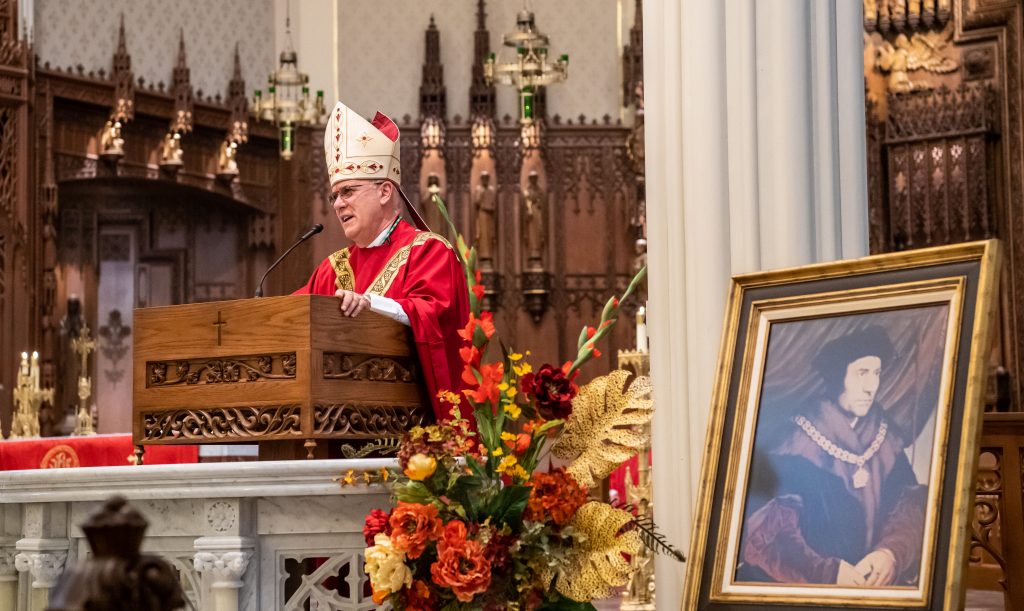 Bishop Rhoades preaches during the Red Mass at the Cathedral of the Immaculate Conception. — John Martin

About 80 people attended the Mass, celebrated by Bishop Kevin C. Rhoades. The bishop also celebrated a Red Mass Sept. 30 at the Basilica of the Sacred Heart at the University of Notre Dame.

In Fort Wayne, the bishop preached about how the Holy Spirit comes alongside people to encourage and lead them.

“One of the gifts of the Holy Spirit is wisdom,” he said. “We need lawyers and judges who are men and women of moral wisdom, of good moral character, who strive to live as disciples of Jesus not only at home or at church, but also at work. This means living for love of God and neighbor.”

That can be difficult if laws are unjust, such as those permitting abortion or euthanasia.

“We have a moral duty to God and neighbor to refuse to take part in committing an injustice,” he said. “Just because a civil law permits or requires an evil action, that does not take away our responsibility not to participate in it.” 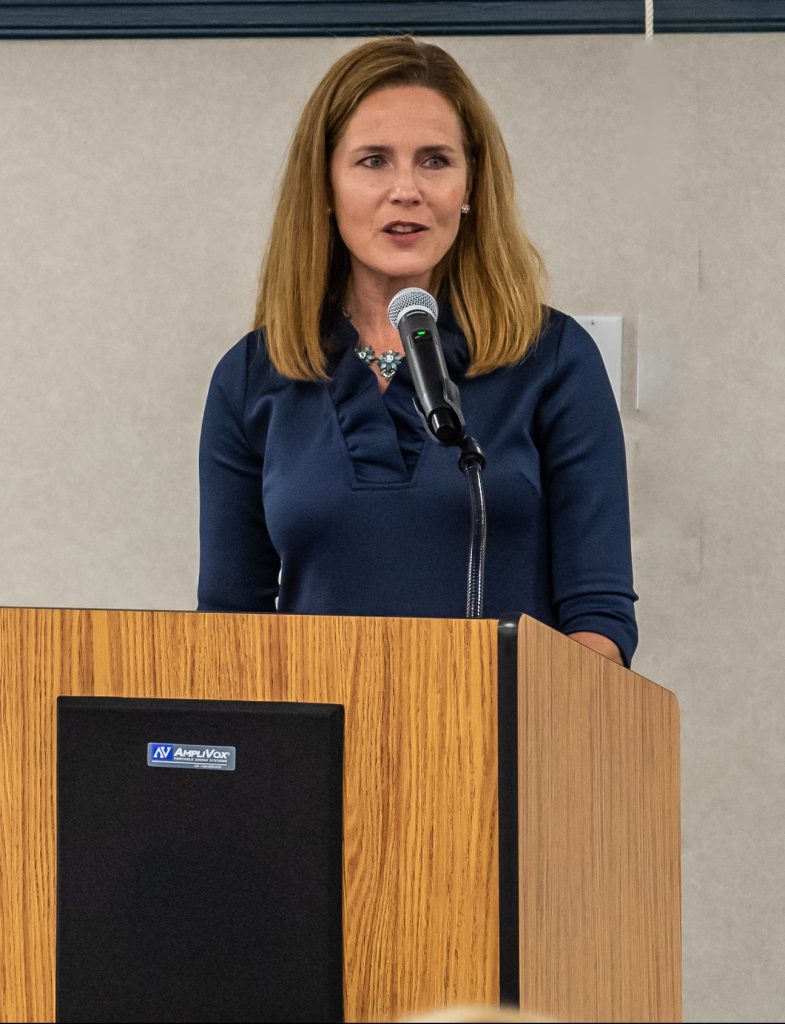 Following the Mass, above, Federal Judge Amy Coney Barrett addressed local legal professionals. Coney Barrett is judge on the U.S. Court of Appeals for the 7th Circuit and a professor at The Law School, University of Notre Dame. — John Martin

During dinner at the Archbishop Noll Catholic Center, two blocks from the cathedral, Judge Coney Barrett spoke about overcoming obstacles in one’s personal and professional life.

“What if the obstacle is more important than the route I have planned?” she asked rhetorically.

Coney Barrett, of South Bend, is a judge on the U.S. Court of Appeals for the 7th Circuit and a professor at The Law School, University of Notre Dame. And like most people, she dislikes obstacles. However, she noted that the Bible’s parable of the Good Samaritan offers good advice about dealing with them.

The parable tells of a priest and Levite who both saw a man on the roadside who had been injured by robbers, and both passed by him. The Samaritan could have passed by, but he saw that stopping and caring for the injured man was more important than continuing on his trip, Coney Barrett said. 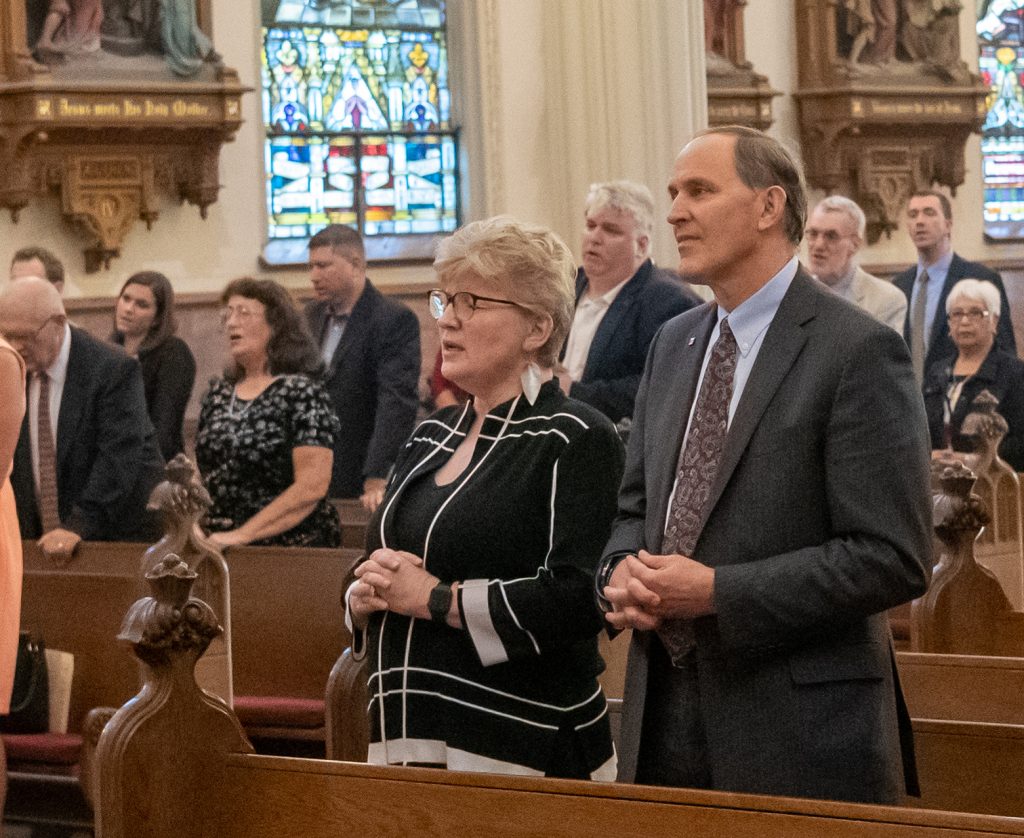 Worshippers stand during a Red Mass Oct. 1 at the Cathedral of the Immaculate Conception, Fort Wayne. Red Masses are celebrated annually in the diocese for those in the legal profession. — John Martin

People don’t always get to choose their obstacles, though. St. Thomas More, for example, led a successful and accomplished life; but he made a far greater contribution to the world by choosing to become a martyr for his Catholic faith, she said.

“Thomas’ death, like the death of every martyr, carries the power of redemption.”

In closing, Coney Barrett added: “May we lawyers, who are a driven lot, embrace obstacles and transform them into something beautiful.”