You might say that Scouting roots run deep in the Modlin family.

First there was Matt Modlin, who rose to the Boy Scouts of America rank of Eagle Scout during his years at Mishawaka’s St. Monica School and Mishawaka High School.

Then there was Stephanie, his high school sweetheart and classmate at St. Monica, who learned that if she was going to spend any time with the love of her life during summer breaks from college, Scouting would be involved.

“I became involved with the Venture program, which is coed, so that I could be with him at Camp Tamarack in Michigan City,” Stephanie said. She ran the camp trading post, and her future husband was the waterfront director when the two were in college.

After they married in 2005 and started their family, Scouting continued to play a part in the life of their family. 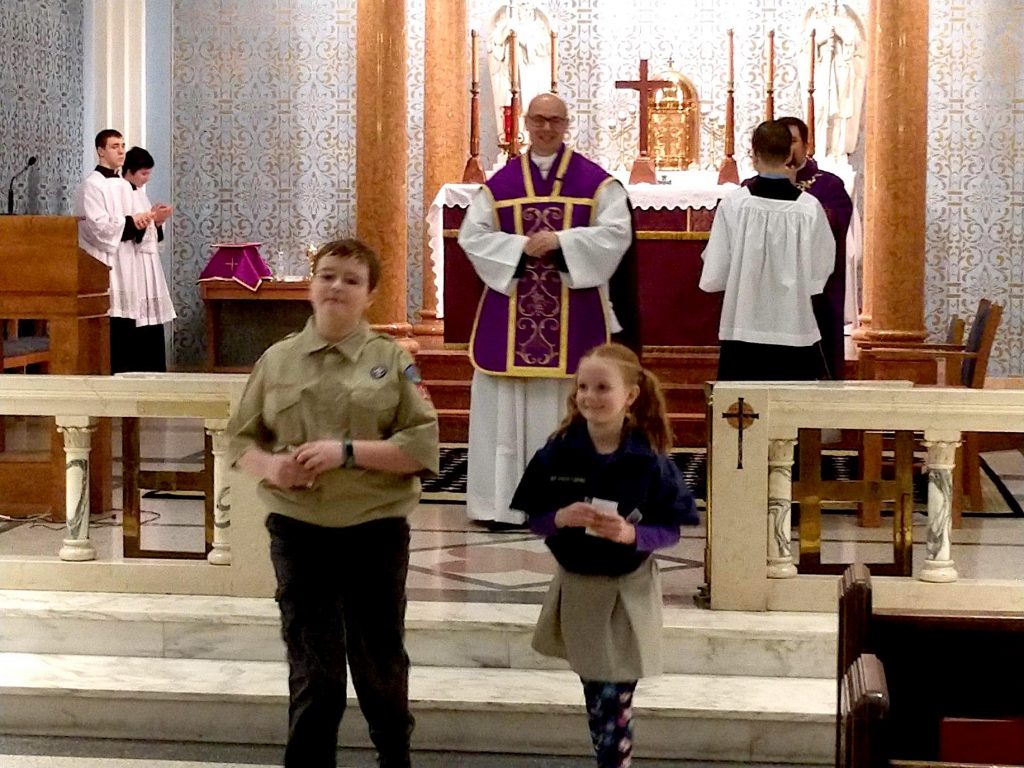 Christopher Modlin, left, and younger sister Anna, who is 7, received awards and emblems at a recent Mass at St. Monica Church this spring. Anna is the first female in the Diocese of Fort Wayne-South Bend to earn the Catholic Scouting emblem for first- and second-grade Scouts.

Son Christopher, who is 11 and in fifth grade, started in Scouting when he was in first grade and recently earned his Parvuli Dei award. “It means children of God,” he explained proudly.

During the same Mass at St. Monica Parish, Father Jacob Meyer awarded younger sister Anna, who is 7, the Light of Christ emblem, making her the first female in the Diocese of Fort Wayne-South Bend to earn the Catholic Scouting badge for first- and second-grade Scouts.

Last fall, Boy Scouts of America began welcoming girls into its ranks and has turned to calling the program Scouts BSA. While programs like Venture that Stephanie Modlin joined back in her college days have been open to females for a number of years, Scouting badges and the rank of Eagle Scout weren’t available. 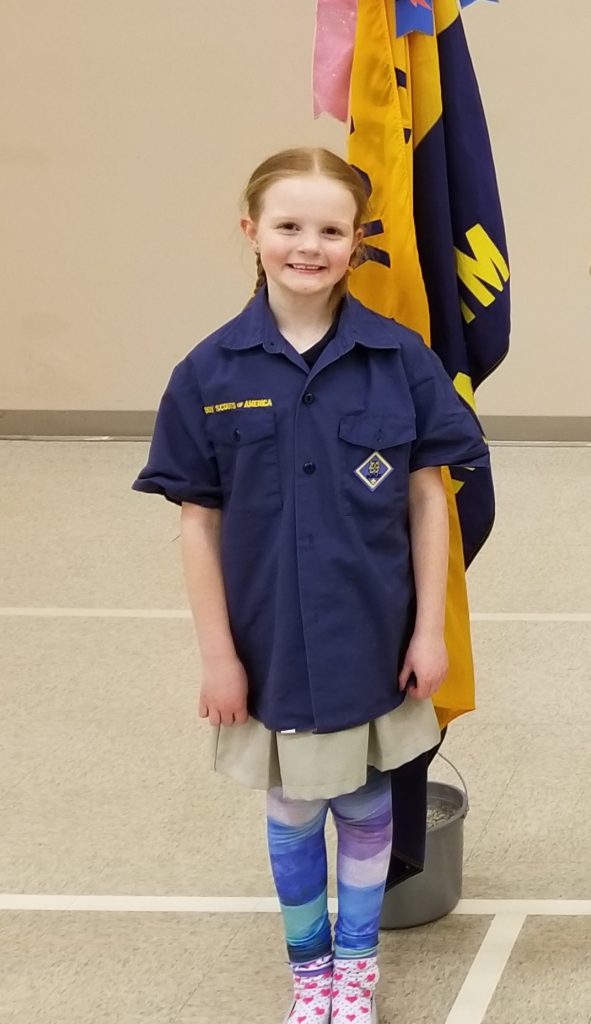 Anna carries on a Scouting tradition established by her parents, Matt and Stephanie Modlin.

Anna, a second-grader, thinks this was the perfect time in her life to work on the faith formation award, since she also was preparing to receive her first holy Communion at St. Monica May 5.

She showed off the workbook that guides Scouts through the Light of Christ program, stopping at the drawing of her family. “Father Jacob added the halos,” she noted.

Anna enjoyed learning about her faith and its sacraments. “I learned about Jesus’ family and how it was like my family.” One of her favorite activities was learning about the different features of a church, like the tabernacle and the baptistry.

Christopher talked about doing a Scouting activity with his family when each person talked about the special gifts of the others. He especially liked that his mother, a math and science teacher, noted his aptitude for math. He also enjoyed accompanying his grandmother, Beth Horban, on her rounds as a eucharistic minister to homebound parishioners as part of his service to the parish community.

After each Scout completes the program with his or her family, they meet with their parish priest to review what they have learned.

Father Meyer has worked with Scouts since his days in the seminary, Laura Ray of the Diocesan Catholic Committee on Scouting said. “He’s an old hand at the work of the DCCS.”

“With Scouts BSA being such a new program, we are still trying to get the word out to new female Cubs that they are eligible to earn these Catholic emblems,” Ray said. “The parents don’t always realize the programs exist, but when their children work on them with the family, they are mostly amazed at the fun they all have sharing their Scout’s faith journey.”

Anna seems unfazed by her status as the first girl in the diocese to earn a Scouts BSA religious emblem. She liked doing the work, she said, and learning more about her faith. She also likes being part of something that her parents and her brother treasure.

“Scouting has always been family-oriented,” her mother added. While Matt, an administrator with South Bend city schools, has retired as a cubmaster, the family plans to continue activities like the family camping trips with Scouts BSA.