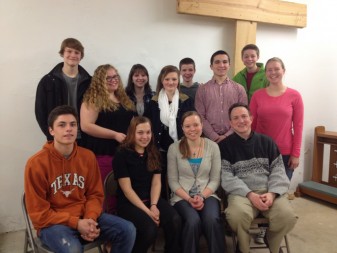 FORT WAYNE— A team of 11 high-school and college students known as Catholics on a Mission traveled to the mission fields of Costa Rica from June 29-July 10. There they hosted several Vacation Bible School (VBS) sessions for children and shared their personal faith testimonies with the local Costa Ricans, the Ticos — Spanish-speaking townspeople — and the indigenous Cabecar people in the mountains. They also gave food, love and dignity to homeless men and women in Turrialba and San Jose.

Most people in the vast region only receive the sacraments once a month due to the shortage of priests. But Mass could be celebrated daily since Franciscan Father David Mary Engo — along with 12 Franciscan Brothers Minor from Our Lady of the Angels Friary, Fort Wayne — also made the arduous journey. In addition, Franciscan Mother Collette Marie, and Franciscan Sister Bernadette accompanied the group on the trip. The 12-day mission team included four lay adult leaders, 30 in all.

“I was most impressed by the joy of the people,” said student team member Clair Wyss. “They were so friendly and welcoming. Even though they often had no clue what we were saying; they all were so receptive.”

“I, too, was most impressed with the people’s openness,” added student Jacob Schmitz. “I was in awe of the love of the people toward us.” But what moved him most was seeing the poverty of the people. “It made me feel grateful for what I have, and really empowered me to realize these people need help. They are poor in spirit and in material things as well.”

“What moved me the most was working with the indigenous people up in the mountains,” added Wyss. Unseen by tourists, the Cabecar homes consist of dirt floors where shelter is shared with their animals. “They’re pagan people, never having heard of the true God all that much. We put on a VBS for the kids and the thing that touched me the most about that and was kind of the highlight of my trip was to teach these kids about God. At first their eyes were dull and they were looking down, but by the end they were singing ‘Jesus Loves Me.’ You could just see the light in their eyes. Grace permeated the whole trip. God’s hand was there taking care of us,” she concluded.

Beginning last April, the students reached out to family and friends to raise nearly $40,000 in about eight weeks, mostly from pledge letters asking people to underwrite one day at $40 or sponsor a half day.

Catholics on a Mission is a student-driven organization working from the Fort Wayne area evangelizing parishes, cities and the world through corporal and spiritual works of mercy. Currently, the team consists of approximately 20 students from about nine area parishes who meet every two weeks throughout the year for an hour or two and minister to the poor and homeless in the Fort Wayne area.

According to Dave MacDonald, an adult leader from St. Jude Parish, Fort Wayne, the group embraces the call of the Church to evangelize, and empowers high school and college students to explore the missionary and religious life through hands on experience.

Locally, Catholics on a Mission serves the homeless community in downtown Fort Wayne.

“It’s really a team effort,” MacDonald said. “Individuals and parishes collect gently-used seasonal clothing, portable snacks and toiletries and drop them by my office each week. Another group makes over a hundred sandwiches — last week it was students from St. Joseph Catholic School, Garrett.”

“While the clothing and food are important, we’re really sharing Christ’s love, dignity and respect with our brothers and sisters who need them most,” MacDonald noted.

In December 2012 a group of nine students and four adults — along with Father Engo and five Franciscan Brothers Minor from the Fort Wayne friary — experienced the team’s first 12-day mission to the poor, remote jungle areas of Costa Rica. The inspiration for the initial trip came about when several high-school students, many home-schooled and actively involved in the Franciscan Brothers Minor youth group, approached Father Engo with an idea.

Dave MacDonald accompanied the team, which included his daughter, Emma, to Costa Rica last summer. His wife, Jennifer, and Emma, journeyed there with a team last December.

As the Costa Rica mission was drawing to a close, MacDonald related that he wondered what would be next for each of the team members.

“Maybe some will be called to a life of mission work or the religious life,” he mused. In fact, Anna and Rebecca Doctor, and Katlyn Fischer, have all joined the Franciscan Sisters Minor order he related.

“Each had been discerning the religious life. Anna planned to join before we left. Rebecca had been a cloistered Sister of the Poor Clares and Katlyn visited a few orders including Mother Teresa’s in New York City,” he said.

“Each of us has been changed in ways yet to be realized,” he concluded.