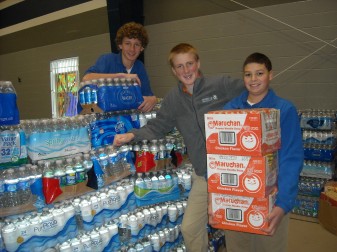 MISHAWAKA — Seventh graders from the three Mishawaka Catholic grade schools that will become one school in 2011 showed their unity by working together to assist the St. Vincent de Paul Society of St. Joseph County at its busiest time of the year.

Those seventh graders from St. Joseph, St. Monica and St. Bavo Parishes will become the first eighth-grade class for Mishawaka Catholic Academy when the new school opens in fall, 2011 in each of the existing grade school buildings. Pre-K through second-grade classes will be at St. Bavo, third through fifth grade at St. Joseph and sixth through eighth grade at St. Monica.

Ramesh contacted several agencies about the students volunteering together, but most agencies did not have enough work and/or space for a large number of students. Then Ramesh talked to Dale Seely, volunteer coordinator and pantry manager at the St. Vincent de Paul Society of St. Joseph County.

Seely told Today’s Catholic that he was expecting the largest delivery of food donations that the pantry gets all year to arrive on Dec. 14, so he was eager to have the students come on Dec. 15 to sort and pack the food. And in keeping with the Mishawaka theme, it so happens that the pantry’s largest donation of food each year is from Mishawaka Marian High School, the school many of the seventh graders will attend after graduating from Mishawaka Catholic Academy in 2012.

“Marian has been collecting for St. Vincent de Paul for many years, more than 17 years,” said Erin Pierce, a theology teacher at Marian. “We usually collect 20,000 to 25,000 food items, as well as a money collection, which is usually somewhere between $1,100 and $2,000.
“The Marian students really show their generosity and compassion for others in this food drive,” Pierce said.

Seely said that it took three trucks to carry all the donated food from Marian to the food pantry, which supplies parish food pantries all year long and accommodates walk-in clients two days a week.

“Thank heaven the food drives were productive,” Seely said. “We’ve been able to keep up on demand, with a few exceptions — for the most part able to keep up with staples.”

When the seventh graders arrived, three truckloads of food were waiting to be sorted, packed into boxes and carried to pallets. In all, 43 seventh graders worked for two hours on what Seely said was a productive assembly line that far exceeded his expectations.

“They packed 285 boxes,” Seely said. “They got more done than I anticipated, and I think they had a good time.”

Ramesh agreed, saying that the students worked very well together, enjoyed being together, and really “bonded.”

The students also have a new project to think about working on together. Charles Thompson, executive director of the St. Vincent de Paul Society of St. Joseph County, greeted the students when they arrived and led them in a prayer before they began their work. Then he suggested to the students that they start a Young Vincentians chapter at the new Mishawaka Catholic Academy next year.

With the enthusiasm of these seventh graders, that will probably be one of many fine accomplishments they will undertake together at their new school. 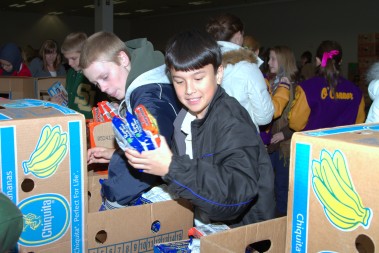