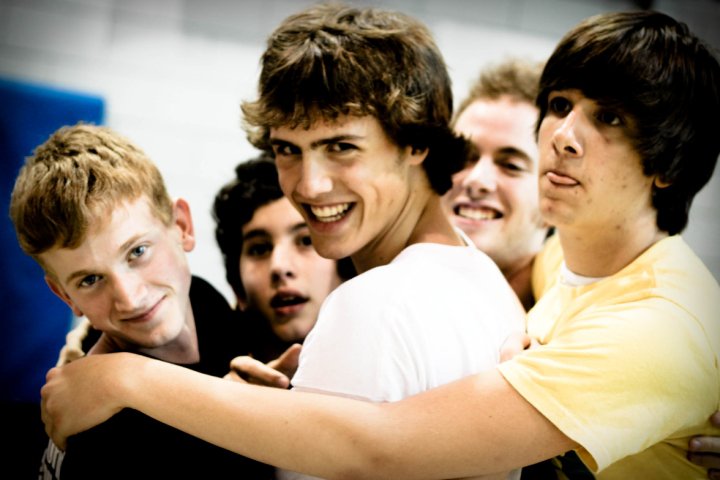 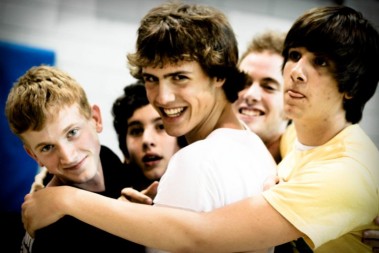 These teens play a game on an Antioch Retreat in May at Queen of Peace Parish. They are from left, Michal Christleib, Michael Shakour of St. Anthony Parish, Francis McDonald of St. Pius X, Edward Manier of Holy Cross Parish and John Banes of St. Bavo.

MISHAWAKA — A new kind of youth ministry is taking Mishawaka by storm. Built around the national program, the Mishawaka area Antioch is a viable program that attracts private and public high school students from the surrounding area.

The Mishawaka area Antioch had its humble beginnings at St. Jude Parish several years ago under the faithful formation of Father James Stoyle, pastor there. Pulling youth from the surrounding parishes, who were unable to financially sustain their own youth ministries, Antioch offered biannual retreats and regular youth meetings there. With the transfer of Father Stoyle, Father Barry England took Antioch under his wing. Over the past several years the program has flourished, moving, as the spirit does, to areas it is most needed.

Today under the auspices of an enthusiastic young married couple, Chip and Virginia Leinen, the youth ministry in Mishawaka has transformed into a community youth ministry that invites youth from St. Bavo, Queen of Peace, St. Monica and St. Joseph to deepen their faith formation. “All the pastors are on board. For us to have four phenomenal priests gives us such security and allows us to be firmly rooted in the ministry,” says Virginia.

As newlyweds the Leinens became involved as volunteer facilitators under the leadership of Gus Zuehlke, pastoral associate at St. Bavo, at Antioch retreats about seven years ago. “I’d never experienced anything like that before,” says Chip of the retreats. Soon Chip, Marian High School alum and the full-time hospital computer systems administrator, was teaching summer religion classes at St. Monica in addition to assisting with Antioch retreats. “Chip is the theological guru,” says his wife, Virginia, adding, “I am comic relief.”

As the program changed hands and locations the Leinens were asked to direct its growth three years ago. “We kept the structure the same,” reports Chip, who says the witness of love for the Church shown by the previous leadership gave them the best preparation for their new roles as directors. With the blessing of Bishop-emeritus John M. D’Arcy and Cindy Black, director of the Office of Youth Ministry, the Antioch program has become the official citywide youth ministry. And the Leinens admit to becoming “bold warriors, Jesus freaks,” as they share their faith with the teens they hold so dear.

Currently the Antioch retreats are the springboard conversion event that invites the youth into a relationship with the Lord. “It’s an opportunity for teens to see others who are in love with their faith,” says Chip. During the weekends teens experience witness talks, time for prayer, music, games, skits, reconciliation and the Eucharist. The fall retreat is held at St. Bavo Parish, while the spring retreat is housed at Queen of Peace.

The heart of the retreats, says the Leinens, is the Eucharist, along with catechesis and community. “Eucharistic Adoration is at the center,” says Chip. “We try to promote that more than anything else.” Following the retreats the youth are invited to St. Joseph Parish’s Saturday evening Eucharistic Adoration from 8:30-9:30 p.m., where parishioners will witness the presence of up to 25 teens in reverent prayer.

Catechesis and community come to the youth in weekly praise and worship meetings, held at the convent of the Franciscan Sisters of Perpetual Adoration in Mishawaka where the teens gather to learn about and discuss their faith more fully. “This is a place where the teens receive unconditional love and affirmation. Then they can go back to school and know they have a back up,” says Chip.
And as the teens grow in faith, they have the opportunity to assist with future retreats. Teams are formed for specific tasks, including a prayer team, whose sole responsibility is to pray for the spirit’s movement during the weekend.

The all important weekly meetings held throughout the year consist of a social time, praise and worship, a theme-based talk and an activity or small group discussion. Recently the Leinens have discovered the Life Teen ministry and have begun to use it as a resource and support for their youth program.

Virginia, who has a degree in special education and is mother of three children, can’t say enough about the teens who attend the program. “They are awesome teens.” she says.

And she sings the praises of the Antioch core team, Nate Krakowski, Christa Shoemaker and Ellen Meyer, who she admits are indispensable to the program. “Without them we could not do this. They love the Lord and their witness to the teens is wonderful,” she says. And, of course, the program runs smoothly with the assistance of parents who provide food and housing as well as discussion coordination at the retreats as well.

Other avenues offered to the youth for faith formation include a youth Mass held the third Sunday of each month at St. Bavo. A middle school program meets at St. Joseph Parish and Queen of Peace welcomes teens for Bible study and XLT meetings through the year. An annual trip to the national youth conference held in Steubenville, Ohio, inspires over 50 teens each year. Proof is in the joyous news that three young men from this program have been accepted into the seminary this year. “The program has transformative power,” says Chip passionately.