Jack Senger delivers more than the parcels he transports nearly every day for United Parcel Service; he has also been delivering a strong message of faith to his four children. The Senger family has had more than their share of challenges, but through those challenges one thing has remained central — their Catholic faith.
“I always tell the kids God is their first father, I’m their second father,” Senger said.

Jack and his wife, Julie, have four children between them—Jamie, 26, from Julie’s first marriage; Lindsey, 25, from Jack’s first marriage with now-deceased wife Chrystal; Jarrett, 15, and Jenna, 12. He has been a driver for UPS for 32 years, and he met Julie on a blind date fixed up by another customer on his route. He discovered he’d delivered to Julie’s house, too. He related that Julie said she’d been praying for a man who’d accept Jamie as his own.

Senger said Julie was protective of Jamie at first. But, according to Jack, when Julie saw how well they got along and how he treated Jamie, she relaxed.

Senger was born and raised Catholic in South Bend, and attended St. Jude Parish. He moved to Millersburg in 1999 when he and Julie married, and the family attends St. John the Evangelist Church in Goshen.

Aside from Jamie’s autism, the Sengers encountered other personal and family obstacles. When Jenna was born in 2004, Jack could tell right away that there was something different about her. “She looked like she might have Down syndrome.” 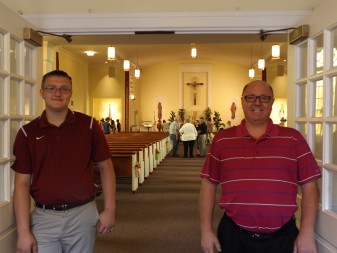 Senger said they had an “amazing pediatrician,” P.J. Whalen, who also attended St. John and spent several hours with Jenna when she was born. He also connected the family right away with the Elkhart County Down Syndrome support group — an organization in which the family is still actively involved.

When Jenna was 2-1/2, her intestine ruptured. “That was a big scare — we thought we were going to lose her,” her father said. But they turned to God in prayer, and Jenna pulled through.

When Jarrett was about 10 years old, they discovered he had cysts. They turned out to be benign, but it was traumatic for a while. The family took him to Riley Children’s Hospital, where they prayed with the doctors. Although it was an outpatient surgery, Jarrett was in pain: so they stayed in a hotel, with Jack going out in pouring rain to get him a heating pad and medication.

Jamie faces brain surgery this month to remove a rare brain tumor. They have been told it’s noncancerous, but the doctors are not sure if it’s possible to remove all of it. Once again, the family finds itself relying on God and turning to each other and to their parish family for prayers.

When asked if their seemingly larger share of challenges gets discouraging at times, Jack replied that he wouldn’t say discouraging; but admitted they do get scared. This latest health issue has been particularly frightening for Julie and for Jamie, who has had the most problems.

“We both help each other through the hard times. We put it in God’s hands. We pray that God will provide the doctors with the knowledge to help them,” he said. “It takes two to make a marriage work and (manage) the children.”

Prayer is a daily part of this family’s life even when they’re not experiencing a medical crisis.

“At night we all kneel around our bed and pray together. The Our Father, Hail Mary, Act of Contrition and petitions,” Jack said.

Before they travel they pray for safety, and they pray before meals — even out in public.

“Sometimes we get funny looks, but we do it,” he said.

The couple has also set an example for their children by attending Mass with them, attending parish missions and other services, and bringing the children to religious education classes. They’ve also modeled and encouraged service to church and others.

Jack feels his rapport with kids, and he regards his special needs children in particular as “a gift God gave me.”

He was told by Jarrett’s Boy Scout troop leader, ‘You need to be an assistant leader — the kids love you!’ Jack became an assistant Scout leader known, as Jarrett said, for “taking care of everybody and making sure they have what they need and are having fun. No one goes hungry around Jack!”

He tells his kids all the time, “God first” – which includes the church — and family second. (Boy Scouts third, according to Jarrett.)

The couple has also been an example of service to church and others. Jarrett and Jamie are ushers, like their dad. Jarrett was also an altar server. Jarrett has been an usher at St. John since sixth or seventh grade. Jack admits teaching Jamie to usher was a bit more challenging. He does fine as long as he is on the same side of the church; varying from routine throws him off.

When St. John had church picnics the kids would help cook the food, and when Father Steinacker needed to have some meals brought in, Julie would cook — with the kids assisting. Jenna likes to help hand out bulletins, and she always wants to take the gifts up.

When asked his thoughts on keeping our young people Catholic, Senger said: “It takes parents teaching what the church teaches: It also helps if you have a great priest. He’s a help to the families and one who is involved with the youth.”

The couple has also continued to nurture their own faith. Each attended a Christ Renews His Parish retreat at St. John, and they attended a marriage encounter weekend. Jack is also a regular at Rekindle the Fire men’s retreats.

He offered this advice to other dads: “Pray to God to help you; ask for God’s hand to guide you with His Holy Spirit. God will answer your prayers.”