This August, Michael Thomas will be ordained to the Sacred Order of the Diaconate and profess Final Vows with the Community of Holy Cross. God willing, in a year, on Divine Mercy Sunday, he will be ordained a Holy Cross priest. Both sacramental events are incredible witnesses to God’s grace, alive in Thomas’ life.

Becoming a Catholic priest was not an obvious choice for Thomas. Born and raised in Lakeville, he was the eldest of two children who lived in a loving, Christian home. His family faithfully attended Trinity Evangelical Free Church on Miami Street in South Bend, although his mother, Rebecca, was raised Mennonite. Due to his parents’ work schedule, Thomas began his formal education at St. Joseph School, which offered a strong, all-day kindergarten program. He attended there through eighth grade, continuing on to Saint Joseph High School. 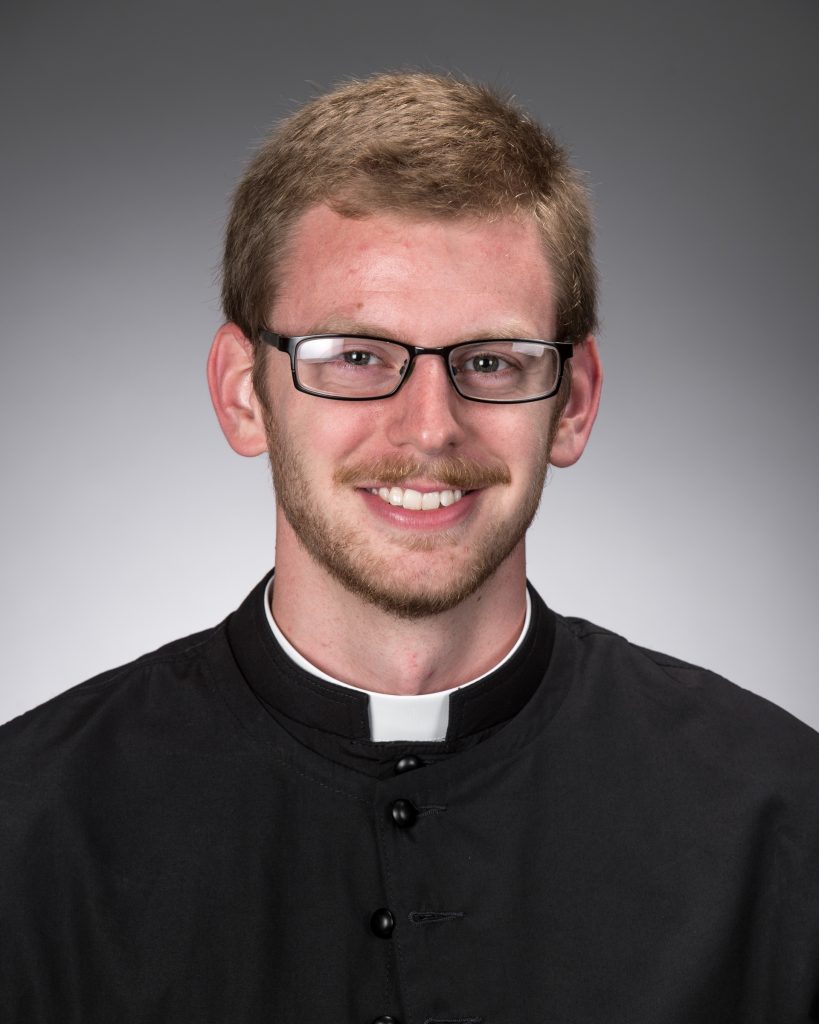 Seminarian Michael Thomas, who is preparing to be ordained a Holy Cross deacon, grew up in a faithful Christian, but not Catholic, family. His journey to the Catholic Church has been one of predominantly grace, he feels. — Photo by Matt Cashore/University of Notre Dame

As one of the few non-Catholic students at his elementary school, Thomas remembers the impact of the catechesis he received as “enrichment, not a big deal.” He was a “pretty religious” child anyway, praying before meals, going to church with his family every week and loving his grandparents, who read Bible stories to him and his younger sister. His grandmother was an American nurse who fell in love with a Lutheran, German theologian and taught herself the language to help edit his papers. Their constant care and academic learning were inspiring for young Michael.

In the third grade, Thomas recalls his teacher asking the students to keep a prayer journal. In it, Thomas wrote, “I want to be a missionary and love God,” drawing a big heart on the page. The religious that he would meet in the school, and their example, captivated him. The character of Friar Tuck in the book “Robin Hood” also caught his attention, and he pondered the friar’s jailing because of his defense and love of the poor. Thomas began to wonder if there were Lutheran monastic groups he could join, thereby combining his family’s faith with the live witness he now recognized.

As he grew older, his imagination became shaped by the different Catholic liturgies and devotions he attended — such as the Stations of the Cross and weekly Mass — even though he did not always participate. But he knew the liturgy, and it slowly and quietly formed him. Around fourth or fifth grade, he remembers asking permission to go pray near the tabernacle in the church, back behind the screen, as “somehow I knew God was there.”

Thomas grew in wisdom and understanding, and his questions of the faith developed as well. “Every question I had, there was way more behind it,” it turned out. In Catholic doctrine class as a freshman at Saint Joseph High School, he loved to argue with his teacher, Jennifer Carrier. He found it interesting how “internally cohesive, in a very sophisticated system” theology was, and “how freedom and sin worked.” Issues of justification, the pope and Mary were still issues from his Protestant upbringing, but he studied and accepted the doctrines well enough to twice receive a school theology award.

St. Adalbert School Principal Joseph Miller, at the time another of Thomas’ theology teachers, remembers suggesting him for the yearly prize and being questioned for the nomination. Miller simply said, “Michael is the best theology student in my class,” because he always had the highest grades and most inquisitive questions. Thomas recalls being proud of “beating Catholics at their own faith” but recognizing that, while he was intrigued, he was still also resisting.

During his sophomore year he read the “Bread of Life” discourses. The question “What good is it if you have faith and don’t have works” intrigued him, as did “So believe in God is one … well done, so does the devil.” Then he realized that the Catholic interpretation of the Eucharist was correct, and the only Biblical interpretation; he began “longing for that.”

His senior year, an apologetics class taught by Kathryn Wales was formative. On an intellectual level, Thomas’ questions had been answered, and he became angry, as he recalls. “It (Catholicism) was all right. … I knew I was going to have to do something.” Joining an Catholic book club, he began reading more apologetics and classic Catholic novels such as “Brideshead Revisited,” and discussing them with fellow students and teachers.

The second semester of his senior year, Thomas said to himself, “If I am going to be a Christian, then the only way that makes sense is to move forward is to become Catholic. Otherwise I will have to decide not to be a Christian. To stay where I am, separate from the Eucharist and separate from communion with this Church, is absurd. I anticipated suffering, and being separated from my family.”

Going down to Bloomington for college at Indiana University to study political science and philosophy that fall, Thomas also joined RCIA. He was welcomed into full communion with the Church that Easter.

With great joy and peace for finally having wrestled and chosen the Truth, Thomas suffered with having to tell his parents. For his mother, it wasn’t about doctrine, but rather all about the family. His mother felt he was being “overly intense. Let other people worry about that,” she said.

As the summers at home between semesters of college were now stressful, Thomas began spending time at South Bend Catholic Worker and the drop-in shelter at Our Lady of the Road. Thomas found a niche serving there, marking friends and discussing theology alongside folding laundry and towels. The summers were “among the happiest times of my life.”

The idea of the priesthood had always been present and “ruminating about” in Thomas’ head. He recognized “receiving gift upon gift” from God during this time of his conversion. Toward the end of college, though, the priesthood “suddenly became a possibility.”

He took a different internship to better pursue a time of “quiet waiting,” and heard God asking then for him to enter the seminary and the priesthood. Eventually he replied internally, “I hear you. I will do that.”

He was suspicious of his own zeal as a new convert, but speaking to other Holy Cross priests, such as Father Drew Gawrych, CSC, allowed him to freely enter the Community of Holy Cross in 2011. “I was drawn to Holy Cross by the holiness and happiness of the Holy Cross religious and seminarians I knew — I wanted that life! The emphasis on community life and the mission to education” also resounded with Thomas.

He spent his novitiate year in Colorado Springs, Colorado, with much quiet, prayer and “the great gift of a wood chopper,” cutting up logs. He found through “even tough things, or times or nervousness, an energy to carry through it.” Returning to South Bend, Thomas was able to spend time once again with his dear parents and sister, grateful for their constant love and desire to be close.

The past years of continued discernment at Moreau Seminary have continued to be a great gift for Thomas. “The past four years have been beautiful and difficult — I see I have learned how to love God and give thanks to God. I continue to imagine how to give my life back to Him. I dearly love South Bend, and there is no place I would rather be right now.”

Thomas currently lives out faithful witness to Christ, studying for his master of divinity degree and serving at St. Adalbert and St. Casimir parishes in South Bend. He helps in both the parish and school, transforming the youth group with Father Ryan Pietrocarlo, CSC, as well as teaching catechism and leading retreats for faculty and staff. Thomas is grateful for the wisdom, witness and brotherhood of an incredible community of Holy Cross men at the parish, namely Father Paul Ybarra and Father Pietrocarlo, as well as fellow seminarian Pablo Quan.

Currently Thomas is a fourth-year seminarian, in his final year of theology at the University of Notre Dame. He will soon take further steps to continue the life of grace offered so lovingly, so continually by the God that knows well the plans He has for him. Thomas continues to be most grateful, he said, for the “beautiful life” offered to him.