“We put ourselves under the protective mantle of our mother, Our Lady of Guadalupe, and at the service of those possibly affected by the earthquake,” the Mexican bishops’ conference said in a tweet shortly after the June 23 tremor.

“God will continue to care for us and protect us,” said Archbishop Pedro Vazquez Villalobos of Antequera Oaxaca. “But here we have to learn many things, too. Let’s take care of our spaces, our buildings, our homes. It’s important that we maintain them so they resist these temblors.”

At the Vatican the following day, Pope Francis prayed for quake victims. “May the help of God and their brothers give them strength and support. Brothers and sisters, I am very close to you,” he said. 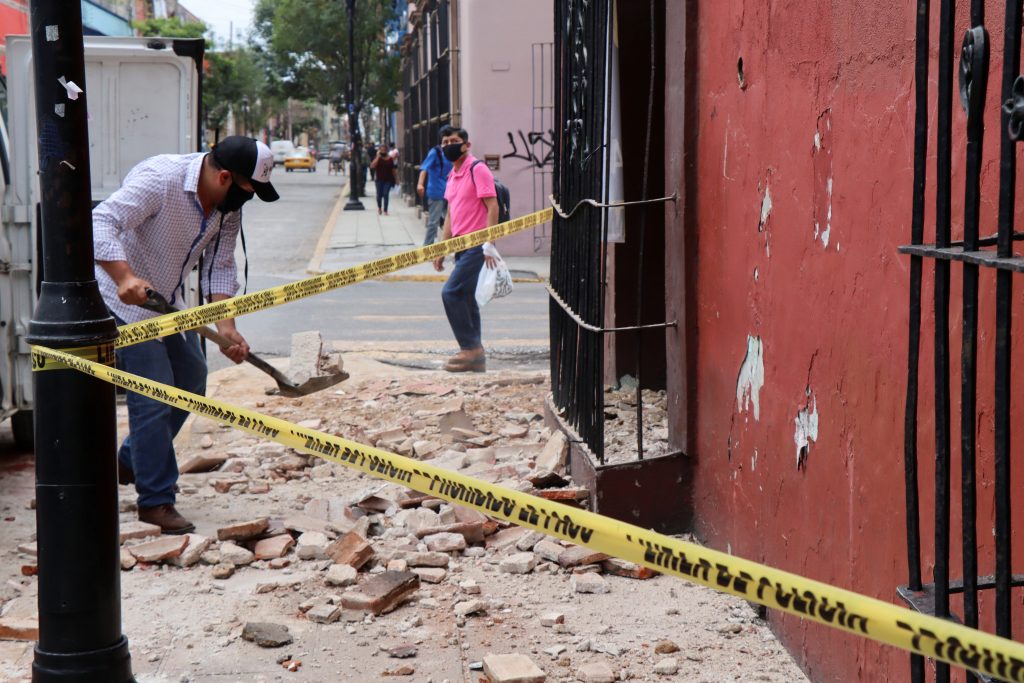 A man clears debris from a damaged building in Oaxaca, Mexico, June 23, 2020, following an earthquake. The quake struck as COVID-19 cases are increasing and people are wary of going to the hospital. (CNS photo/Jorge Luis Plata, Reuters)

The magnitude 7.4 earthquake struck just before 10:30 a.m. with an epicenter near the resort city of Huatulco on the Pacific coast of southern Oaxaca state.

Two people died in collapsed buildings, while another had a wall fall on him, said Gov. Alejandro Murat. An employee also died at a Pemex refinery in Salina Cruz, according to the company.

One hospital suffered damage in Oaxaca and patients — including those treated for COVID-19 — were to be moved, the governor said.

Socorro del Rio, director of Crecemos, a nongovernmental group working in Oaxaca, told Catholic News Service, “It’s an area where there have been frequent earthquakes, so these communities are very sensitive to these situations … of such strong disasters.”

The earthquake struck at a difficult time in Mexico, where the COVID-19 pandemic is spreading and, according to del Rio, especially affecting rural regions. In some areas, “the health system is collapsed” and many people are wary of going to the hospital, she said.

The earthquake was forcefully felt in Mexico City, where people were given 62 seconds warning and scurried into the streets — but only two serious injuries and 36 damaged buildings were reported, according to the local government.

Damage was reported in the Huatulco region, but on a much smaller scale than during twin earthquakes that registered 12 days apart in September 2017. The first of those leveled parts of Oaxaca and Chiapas states. The second earthquake rocked Mexico City and central Mexico, killing more than 300 people and damaging property, including many churches.

Approximately 30%-40% of the damaged churches in the Diocese of Tehuantepec, which includes Huatulco, have been fixed since the 2017 earthquake, said Father Jose de Jesus Gutierrez, diocesan spokesman.

“We’re surviving and we have to help people with soup kitchens and community kitchens,” he said. “What’s needed more is a reconstruction of the social fabric and the emotional part for people and families.”