Where sin abounds, grace abounds all the more. These memorable words from St. Paul’s Letter to the Romans remain equally true in the present day and life of the Church. While waves of confusion, disharmony and persecution may appear to threaten the unity of the faithful, God nevertheless continues to provide opportunities for the Church to become stronger and more hopeful than ever before. 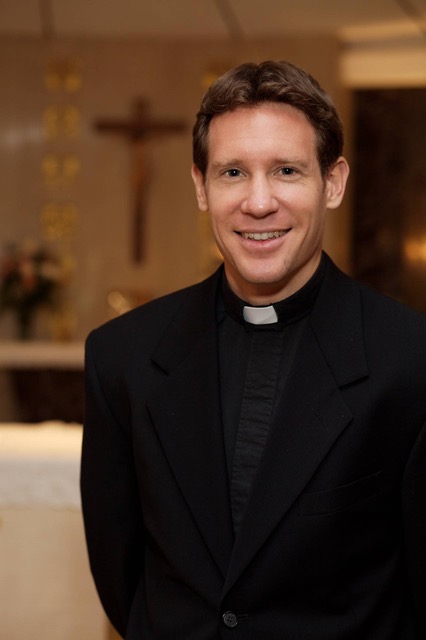 This is the core message of Father Michael Gaitley, a priest of the Marians of the Immaculate Conception whose name has become synonymous with Marian Consecration and Divine Mercy. It was Father Gaitley’s popular book, “33 Days to Morning Glory,” which, at the encouragement of Bishop Kevin C. Rhoades, led over 12,000 members of the Diocese of Fort Wayne-South Bend to make personal consecrations to Jesus through Mary in 2014. A few weeks from now, Father Gaitley will be returning to the diocese in order to lead a “Mary and Mercy Retreat” that seeks to bring men and women of varying faith levels into an even stronger relationship with Jesus and Mary through the examples of several famous saints.

The Mercy and Mary Retreat will take place on March 8-9 at St. Pius X Church in Granger, with opportunities for Mass, eucharistic Adoration and praying the Divine Mercy Chaplet, along with personal testimonies, lunch, a book signing and more.

Since the conference will bring together men and women already familiar with his writings as well as individuals who have not yet encountered him, Father Gaitley emphasized that “This retreat is for anybody: for those who have read, it’s going to take them deeper; and for those who are new, it’s kind of an introduction that will give them the big picture of the spirituality that ‘Now is the Time of Mercy!’ as St. John Paul II taught.”

He explained: “This is a time of great and extraordinary grace, and the retreat is about how to tap into those graces that God is giving to the world and to the Church. This resonates with a lot of people because they see a lot of the challenges, struggles and difficulties that mark the modern world. It’s really a message of hope that people are excited to hear.”

Father Gaitley also shared his enthusiasm to visit the diocese because of the success of the previous Marian consecration. He believes Fort Wayne-South Bend “is particularly primed for a retreat like this because it had such a time of grace during the diocesanwide consecration, which saw a huge response from both parishioners and priests.”

While Father Gaitley will be the primary retreat master leading the discussions, he indicated that these are also unique experiences because of the involvement of the Marian Missionaries of Divine Mercy. These missionaries are men and women who live in community and commit to an intentional period of discernment, evangelization and outreach to the marginalized. Father Gaitley, who serves as the Missionaries’ formation director, exclaimed, “I have the joy of bringing the missionaries with me, and those in attendance get to experience this spirituality. They don’t just hear some talks and leave and forget everything. Rather, they come, hear the talks, and have a lot of momentum for bringing it into their daily lives.” He explained that this occurs by providing “practical actionable items” that offer tangible ways of participating in this spirituality and even becoming missionaries in their own lives.

The retreat was coordinated by Barb Williams, a St. Pius X parishioner whose daughter works for the Marian Helper’s Association, the primary lay outreach apostolate of Father Gaitley’s religious community. She shared that “Father Gaitley expressed an interest in coming to the diocese, particularly because of Bishop Rhoades’ Marian consecration and the success it had.” Williams and fellow parishioner Lori Giovannini spoke with St. Pius X pastor Msgr. William Schooler, who indicated that he would be happy to host Father Gaitley and his team of Marian Missionaries.

Williams, who attended one of Father Gaitley’s conferences in another state to prepare for the event here, shared that “Father Gaitley has an incredible way of unpacking the complex teachings of saints, especially St. John Paul II, St. Maximillian Kolbe, St. Mother Teresa and St. Thérèse, in a very relatable way. He really wants to reach out to people and communicate that Mary is our Mother and if we turn to her, she will help lead us to Jesus and His merciful love and help us grow in holiness to be the people God created us to be.”

Therese Hurford, who helped coordinate the retreat Williams attended, shared her own appreciation for Father Gaitley’s emphasis on concrete action. She explained that this occurs through a focus on “Mary, mercy and community” by which people come to know and trust in the mercy of Christ through a relationship with His mother and then go out to perform corporal and spiritual works of mercy. She further shared her confidence that people of various perspectives and positions of faith will be able to be enriched and “go deeper” through this retreat.

While registration is still open, spaces are filling quickly. In order to reserve attendance or to learn more, visit stpius.net/mercymaryretreat. The cost is $50 per person for the Friday evening and all-day Saturday experience.

The event is sponsored by Redeemer Radio and the Diocese of Fort Wayne-South Bend Office for Adult Faith Formation.