To walk into a darkened church and hear the harmony of voices united in medieval chant enhances the sacredness of the house of God. Preserving that sacredness is one reason why the men who belong to the Schola Cantorum Confraternity of St. Joseph continue to meet, and why they continue to offer their prayers through song.

Most the group attends St. Thomas the Apostle Parish in Elkhart. They meet there to practice, but the schola is not a ministry of St. Thomas. It started in 1993 and developed from a group of men who met monthly — the Confraternity of St. Joseph — for prayer, education and social time. 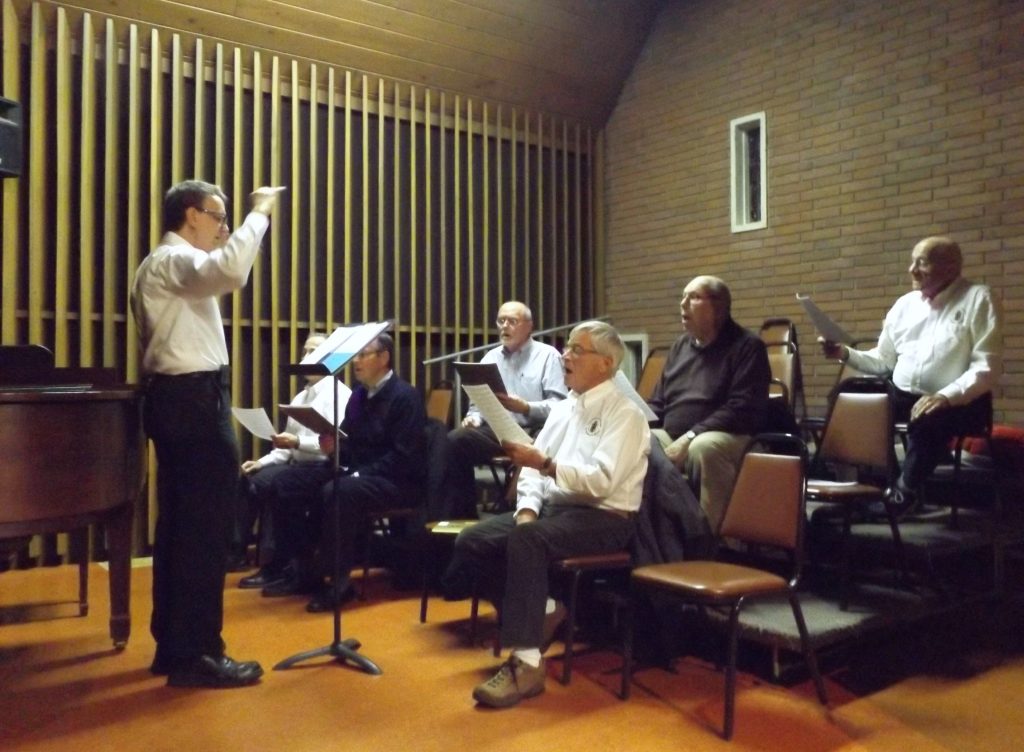 Dr. Tom Sutula leads several members of the Schola Cantorum Confraternity of St. Joseph as they practice recently at St. Thomas the Apostle Church in Elkhart. Seated in the bottom row, from left, are Robert Borrelli, Tom Kolakovich and Ron Rudin. In the middle row are Bob Reese and Cy DeVliegher. In the back row is Larry Scalise.
Members of the group have been singing Gregorian chant together for over 20 years.

Letherman was the liturgist, and he started writing all the psalms for the group. Dr. Tom Sutula, who leads the group now, said, “Jim was classically educated — a Latin scholar. He taught Latin at Marian High School. He wrote all his own music for all his songs. We have a huge library of Jim’s compositions — he wrote songs for everything.”

About a dozen men began the group, and many are still involved. Sutula said when everyone is present they total about 19 members, but with the busy life each leads it’s hard to get everyone together all the time.

Cyril De Vliegher, or “Cy” to the men, attends St. Joseph Parish in Mishawaka and is a former Marian High School principal. He attended St. Meinrad Seminary and School of Theology, and previously St. Bavo School. He knew Letherman through high school.

De Vliegher tried to start a schola at his parish, but he said there wasn’t enough interest. Letherman invited him to join their Schola Cantorum, and he’s been there ever since. He said that was about five or six years after the group started.

When asked what it is about Gregorian chant that they enjoy, the answers came swiftly. “The sheer beauty of it — it’s simply beautiful,” Scalise said. “It’s prayerful,” “poetic,” and “the three-part harmony sacred music” were other responses.

The group sings mainly during Advent and Lent, and the rest of time for funerals and weddings. They recently performed at the installation of the new president of Holy Cross College at Notre Dame. Over the years, they’ve also been invited to different parishes: St. John the Evangelist in Goshen, St. Mary of the Annunciation in Bristol, St. Vincent de Paul in Elkhart, St. Joseph in South Bend, and the Basilica of Sacred Heart, Notre Dame.

While Letherman was alive, at Christmastime they’d go to area taverns on Friday nights, sing and pass a hat. Sutula said they’d often collect $500-$600 that they would donate to charity. Lucchese’s in Elkhart was a regular venue for them, for a while. They’d also visit area nursing homes after the Advent Mass to sing for the residents. The group now sings during the 11:30 am Mass on the third Sunday of Advent. They also sometimes sing at the 10 am Christmas Mass. During Lent they usually sing on Holy Thursday and Good Friday.

Father Royce Gregerson, pastor at St. John the Evangelist, Goshen, has sung with the Schola Cantorum. As a seminarian, he served during his first summer at St. Thomas.

“I frequently spent evenings at Jim Letherman’s house,” he said, where they discussed theology and other things.

“I had a long-standing interest in sacred music and I sang with them once that summer,” he said. “The interesting thing for me is that I think the first time I sang with the Schola it was at St. John’s.”

Father Gregerson said he first heard Gregorian chant as a freshman at college, at a Latin Mass. He was fascinated, and wanted to learn more.

He auditioned for a schola the first year at seminary, but didn’t make it. After singing with Letherman’s group that summer he made it the following year. He also had the opportunity to lead the schola group at seminary in Rome.

Father Gregerson bid farewell to his friend Jim by joining the Schola Cantorum at his funeral. “It was an honor to sing at Jim’s funeral.”

He likes that Gregorian chant has silence put into the music. “We can be active receptors — that’s a powerful lesson on the liturgy itself. So often we think, ‘I’ve got to be doing something. If I’m not singing that song, it doesn’t count.’ We need to calm down and receive the Lord,” he said.

“It’s great that we have a Schola group in Elkhart,” he said.

De Vliegher said Gregorian chant is “timeless. Latin and Greek go together like hand and glove. It’s so integral and chant is all Scriptural. There’s no better place to encourage you in the Word of God than the simple melody of Gregorian chant. It’s reverential, distinctive and worshipful.”

Member Robert Borrelli said he learned Latin when he was young, and it stuck with him. He also enjoys the company of the group of men who have come together in the Schola Cantorum. “It’s a fraternity,” he said. “We pick on each other a lot.”

Bob Reese said he was a cradle Catholic who was around Latin his whole life, “but I never realized how beautiful it is until Jim interpreted it.”

“We’re still doing this because Jim is with us when we do this,” said Sutula. “He put so much into this we can’t let it come to an inglorious end,” he said.

“Our hope is that people reconnect with the faith they had when they went to church 40-50 years ago,” he concluded. “For the younger crowd, we hope to introduce them to a part of their Catholic heritage they don’t get every day. It’s beautiful, and in many parishes has been lost.”